Founder and co-owner of the Chum Bucket restaurant

Plotting.
Scheming.
Antagonizing and harassing Mr Krabs.
Gloating about his plans and his genius.

Run Krabs out of business by stealing his formula and using it for his own Chum Bucket business.

Rule Bikini Bottom with the help of the Formula and manipulate King Neptune into murdering Krabs (almost succeeded but failed).
Save Bikini Bottom and retrieve the Krabby Patty formula from Burger-Beard while all the while learn the meaning of teamwork.
Save his computer wife Karen.

On & Off Egotistical Mastermind

He is voiced by Doug Lawrence, who also voiced Filburt Turtle in Rocko's Modern Life and Edward Platypus in Camp Lazlo. In the musical adaption, he was potrayed by Wesley Taylor.

The SpongeBob Movie: Sponge Out Of Water

While in the middle of yet another scheme to steal the Krabby Patty secret formula, the formula unexpectedly vanishes after Burger-Beard writes on the magical book he found. After Mr. Krabs and numerous citizens of Bikini Bottom were accusing and berating at Plankton for being the culprit, SpongeBob convincing to them that he's innocent rescues him with a giant traveling bubble as they escape the hostile people who suddenly formed a group of apocalyptic sufferers.

As SpongeBob and Plankton watch Bikini Bottom become an apocalyptic wasteland, SpongeBob tries to get Plankton to become his teammate, which Plankton was reluctant with joining SpongeBob's side pronouncing "teammate" as "tee-am-mate". SpongeBob tries to get Plankton to understand the meaning of teamwork, which Plankton barely understands. After trying to find the secret formula in SpongeBob's brain that's literally full of kindness and sweetness, Plankton and SpongeBob decide to time travel to get back the secret formula. So they sneak into the Chum Bucket to rescue Karen who was imprisoned by the savage people, and use her as a power source for a time machine made out of parts from an abandoned taco restaurant, then they go to the future where they meet Bubbles who has a job to look after the cosmos.

Then when SpongeBob and Plankton mistakenly made Jupiter and Saturn crash into each other, Bubbles finds out and starts shooting at them because what they've done could make him lose his job. SpongeBob and Plankton escape and try to go to the past where they see Bikini Bottom a few days in the future in a desert like state where a bearded future Patrick told them that everyone given up on finding the Krabby Patty secret formula. Then while they go right to the past day when the secret formula disappeared, Plankton distracts their past selves as SpongeBob takes back the secret formula.

On the way back to the present, Plankton started to get used to teaming up with SpongeBob. However, when they got home and showed the formula to everyone which turned out to be a fake one that Past Plankton was replacing the formula with with an "in your face" note for Mr. Krabs. This angers the savage people even more, as Plankton angrily accuses SpongeBob for making that foolish mistake of taking the wrong formula.

An upset SpongeBob argued that they're supposed to be teammates, and that it's selfish to take something like secret formula to yourself. After the town threatened to sacrifice SpongeBob since Sandy believed it could be a gift to the "burger gods", SpongeBob then tells everyone that he smelled a familiar scent coming from far away, and when they finally smelled it also, SpongeBob gets Patrick, Squidward, Sandy, and Mr. Krabs right up the where the scent is coming from. Plankton secretly joins in hiding in SpongeBob's sock.

Bubbles returns and thanks SpongeBob for having him be free from his job and offers SpongeBob and his friends the ability to survive above the surface, and launches them up to the beach. As they face Burger-Beard, who's the culprit of stealing the secret formula to open up his new restaurant, he uses the magic book to banish them to Pelican Island to be devoured by the pelicans there. While there, SpongeBob was fortunate enough to find a page from the magic book and uses a pelican feather and Squidward's ink to write them back to fight Burger-Beard as superhero counterparts (SpongeBob as the Invincibubble, Patrick as Mr. Super-Awesomeness, Squidward as Sour-Note, Mr. Krabs as Sir Pinch-a-Lot, and Sandy as the Rodent). Little did they know Plankton sneaks in to write something as well in.

While fighting against Burger-Beard, Plankton, as the giant muscular Plank-Ton, surprising comes to rescue SpongeBob and friends and defeat Burger-Beard, revealing that he also wrote for himself to become a superhero and to rescue SpongeBob from Burger-Beard. Then Plankton knocks Burger-Beard straight to the island above Bikini Bottom. Then as Plankton gets a hold of the secret formula, instead of taking it for himself, he decides to give it back to Mr. Krabs and thanks SpongeBob for teaching him about teamwork, and how selfish it is to keeps things to himself, and offers SpongeBob the remaining page to take them back home and set things back to normal.

Then as the Krusty Krab goes back in business with Krabby Patties returning to Bikini Bottom, Plankton then decides to go back to his role as the business rival of the Krusty Krab back to his formula-stealing schemes just to keep things the way they normally were before. As SpongeBob catches him he uses Gary to scare him away, and then he waves goodbye to him saying, "See you later, 'tee-am-mate'!"

Plankton is evil, intelligent, charismatic, ironic, and funny. He sometimes has a heroic side and he shows up it when he teams up with his former enemies and rivals (though he still continues to steal the formula). However, once young he showed to have been a good friend of Mr. Eugene Krabs. How Plankton changed into such a monster he is mainly shown is so far kind of indefinite. 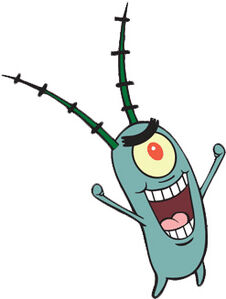 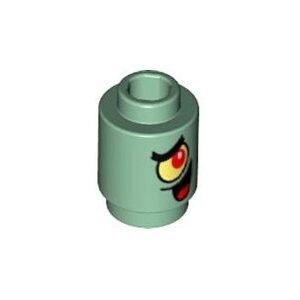 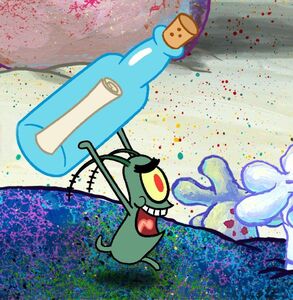 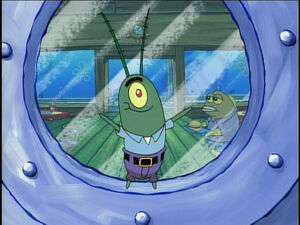 Plankton as Mr. Plankton when he switched lives with Mr. Krabs. 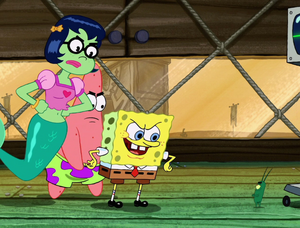 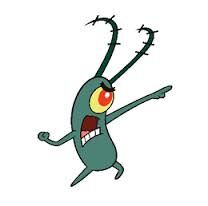 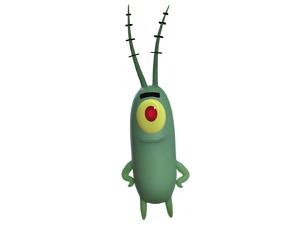 Plankton in Sponge Out of Water. 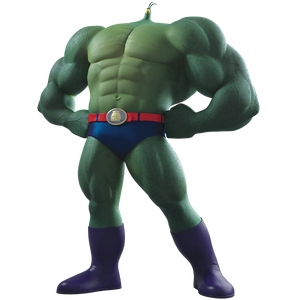 Plankton as Plank-Ton in The SpongeBob Movie: Sponge Out of Water. 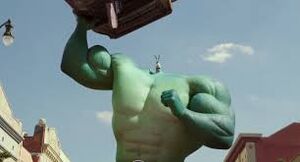 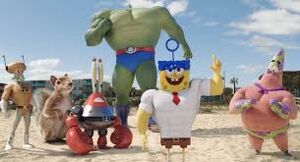 Plank-Ton alongside SpongeBob and the rest of his superhero team. 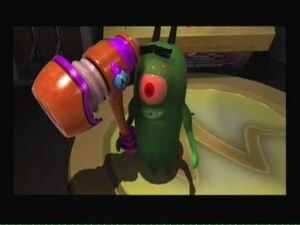 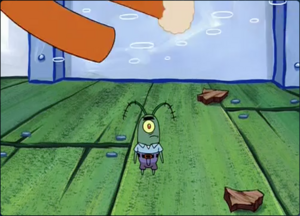