Sheogorath is a recurring character in the Elder Scrolls series known for his insanity, cunning and power. Sheogorath is one of the Daedric Princes, demons with rule over their own realms of reality, of such age and power that they are thought to be on par with the Divines (gods) and most are worshiped as gods by mortals.

Sheogorath is considered the god of the arts and the reason why with inspiration most artists also become somewhat unhinged from reality. But in addition to his status as patron god of the arts, Sheogorath is also god of madness and is very quick to remind anyone who denies creativity of what he is really capable of. As a result of his short temper and ever fleeting whims, his shrines are almost never outlawed or desecrated by concerned authorities in the mortal world of Nirn for fear such acts would earn them the Mad God's wrath.

It is implied that after Oblivion, Sheogorath is the Hero of Kvatch.

Oblivion is a primordial void that exists around Nirn and is the birth-and-rebirth-place of Daedra. Each Daedric Prince rules over a section of Oblivion they have carved out as their own realm and renovated to represent their individual tastes and sphere of influence. Sheogorath rules over his section of Oblivion called The Shivering Isles, frequently refereed to as The Mad House. The realm of the Shivering Isles is split into two sections, the northern region is called Mania and the southern region is called Dementia. Though there is no line or wall separating Mania from Dementia the differences are so stark there is no mistaking one for the other and one becomes instantly aware once the boarder has been crossed, Mania is a land of multiple-colored flowers, a bright kaleidoscope sky and ever happy yet tragically delusional residents, Dementia is region with a multi-colored yet dark overcast sky, swampy terrain, giant twisted eldritch creatures and suicidally depressed and paranoid residents.

At the eastern most point of the Shivering Isles lays the capital city, New Sheoth. Like the rest of the Isles, New Sheoth is divided into a Mania side and a Dementia side, the palace at the top of New Sheoth's citadel is split the same as the city and the isles, with the North wing containing bright colors and ever happy delusional residents and the south wing being drab and grim containing paranoid and homicidal residents. The Mania side of New Sheoth is patrolled by the Aurials or "Golden Saints" as they are currently called. Dementia is patrolled by the Mazken or "Dark Seducers", as they are currently titled. Both the Aurial and Mazken used to belong to other Daedric Princes, the Aurial to the Daedric Prince of spirit and holy energies, Meridia and the Mazken to Daedric Princes of domination and damnation, Molag-Bal, however, both were won in bets Sheogorath made their respective Princes and re-purposed by Sheogorath as his personal enforcers. In order to keep the masses relatively under control without too much effort on his part, Sheogorath appointed the Golden Saints to enforce rules against theft and murder in Mania while the Dark Seducers enforce such rules in Dementia. If caught by the Golden Saints or Dark Seducers a resident will be offered either the chance be sent to a distant dungeon until such time as they can break-out or die trying or be killed on the spot if they would rather avoid arrest. At the very center of the palace of New Sheoth, where the two regions meet exactly, sits Sheogorath, himself split down the middle between creative delusion and playful homicide. Though most residents on one side of the line despise the folks on the other right up to the castle residents and even town guards, absolutely no one dares act out against each-other for fear of provoking Sheogorath to step in and solve the dispute, as even among the insane Sheogorath is feared for his insanity.

In the game Elder Scrolls IV: Oblivion, in the expansion, The Shivering Isles, Sheogorath contacts the Hero of Kvatch to be his champion. Once accepting the task the Hero of Kvatch embarks on a quest to save the Shivering Isles from a fearsome event called the Greymarch, which would bring order and death to the Shivering Isles. As the lord of the Shivering Isles Sheogorath is heavily concerned about his realm's survival and the lives of his citizens. Though all powerful, once the Greymarch starts Sheogorath explains he can not interfere directly himself and will just be left to pick-up the pieces once it ends. Since the Greymarch happens once an era at the end of every era, he has been through it many times and tried a multitude of plans to stop it from occurring. At the end of the third era, Sheogorath decided to get a champion to represent his will while the Greymarch occurred that time to stop it in it's tracks. Despite his seemingly care-free and mad persona, Sheogorath not only deeply cares for his people, but also is a master manipulator of epic proportions, setting a master plan into motion to stop the Greymarch once and for all. 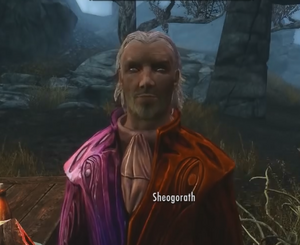 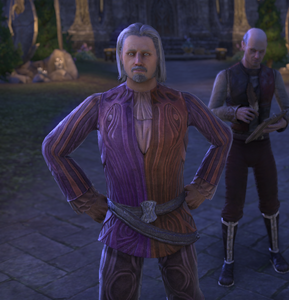 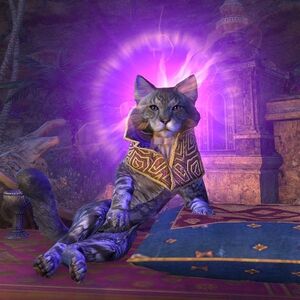