Old Stripes
Lord of the Jungle
Khanny
Stripes
Your Highness

Feline Hero
Shere Khan is the anti-hero of the 1996-1998 series Jungle Cubs. He is the younger version of the main antagonist of the 1967 Disney film The Jungle Book.

He was voiced by Jason Marsden who also voices Kovu, Max Goof, and Danger Duck from Loonatics Unleashed.

Shere Khan appeared as a young cub in the animated series Jungle Cubs. In the series, it was shown that Shere Khan was originally friends with Baloo, Bagheera, Hathi and others. Shere Khan was more of a bully and cocky in the series rather than a dangerous predator. Khan often tagged along with Baloo and friends on many adventures usually trying to prove he's braver than they are. In the series, Shere Khan is voiced by Jason Marsden who gives Khan an American accent, whilst his as an adult, Khan speaks with a British accent.

In spite of being a cub, Khan still holds his intimidating demeanor and continues to strike fear into the hearts of many of the jungle's inhabitants. However, his cocky attitude can get him and his friends into trouble with foes even he's frightened by. Khan prefers to refer to the others as his followers rather than his friends even though he obviously enjoyed spending time with them. Much like an adult, Khan was sometimes found with Kaa often. In one episode, the duo teamed up to take advantage of Louie, after he accidentally injured them. Acting as if they were too injured to do anything themselves, they spent the day bossing the ape around. 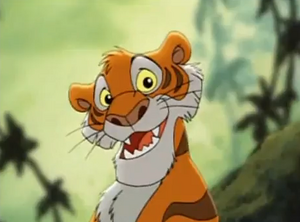 Shere Khan with Bagheera and Kaa

Shere Khan with his grandmother

Shere Khan with Louie
Add a photo to this gallery

Retrieved from "https://hero.fandom.com/wiki/Shere_Khan_(Jungle_Cubs)?oldid=2040126"
Community content is available under CC-BY-SA unless otherwise noted.