Sheriff is a supporting character from the Cars franchise by Disney and Pixar.

He is a police car of Radiator Springs in the movies.

He is voiced by novelist Michael Wallis.

There's a long history of law enforcement in Sheriff's family. His father was a traffic cop. His aunt, 2 cousins on his mother's side and his little brother...even his grandfather was a traffic cop who directed traffic at Times Square in New York around the turn of the century. Sheriff always knew he too would be a cop. After all, how many other options did he have with a name like Sheriff?

In Tokyo Mater, Sheriff stop into Flo's gas stop until he gives a chase on the Road Hazard Delinquents when they are driving recklessly.

Sheriff is the local law enforcement and the keeper of the peace in Radiator Springs. He takes his job very seriously. Sheriff enjoys telling stories and taking the occasional nap behind the Radiator Springs billboard. That's where he was when Lightning McQueen first zoomed into town years ago, which led to a messy car chase that didn't end well. These days, Sheriff welcomes the hotshot racer Lightning home to Radiator Springs with all four tires.

In the film, he watches McQueen leave for the World Grand Prix. When he is called to London by McQueen he aids McQueen and Mater in fighting the Lemons by chaining one of them up just like he did to McQueen in the first film.

Sheriff: MATER! What did I tell you about talkin' to the accused?! Mater: To not to.

Sheriff in the courtroom.

"May Doc have mercy on your soul."

"Boy we ain't as dumb as you think we are.

Sheriff happy to see McQueen is still in town.

Everyone sadly watches McQueen being taken by the press 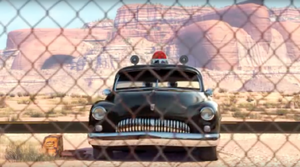 Sheriff and his friends angry over Francesco Bernoulli's insults towards McQueen.

Sheriff cheering when McQueen decides to participate in the World Grand Prix.

Sheriff waving good-bye to Team McQueen as they fly off to participate in the first race of the World Grand Prix in Japan.

Sheriff watching the remaining Lemons retreat, only to get arrested by the British Military.