Defeats all the Bandits

Protector
The Sheriff is the titular protagonist of the 1979 Nintendo arcade game of the same name, he is the most oldest Nintendo character.

The Sherrif will have to defeat the bandits who have him surrounded, he can shoot in 8 directions.

In WarioWare. Inc, the Sheriff appears in one of the 9-Volt's minigames, also had a minigame of the same name, but the only difference is in the face of sheriff's face is the Wario's face.

The Sheriff appears as an collectible trophy along with the bandits.

The Sheriff appears as an assist trophy in both versions, his moves are the same of the arcade game, he also appears as a trophy.

The Sheriff appears again as a assist trophy again, he also appears has a support legend spirit that increase the damange to defeat an assist tropies. His spirit can be summoned by using cores from Wild Gunman, Ganster, Lady & Policeman, any neutral core and any two support cores. In World of Light, the Sherrif can be found in a treasure chest. 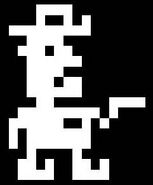