He was voiced by the late Walter Tetley in Peabody's Improbable History and Max Charles in the 2014 film and The Mr. Peabody & Sherman Show, who also played a young Peter Parker in The Amazing Spider-Man films, Spin in Lab Rats, Harvey Beaks in the series of the same name, and Kion in The Lion Guard.

Sherman was found by Mr. Peabody in an alley where a group of bullies were beating him up. After Peabody scared them away, Sherman introduced himself to him. Peabody took him back to his orphanage, but when he saw that its owner was cruel, he decided to adopt him himself.

After being adopted by Peabody, Sherman began living with him in his luxury rooftop apartment in New York City. However, he told Sherman that he is now his owner rather than his father, and told him to address him as "Mr. Peabody".

Realizing that raising a boy in an apartment wasn't easy, since they need room to run around, Peabody built a time machine called the WABAC as a birthday gift for Sherman. He and Peapody then use it to go to the past, where they see a Roman speaking in Latin; Peabody then installs a translation device on the WABAC, allowing him and Sherman to hear foreign languages as English. They then see the Roman again and discover that he is a used chariot salesman. Afterwards, they use the WABAC to go watch as Benjamin Franklin flies his kite, but find out that they are unable to interact with the past in any way. This prompts Peabody to modify the WABAC and turn it from a time machine into a "should have been machine", but this causes the past they visit to become completely messed up, and it's now up to them to save the timeline and rewrite the course of history.

In the film, Mr. Peabody finds Sherman fidgeting in a box when he was a infant in an alley and later adopts him. Since then, Sherman has been raised under the firm yet surprisingly loving paw of Modern Peabody as his son.

On Sherman's first day of school, he is overly excited to go to a normal school for the very first time, as he had been homeschooled by Mr. Peabody previously. As a gift, Peabody gives Sherman a special dog whistle. When Sherman answers a question on George Washington better than another student, Penny Peterson (a spoiled, rich girl), she grows to despise Sherman for being smarter than her. At lunch, Penny humiliates Sherman and calls him a dog. Sherman gets so furious that he beats Penny and bites her arm. After that, Sherman is suspended from school and is threatened to be taken away from Peabody. The next night, Peabody invites Penny and her parents to dinner to make amends. Sherman and Penny try to ignore each other that night but Peabody intervenes. Sherman tells Penny about the WABAC, a time machine built by Peabody, and takes her for a joyride to ancient Egypt. When Sherman comes back, he tells Peabody everything that has happened and they decide to go save Penny and get her back before Penny's parents notice. When Sherman and Peabody get to ancient Egypt, they find out that Penny is gonna marry King Tut (intending to get his money and riches). When Penny finds out she will be killed after King Tut dies, she decides to go home but Peabody and Sherman are thrown into a temple. While Peabody is looking for a way to escape, Sherman claims that Tut and Penny belong together out of jealousy. It becomes obvious that Sherman has fallen in love with Penny. When Sherman activates the booby traps, Peabody and Sherman go into different life boats. Sherman goes into the boat that will get him killed, but Peabody saves him. They escape the temple and rescue Penny from King Tut and Ay's wrath. On the way home, they run out of fuel, so they visit Leonardo Da'Vinci and he helps Peabody fix the machine's power. Sherman tries helping, but ends up hitting Peabody accidentally. Sherman decides to go play with Penny. They arrive in Da'Vinci's attic and take his flying machine for a joyride. Peabody becomes mad and he and Sherman start to argue on the way home. During the Trojan War, he is saved by his dad and they go rescue Penny. When they enter the wooden horse, Mr. Peabody tries to save them but when he did, he died in the Trojan Horse. Sherman and Penny use the WABAC to travel back to the dinner party. Little did they know, their past selves are there. Later on, Ms. Grunion arrives and when she sees everything, she first tries to take both Shermans away but fails when they touch and merge with each other, causing an imbalance in the space-time continuum. Then, she takes the original Sherman away and Mr. Peabody bites Mrs. Grunion. Outside at central park, when Ms. Grunion tries to have Peabody taken to a dog pound, Sherman saves his dad's life by saying "I'm a dog too" and the historical figures around (who are there because of the imbalance in the space-time continuum), say it too. Then, he and his dad save the universe by using the WABAC to go to the future and undo all the damage. Although it initially appears that they are lost, they then return to the present.

Sherman then returns to school, where he is greeted by Penny, with whom he has now become friends.

In this sequel series to the 2014 movie, he and Peabody host a late night talk show which features various historical figures as guest characters. Here, he is portrayed as being much more stupid, comical and hot-blooded than in Peabody's Improbable History and the movie, often being the cause of his and Peabody's mishaps.

Peabody also hosts a segment on the show called "Time Travel", where he recounts stories about his and Sherman's time travel adventures. 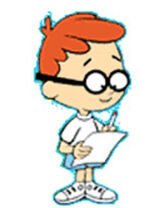 Sherman Screams Comically when he sees his future self

Add a photo to this gallery
Retrieved from "https://hero.fandom.com/wiki/Sherman_(Mr._Peabody_and_Sherman)?oldid=1844151"
Community content is available under CC-BY-SA unless otherwise noted.