Sheva Alomar is the deuteragonist of the 2009 video game Resident Evil 5. She was an agent for the Bioterrorism Security Assessment Alliance, operating as part of its West African branch. She was assigned to the current mission to assist Chris Redfield, who was unfamiliar with the area. A versatile fighter with extensive experience, her ability to use firearms is on par with Chris. She is much smaller and more flexible than Chris, enabling her to perform certain manoeuvres that Chris cannot. In turn, this allows Chris to throw her up to high ledges, or over large gaps in order to reach areas or objectives that a lone operative couldn't reach.

She is assigned to work alongside Chris throughout Kijuju to keep the natives from becoming hostile over the fact that he's an American. The two are sent to locate a weapons dealer named Ricardo Irving, but encounter the Majini and other dangers along the way. She is a member of the West African branch of the Bioterrorism Security Assessment Alliance (BSAA) and is left-handed.

Sheva appears to be modeling wavy brown hair pulled back into a ponytail. She wears two necklaces, one to be a choker and the other to perhaps represent Africa. On each arm she appears to be wearing a band (possibly a sweat band), black fingerless gloves, and brown arm accessories. Next is a lavender shirt with a native looking design. For bottoms, she wears skin-tight beige pants which tuck into her boots. For footwear, she wears brown boots similar to Jill's from Resident Evil 3: Nemesis which are about knee-high.

As for arsenal, she has shoulder arsenal (like Jill again), and for bottom arsenal, she has a handgun holster on the left thigh and her ammo on the right thigh, along with a utility belt around her waist.

There are four costumes that can be unlocked for Sheva: Clubbin', Tribal, Business and Fairytale.

Tribal is unlocked by obtaining all the 30 BSAA emblems and completing the game once, its theme is an African tribes attire. This costume consists of a leopard print bikini top, a few pieces of cloth which form a skirt, a pair of black high-heeled sandals and tribal accessories. Sheva's body is decorated with white paint.

Business is unlocked by downloading Costume Pack 2 and by completing the main game once, it is also included in the PC version of the game as a bonus, it is unlocked by completing the main game once as well. Its theme is modern office attire and it has a striking resemblance to Ingrid Hunnigan's appearance. This costume consists of a gray suit with a short skirt and a white blouse underneath, a pair of black high-heels as well as various equipment. Sheva's sporting a pair of eyeglasses and her skin is lighter while wearing this costume.

Fairytale is unlocked by downloading Costume Pack 1 and completing the main game once, its theme is Red Riding Hood. This costume consists of a red hood revealing Sheva's bra, a matching red skirt, a brown corset, an apron, a pair of knee-high black boots and black stockings. Sheva's skin and eyes are lighter while wearing this costume.

Sheva is shown to be extremely loyal to her fellow BSAA comrades. When Chris was planning on continuing the mission in Africa, Sheva tried to talk him out of it out of concern for his safety. However, after hearing that Chris was in Africa to not only complete the mission, but also because his old partner, Jill Valentine, who was thought to be dead is still alive and somewhere in Africa, Sheva resolved to continue the mission with Chris. Another instance about this loyalty is when Chris went missing in Edonia, she sent a message of concern to Piers Nivan to ask if she can be any help.

Born in 1986, not much is known about Sheva Alomar's early life. When she was eight, her parents died in a mysterious accident at the factory where they worked, and Sheva was forced to live with her uncle. Due to the fact that her uncles as caring for seven other children, Sheva ran away and ended up living with a truck driver who had mercy on her.

The truck driver was actually part of a anti-government guerrilla group, which Sheva later joined. It was during her time with the guerrilla group that she learned about her parents' true fate. Their village, specifically their factory, was the site of a bio-organic weapon test enacted by the Umbrella Corporation, and her parents were killed in the resulting destruction.

Several years later, Sheva was contacted by an American operative searching for candidates to help stop the Umbrella Corporation from selling bio-organic weapons. After bringing the Umbrella Corporation's agent to justice, Sheva moved to America to begin life anew. She managed to learn English and join a university fairly quickly, graduating within a couple of years. The American operative suggested that she join the Bioterrorism Security Assessment Alliance (BSAA). Within a few years, she was chosen as Chris Redfield's next partner.

During the events of Kijuju Autonomous Zone, Sheva is Chris Redfield's partner, replacing Jill Valentine. She is specifically assigned to Chris to help keep the natives from growing restless in the presence of a foreigner.

Sheva is always present as a partner throughout Resident Evil 5. She is either computer controlled or human controlled, helping Chris through obstacles and fights, as well as assisting him in terms of weapon and item allocation. The player is able to manually heal Sheva, give her items, and give her ammunition.
Chris and Sheva's relationship during Resident Evil 5 is initially shaky, due to the fantastic relationship Chris had with Jill. However, as events progress, Chris comes to trust Sheva more, and the duo eventually face off against Wesker himself in the final confrontation, simultaneously firing two RPG-7s to kill him off.

In 2012, when Chris went missing after the mission in Edonia, she messaged Piers Nivans on her sadness of his disappearance, and stated she wanted to help. 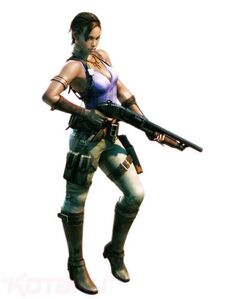 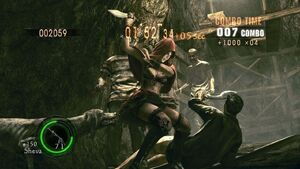 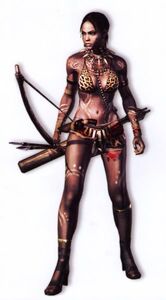 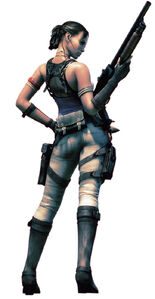 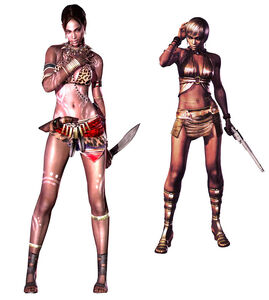 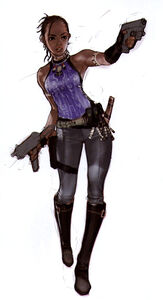 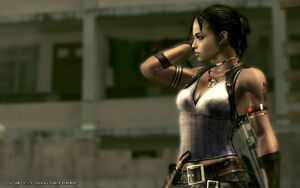 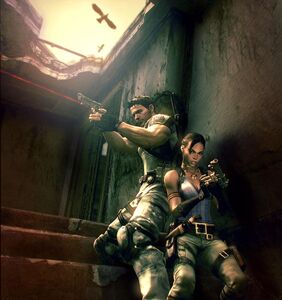 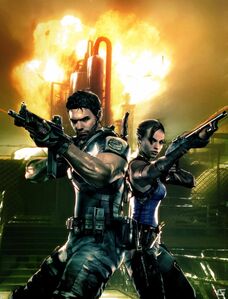 Retrieved from "https://hero.fandom.com/wiki/Sheva_Alomar?oldid=2324442"
Community content is available under CC-BY-SA unless otherwise noted.