End of the Century Emperor

Shiage Hamazura is one of the main protagonists of the light novel and anime series A Certain Magical Index. He is a level 0 and former Skill-Out member, (with his friends Ritoku Komaba and Hanzou Hattori) until his defeat at the hands of Touma Kamijou. As former lacky, grunt, chauffeur, and informant of ITEM, he delved into Academy City's darkness and turned into an anomaly that disrupts Aleister Crowley's plans and calculations time and time again.

Shiage looks like an ordinary teenager with unruly blonde hair. Shiage previously sported a nose piercing a month before his proper introduction but it was violently removed after Touma hits him in the nose with a stolen bullet-proof riot shield.

Shiage can be considered a balance between Touma and Accelerator. Like most members of his Skill-Out gang, he is lawful; however, while he and Touma share some of the same traits, such as their reputations as delinquents, their victories over higher-ranked espers through tactics, and their interference with Aleister Crowley's plans, he isn't as idealistic or as nice as Touma, at least not at first. In battle, he prefers to avoid fighting if possible or to finish the fight as quickly as possible, which is somewhat like Accelerator's personality. Also he shows an inferiority complex that makes him think he can't do anything right or complete. The main reason behind this is that he had been always branded as a powerless person (level 0) and unlike Touma, he has yet to display any manifestation of an esper ability. Therefore, due to his lack of power and mockery by other higher level espers, he joined a Skill-Out gang. This complex can be seen in his usual internal monologue, as he always complains about the situation but he never says it out loud.

He falls in love with Rikou Takitsubo, and because of this, he decides to fight the 4th-ranked Level 5 esper, Shizuri Mugino, also known as Meltdowner, in order to protect Rikou.

As far the plots advances, he began to show a nicer side similar to Touma, as seen when he aids Russian villagers during pirate attacks, convinces Acqua to not give up on life, and how his reluctant fight with Mugino leads him to forgive her and express his desire to get back everyone together as ITEM again.

Shiage is suggestive to anything sex-related, as shown when he got a nosebleed simply by seeing Saiai Kinuhata putting a stuffed bunny doll behind Rikou to give her a bunny girl look (even though his perversion is usually used as comic relief).

Hamazura Shiage is a true level 0 with no esper abilites. As a result, if he wants to survive, he must think ahead and rely on other weaponry. 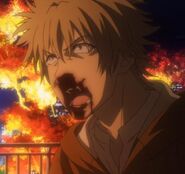 Shiage with the members of ITEM

Shiage vs. Mugino
Community content is available under CC-BY-SA unless otherwise noted.
Advertisement