Adventuring across the land.

Noble Knight
Shield Knight is a major protagonist of the indie-game Shovel Knight. She is a noble knight and Shovel Knight's trusted partner.

Shield Knight and Shovel Knight were a pair of legendary adventurers that journeyed across the land to fight evil and discover fortune. They eventually learnt of a cursed amulet within the Tower of Fate and sought to dispose of it before anyone could claim it's dark power. Shield Knight ventured ahead of Shovel Knight as they searched the tower and soon discovered two men attempting to take the amulet's power for themselves. Although she warned them of the devastation their actions could potentially unleash, the one named Donovan refused to back down and the two engaged in battle. Their fight resulted in a cave-in which severely weakened Shield Knight and caused her to be overwhelmed by the cursed amulet's power, transforming her into a evil sorceress called The Enchantress.

Meanwhile, Shovel Knight was vacated from the Tower of Fate as it was sealed off to the outside world. The Enchantress then formed The Order of No Quarter to spread her influence across the land while Shovel Knight, devastated by to loss of his comrade, retired from adventuring until the day he could enter the Tower of Fate again to rescue her. Shield Knight was eventually saved by Shovel Knight after he defeated The Enchantress in combat. However, this unleashed an incarnation of the fallen sorceress called The Remnant of Fate which proceeded to attack them both.

Shield Knight assisted her partner in eliminating this last foe before the blue-clad knight was knocked unconscious and the Tower of Fate began to collapse around them. She shielded against the remnant's final attack as Black Knight appeared to aid her and instructed him to get Shovel Knight to safety while she covered their escape. Luckily, Shield Knight survived the tower's destruction and lied next to Shovel Knight upon finding him at a campsite.

Shield Knight appears in Super Smash Bros. Ultimate as a advanced support spirit that increases the user's resistance on weapons. Her spirit can be obtained by purchasing on Anna's Emporium for 1000SP. 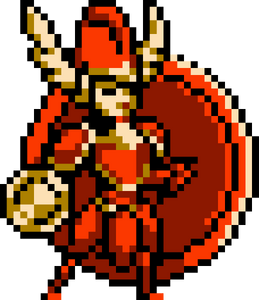 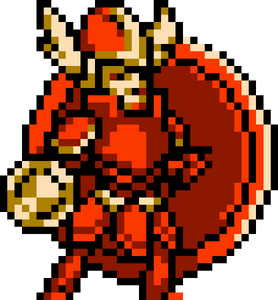 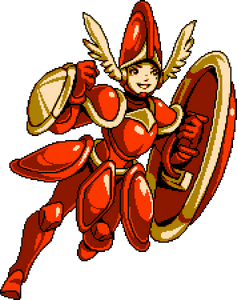 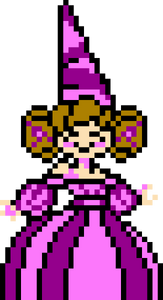 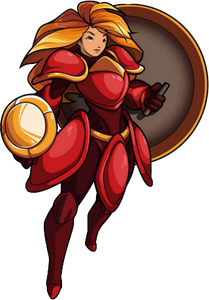 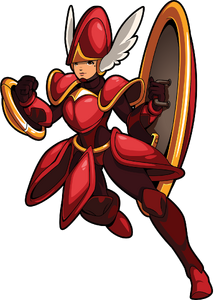 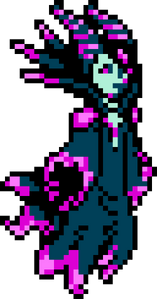 Shield Knight possessed by The Enchantress.