Master of the Jade Palace

He is voiced by Dustin Hoffman in the feature films and in the cartoon series, Kung-Fu Panda: Legends Of Awesomeness, by Fred Tatasciore.

Master Shifu was seen as a loving father and devoted teacher to a young Tai Lung when the cub first showed up. But, after he has to give up Tai Lung, he became distant, a firm and harsh taskmaster, and somewhat insensitive. It wasn't until Po saved his life and brought the old master peace that he began to let go of the past and open up to his students one more time.

Shifu was seen in a training session with the Furious Five until Master Oogway summoned Shifu in the first place. Oogway told him he had a vision of Tai Lung returning to the Valley of Peace. In alarm, Shifu sent a messenger goose by the name of Zeng to Commander Vachir, with a letter ordering double security in hopes of preventing the vision from coming true. Master Oogway announced that it was the time to choose the Dragon Warrior now, and advised Shifu to prepare his students for the tournament that would take place for the purpose. Acting as the announcer on the day of the tournament, Shifu introduced each member of the Furious Five to the crowds that gathered to view the event, unmindful that the time of the choosing would be interjected by the presence of an obese panda named Po, a noodle maker's son who accidentally shut out of the tournament and was looking for any means to get inside the arena to watch. When Po crashed the ceremony by landing in front of Oogway, just as the tortoise raised his hand to point out the Dragon Warrior, Shifu was outraged.

He believed that Oogway was about to point to Master Tigress, and felt infuriated that a "flabby panda" who appeared seemingly by accident was chosen over his own foster daughter (Who he secretly hoped would be the Dragon Warrior). He was determined that he would prove that Po wasn't the true Dragon Warrior by testing him; if the panda bowed under the stress and left by the next morning, it would only prove it. However, Po proved to be enthusiastic and determined, even under Shifu's sharp verbal barbs and his constant amateurish behavior, only serving to make Shifu become even more harsh in the hope that he would discourage Po from staying. It was two days into the test, and the upset Shifu desperately meditated for inner peace. He was disturbed by Zeng soon enough, who just arrived back from Chorh-Gom Prison with ominous news: Tai Lung escaped and came back, just as Oogway foresaw. Agitated, Shifu sought out Master Oogway under the Peach Tree of Heavenly Wisdom, relaying the bad news. Oogway accepted the news calmly, saying that he had faith in Po as the Dragon Warrior and silently admonished Shifu, telling him to be patient and nurture the panda instead of offering harshness.

Then he stated that his time would have come, and that Shifu would have to continue his journey without him. Oogway disappeared in a shower of peach petals and light as he passed on, leaving Shifu with his beloved peach-wood staff and a mountain of a problem to deal with. Realizing Po was really their only hope in defeating Tai Lung, he went back to the barracks (noticing Po disrespectfully making fun of him and the Five laughing in a disrespectful manner) and announced the news of Tai Lung's escape and Master Oogway's demise to the Furious Five and Po. The news instantly set them in an uproar, making Tigress and the other Five leave the palace to try and stop Tai Lung on their own while Shifu attempted to stop a panicking Po from departing. This led to an argument with Po, who reminded Shifu that he was trying to get rid of him since he showed up. Shifu admitted this, but pointed out that Po would have chosen to stay despite this. However, in doing so, Shifu learned that Po had a more profound handicap: He was burdened with a deep self-loathing and considered himself a fat failure. Faced with a student so physically and spiritually burdened, Shifu began to share Po's doubts that he could train him into the Dragon Warrior soon enough.

The next morning, Master Shifu came back from his vigil under the barren peach tree, only to discover that Po hadn't left after all and tore apart the kitchen and eating everything in sight in his agitation — and performing some tricks that should have been beyond the panda's abilities as he tried to reach food that was hidden or out of reach. Realizing that the key to teaching Po was through proper motivation (food), he proceeded to take Po to the Wu Dan Mountains and lifted the giant panda's spirits by simply asserting he had faith in him for the attempt. With that accomplished, Shifu began training Po in the art of Kung Fu in an entirely new way, climaxing in a fight of "keep-away" with a dumpling. When Po eventually bested Shifu at the game, and demonstrated his emotional growth by declining to eat it as a sign of his overcoming his psychological dependence on food, he knew that Po was ready to receive the Dragon Scroll and revive the unlimited power that came with it.

Upon returning to the Jade Palace, Shifu and Po were terrified to find that the Furious Five would have been badly beaten by Tai Lung, and were all paralyzed except for Master Crane, who was left to carry them back home as a warning. After reversing the nerve strike effects on his students, Master Shifu reassured them all that even though Tai Lung would have gotten stronger, the Dragon Warrior (Po) would beat him by attaining the power from the Dragon Scroll. However, upon opening the scroll, it was revealed that it was blank. With nothing else left to do, Shifu told Po and the Furious Five to evacuate the Valley. He would stay behind and hold off Tai Lung long enough to make sure everyone would be safe, even though he knew that the price would cost him his own life. Preparing himself, he awaited Tai Lung's arrival, and when the leopard showed up, the two of them engaged in violent combat.

The fight was evenly matched for a while, until Tai Lung renewed his vicious attacks on the aging master, screaming accusations and tortures before demanding to be told of how proud Shifu was of him. Badly wounded and defeated, Shifu knew that this was his one last chance at making amends with his former son and student, and apologized; telling him he was proud of him indeed, and that Shifu's pride would have blinded him to what Tai Lung was becoming. After a moment of clear indecision, Tai Lung hardened his heart and grasped his master by the throat tightly, proclaiming that he wasn't after an apology — he still wanted the scroll. Upon seeing the scroll missing, the snow leopard nearly strangled Shifu before the timely arrival of Po rescued him.

Resting all during the ensuing battle that resulted in Po utilizing the legendary Wuxi Finger Hold on Tai Lung, Shifu was mistaken by Po to pass on, but he merely found peace after confronting his greatest mistakes. In the aftermath of the great battle, Shifu has found it in himself to let go of his bitterness, and is slowly but surely opening himself back up to his students while continuing Po's training.

At the beginning of the film, Master Shifu summoned Po to the Dragon Grotto, where he was seen meditating. Once Po had arrived, Shifu started their lesson off by demonstrating one of Master Oogway's final teachings about Inner Peace. By using slow Tai chi movements, Shifu took a small water drop that dripped from one of the cave's stalactites and carefully moved it onto the leaf of a nearby plant without breaking the droplet. Po was amazed by this technique, and Shifu stated how inner peace allowed one to do the seemingly-impossible. He continued by explaining how inner peace could be achieved through various ways. He shared with Po that he had learned it through pain and suffering, which he said he endured from the events with Tai Lung and Oogway's selection of Po as the Dragon Warrior, calling it "the worse day of his life." But then he added that he eventually came to realize that it wasn't Po that was the problem, but instead within himself.

When he allowed himself to come to that realization after Po had defeated Tai Lung, he was able to "harness the flow of the universe" and achieve inner peace. Just as he and Po were about to begin practicing the lesson, Tigress arrived with news of the Musician Village being raided by wolves. Shifu allowed Po to go with the Furious Five and protect the village.

After returning the next day, Shifu read to them a message he received from Gongmen City, stating how Master Thundering Rhino had been killed by a weapon that "breathes fire and spits metal". Shifu immediately feared this was the work of Lord Shen, and that he and his weapon must be stopped or it would be the end of Kung Fu. He then told Po to take the Five and travel to Gongmen City to stop Lord Shen and destroy the weapon. But when Po hesitated, asking Shifu how Kung Fu could stop something that stopped Kung Fu, Shifu again reminded him that "anything is possible when you have inner peace." And with that, Po left with the Five.

Later, while meditating in the grotto again, Shifu sensed something was wrong and nearly collapsed just after Po had been blasted back in Gongmen City. Though he wasn't seen doing so, he traveled to the city and convinced Masters Storming Ox and Croc to leave their cell and help Po and the Five fight against Lord Shen and his forces. All three Kung Fu Masters did so, and with their help, Po and the Five were able to fight off a good majority of Shen's forces. But their success convinced Lord Shen to ruthlessly fire one of his cannons at the wreckage of boats the Masters had created, which exploded everything and everyone in front of him. The Masters were all left floating on pieces of the remaining wreckage in the harbor, all hope seemingly lost. Shifu saw Po climb up onto a piece of floating timber and face Shen's fleet, seemingly trying to sacrifice himself to save his friends.

He was then astonished when he saw that Po was instead using the movements of Oogway's teaching of inner peace to catch Shen's cannonfire and redirect it back towards his fleet. After Po defeated Shen, he congratulated Po on finding inner peace "at such a young age", which he added sourly. But Po then told him he had a great teacher. He then attempted to hug Shifu, only for his master to mysteriously reappear behind him. Shifu and the other Masters stayed for the city's celebration and watched as fireworks decorated the golden sky.

He returns in the third film where he tells Po he must master chi. Later while Po is away learning Chi to stop Kai, Shifu becomes one of Kai's Jombies, along with Monkey and Viper. After Po defeats Kai, Shifu and the other kung fu masters were Kai had Jombieifed over the years turned back to normal. 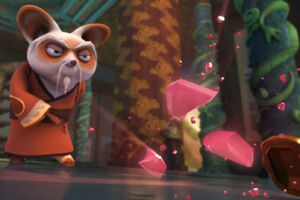 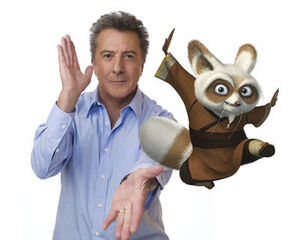 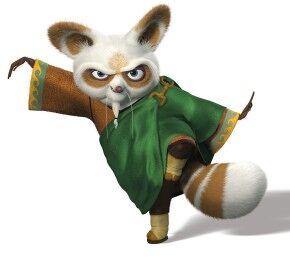 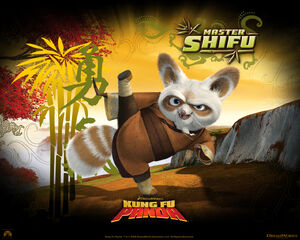 I Said You Are Free to Eat Have a Dumpling?

Shifu with Tai Lung the Cub