Transform from human to animal at will

He is voiced by Jouji Nakata.

Shigaraki wears a dark brown yukata and the garb of a priest. Along with his straw hat, he is often seen carrying jar of alcohol and smoking through a smoking pipe. He owns a shakujō that he sometimes appears with. Shigaraki occasionally dresses as Kohina and his tanuki form was once to be so real (and scary) and later changed the appearance to be more cuter so he'd be more popular with girls.

Shigaraki is very lazy, drinks a lot, and is determined to keep his bothersome lifestyle intact. Despite his bad behavior, he can't stand to see anyone cry, especially girls. Despite these behaviors, Shigaraki is a kind soul who uses his pachinko winnings to fund an orphanage inhabited by the children whose families he ruined financially. He also cares for Kohina deeply and removed a violent spirit she had befriended, receiving a curse (scar) in the process. He's also interested in both Kokkuri-san and Inugami's female form. Shigaraki is one of Kokkuri-san's close friends as they've known each other since way back. It is also mentioned that they both occasionally attend trips held by the Seniors' Club together. 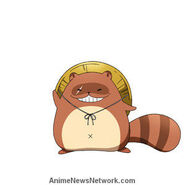 Retrieved from "https://hero.fandom.com/wiki/Shigaraki?oldid=1782190"
Community content is available under CC-BY-SA unless otherwise noted.