Working out
Going to school

To improve himself and become more open and social (succeeded).

Shigeo Kageyama otherwise known as White T-Poison or more famously Mob, is the titular main protagonist of the webcomic, manga, and anime series Mob Psycho 100. He's a powerful esper with vast powers and is the assistant and disciple to Arataka Reigen and is the newest member of the Body Improvement Club.

He was voiced by Setsuo Itō in the Japanese version, and by Kyle McCarley in the English dubbed version.

Mob has dark bowl-shaped hair. He's usually seen wearing the male student uniform of Salt Middle School, the typical gakuran outfit and tends to have a nondescripted expression on his face.

At a young age, Mob learned that his powers were too strong to leave unchecked and would result in other people being harmed. As a result, he has decided to keep his emotions in check to prevent other people from being hurt. He does this to prevent his powers from reaching 100% though, it is revealed that he can control his emotions in his 100% state in some cases. Due to his control of his emotions, this has made him socially awkward and lacks friends. Despite his social awkwardness, Mob is actually and kind and compassionate kid who is also very helpful and forgiving and will help others when he can.

When he was younger, Mob was frightened and scared of his own abilities and was looking for a guiding force to follow. He was able to come across Arataka Reigen who made him his assistant and disciple. Takane Tsubomi, his childhood crush, made Mob think that his psychic abilities don't make him superior and he then vowed to keep them under control.

Mob has the ability to steal and give powers from and to others. 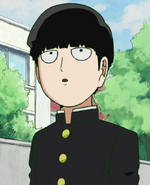 Mob attempted to twist apart Toichiro and suggesting to end themselves.
Add a photo to this gallery
Retrieved from "https://hero.fandom.com/wiki/Shigeo_Kageyama?oldid=2201767"
Community content is available under CC-BY-SA unless otherwise noted.