Shigure (時雨 ”Late Rains”?) was the second of ten Shiratsuyu-class destroyers, and the first to be built for the Imperial Japanese Navy under the Circle One Program (Maru Ichi Keikaku). Along with the destroyer Yukikaze, she developed a reputation within the Imperial Japanese Navy for being "lucky" or "unsinkable", emerging as the sole surviving Japanese warship from numerous battles. Shigure was torpedoed and sunk by USS Blackfin (SS-322) in the Gulf of Siam on 25 January 1945.

Wears a black serafuku shared with the first four ship girls of her class.

One of the girls with a second remodeling. Here, her hair becomes feathered, she gains a hair decoration salvaged from one of the Fusou sisters' own and she wears the same uniform as Yuudachi before her.

Her Christmas portrait for her second remodel gives her a santa hat, Yuudachi's scarf and a sack. Her damage portrait reveals some of the contents of her sack: a Yuudachi-like creature and one of Yuudachi's torpedos.

She is often compared to a Guncannon due to placing her cannons on her back, over her shoulders; much to her chagrin. 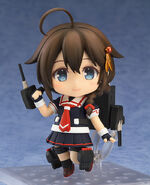 Add a photo to this gallery
Retrieved from "https://hero.fandom.com/wiki/Shigure?oldid=1653309"
Community content is available under CC-BY-SA unless otherwise noted.