The Prodigy of Swords, Mistress of all Weaponry, Witch, The wooden spoon monster (by The Valkyries)

Ninja
Shigure Kōsaka is the supporting characters of History's Strongest Disciple Kenichi. She is a weapons master of the Ryouzanpaku, as well as the youngest master of Ryozanpaku and only female master.

As a child, Shigure's appearance was so boyish that even the immensely perceptive Akisame mistook her for a boy. As an adult, Shigure is a fairly tall and beautiful young woman with a slender frame yet remarkably curvaceous-figure and well-endowed big breasts. She has long waist-length raven hair usually tied back in a high ponytail, peach skin, and light purple eyes. She wears a purple choker around her neck that contains numerous small pins. She normally dresses in a small pink kimono and long purple stockings; underneath she wears bandages over her chest and a fundoshi. When fighting seriously she dons chain mail and wears a black strap under her breast to kept the chain mail in place. Her most eye-catching feature are her eyebrows which resemble lightning bolts. She is almost always seen carrying her father's last and finest ever sword; a tsuba-less nodachi strapped to her back with makeshift grip of bandages wrapped around the hilt.

The most distinctive thing about her, is her zig-zag eyebrows going up and down.

Shigure was raised deep in the mountains along with her father, who was a master at both crafting and wielding weapons. During this time, she met Sai Kagerou, who retrieved Setsunamaru from her father and tested it on a swallow, Shigure's "first friend".

On one of Akisame's travels, he discovered the then-nameless Shigure and her father. Because her father was suffering from a terminal illness, he requested Akisame to take his life away in a duel so that he could die a warrior's death. Akisame initially refused, but eventually had to throw him off a cliff after a forced confrontation. Before dying, her father admitted he did not really want to die in battle, but was trying to be a bad example so his daughter would avoid repeating his mistakes. Shigure, seeing her father's death, quietly sheds a tear whilst clutching the final sword Hachirobe crafted, the only thing to remember her father by. Akisame then gave Shigure her name (her father never gave her one) after seeing the rain and took her to be raised by Akisame's old friend, the late master of the Kōsaka-style weapons combat. After the old man passed away, Akisame brought Shigure into Ryōzanpaku. Shigure goes on missions to locate swords crafted by her father and takes them out of circulation, keeping her exact motivations for this a secret.

Shigure believes that weaponry should be seen as an extension of the body: simply relying on the weapons strength alone will not make you a master of it. She seems to have a great deal of love towards weapons, as at one point during the DofD arc she asks to keep a tank, treating it like a pet and even naming it 'Little Cattaleya'. Likely due to her emphasis on the Katsujinken, most opponents she faces end up losing without significant injury or by simply having their clothes torn (which she often does to Miu, Kenichi, and Freya's Valkyries). She seems to be aimed at women probably due to the fact that more times than not, women will stop fighting and try to cover themselves up.

When initially introduced she appeared to be a loner, often avoiding interaction with the other members of Ryozanpaku (besides occasionally Apachai). At the same time, due to her unique childhood experience with Akisame, she has developed a strong respect and loyalty to him, at times seeing like a surrogate father, as she will follow his requests without question. She will usually retaliate violently to Kensei's perverted antics much like Miu. However, she still has a feminine side, blushing in reaction to Akira Hongō refusal to fight her for being a woman and showing she was grateful for someone considering her as a woman.

Shigure is known to occasionally pause between words when talking. She is usually seen with an emotionless demeanor, rarely ever smiling. She is usually seen smiling when proud of Kenichi's progress. She was even cheering happily when Kenichi imitates her while battling Odin and copying her fighting style like the other masters. Shigure also has a great love of animals. Her best friend is her mouse Tochumaru and will not forgive anyone who hurts him.

Shigure seems to have sleeping issues, as shown by Sakaki that she sleep walks and mutters some words in her sleep that Sakaki states is creepy and somewhat scary, making this the only thing he's afraid of. Shigure's behavior has changed noticeably since Kenichi's arrival, as noted by Miu who once wondered if Shigure sees him as more than her disciple.

She begins opening up to the others, and even joins them for meals. She become's indignant when the other members of the dojo express relief that Kenichi was alright after a training trip with her, though this could be due to her taking their relief as insult to her mastery. Shigure even allows Kōetsuji to tell Kenichi of her past and is quite candid around him.

She would even bathe right next to him, unconcerned with him seeing her nude and even suggests that they bathe together again. Out of all the masters, Shigure trains Kenichi the least, yet it is implied she yearns to train him, and is disappointed with Kenichi's reluctance (and fear) to use weaponry but often tries to convince him to train more. When she finds the ability to give Kenichi words of advice during her task to revive Kenichi as a martial artist, she pumps her fist triumphantly for succeeding as a teacher to Kenichi.

There's a running gag that Shigure has shown to have no modesty in the slightest causing others to be uncomfortable (or pleased) and that usually ends for trouble for others. Such as when Kenichi went to wake her up from a mission she had, she barely had anything on and caused him to gain a nosebleed. She even wanted to bathe with Kenichi, showing no discomfort at all and even fought several opponents naked and not even embarrassed by it. When she fishes for food on her own, she is naked and not uncomfortable at all. She is even fine with undressing in front of others such as Kenichi despite his protests (and Miu covering his eyes). 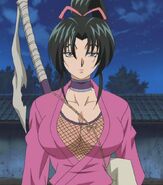 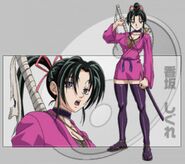 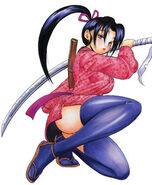 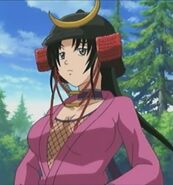 Add a photo to this gallery
Retrieved from "https://hero.fandom.com/wiki/Shigure_K%C5%8Dsaka?oldid=2006761"
Community content is available under CC-BY-SA unless otherwise noted.