Have her name get written in the Love Phone.
Transform Guri into a demon (succeded)
Become a demon
Keeping her promise to Guri

On & Off Antagonist Heroine

Shikimi Shiramine is one of the main characters in the manga and anime series Love Tyrant, or The Very Lovely Tyrant of Love. Despite being the main antagonist of the series, in later chapters she is shown some anti-heroic actions and keeping her promise to Guri.

Shikimi is the cousin of Akane Hiyama and Yuzu Kichougasaki. Throughout their early childhoods, Shikimi had terrorized them greatly; in one instance, Shikimi stole Yuzu's porcelain doll, claimed she would return it to her only to then throw it into a piranha-infested pond. Years later, through means unknown, Shikimi realized that Akane and Yuzu were immortal now thanks to the Kiss Note, a powerful notebook which causes anyone whose name is written in it to instantly fall in love within twenty-four hours. Seeing as how Seiji Aino, the main protagonist of the series, was hooked up in this harem, Shikimi makes it her goal to be included.

Shikimi's defining trait is her sadism. Shikimi loves inflicting pain and misery on others around her. Shikimi views everyone around her as a plaything that she could torture to her heart's content. When she was young, she grew envious of the affection that Akane and Yuzu received from their parents, and decided that stealing what belonged to others would satiate her sense of loneliness. Additionally, Shikimi is a skilled manipulator, having manipulated people to meet her ends. She also uses severeal disguises whenever she's in public.

One of Shikimi's greatest pleasures is cold torture. When she lures Seiji to an abandoned warehouse and restrains him, Shikimi doesn't delay with driving small daggers into his hands, coming only short of tearing his eye out because of Akane. Shikimi gets off on the suffering of her victims so much so, even Maou, the ruler of Hell, is disgusted by her. Besides enjoying the pain of others, Shikimi also gets aroused by receiving injuries as evidenced by her becoming ecstatic when Akane cuts her hand with one of her knives.

Despite this, Guri is able to realize that Shikimi may act this way, because she is lonely and craves acknowledgement. However, she went about it the wrong way, thus closing her heart off from feeling genuine love. Shikimi displays confusion upon Guri telling her that since her heart is cold, she couldn't get her name added to the Love Phone. Even with everything she had done to Seiji and the others, Guri was still willing to give her a chance of reforming herself. In summary, Shikimi is very similar to Guri in several ways; both had a slim understanding of what true love meant, but while one comes to genuinely care for her friends, the other resorts to theft and manipulation to make herself feel better about herself.

Shikimi actually makes a short cameo in episode 3. Sometime after the Kiss Note was destroyed, Guri is given a replacement in the form of the Love Phone. She watches down from a tree, clearly intrigued by this device. Shikimi disguises herself as an ordinary student, and manipulates Seiji and Guri into helping her get together with this boy she supposedly liked. However, she claimed that she didn't actually know the name of the boy in question; despite that, Seiji and Guri insist on helping her. Whilst Guri was distracted, Shikimi steals her Love Phone, and asks for her to bring all of her BL books to the meeting. While Seiji accompanied Shikimi to meet her love interest, he began to suspect that there was something sinister about her. Eventually, they come upon an abandoned warehouse. Without warning, Shikimi traps Seiji in webbing, and began to torture him, taking immense pleasure from it. Akane arrives at the warehouse and attempts to fight with her depraved cousin only to be caught alongside Yuzu. Shikimi takes note of how much Akane had grown since the last time she had seen her, but she also states her disappointment that Akane was less strong than she was. She also compliments Yuzu for improving on her skills. Shikimi decides to continue her torture on Seiji. Unfortunately for her, her fun was cut short when Akane expressed sorrow on her face. Angered, Shikimi rants about how she had become an ordinary girl.

Before she could kill Seiji, Guri arrives, albeit wearing a shrimp costume. Shikimi attempts to goad Guri into including her name in the Love Phone. Despite Seiji's fears, Guri declines her request saying that her definition of "love" was artificial whereas Akane's and Yuzu's love was genuine. Feigning understanding, Shikimi tries to use her webbing to attack Guri from behind only to be interrupted by a phone call from Akane's mother. Before she left, Shikimi vowed that she would return.

Shikimi makes good of her promise in episode 6. When Seiji was ordering shaved ice and condensed milk for Guri, he encounters Shikimi again, this time wearing a white wig. Walking alone together, Shikimi "apologizes" to Seiji about her actions in the previous episode and immediately asks if she could resume with what she did yesterday. When Seiji declines her offer, Shikimi tries to offer her body to him as payment. Shikimi finds herself baffled by the fact that Seiji refuses to take advantage of her, claiming that he was boring. Shikimi also fills Seiji in on the two warring families: the Hiyama clan and the Kichougasaki clan, stating that the matriarchs of the clans are on bad terms. She also admits that she acts on behalf of the Hiyama family.

When Suo Hiyama and Ameisha Kichougasaki discover that their daughters were dating Seiji, they appoint Shiramine with keeping an eye on them. As such, she transfers to their school, and siezes a role in the school play. When Seiji proposes that he and Akane kiss each other in public, Shiramine manipulates Yuzu into questioning whether she truly cared for Seiji despite her blatant denial. In her confusion, she kisses a surprised Seiji, but this only further confounds her. While Akane realizes what her sister did, she doesn't threaten her in any way. Shiramine also manipulates Guri into questioning her feelings for Seiji. In episode 10, she makes herself an univited guest in the Aino household, causing Akane to relent using violence on her lest she threaten the relationship. Shiramine is tied up by Akane towards the end of the night, but she and the other girls somehow end up in the room Seiji was sleeping in. At the end, Shikimi notices how Guri seemed forlorn about Seiji's relationship with Akane, and she offers to speak to Guri in private.

In episode 11, Shikimi takes Guri to a cafe so that they could talk. When Guri mentions that she was asked repeatedly if she truly loved Seiji, Shikimi suggests that she stay away from Seiji for a while until he realizes that she was missing. Guri does just that, and stays away from Seiji; the sight of Seiji spending time with Akane and Yuzu causes her heart to ache. Meanwhile, Shikimi attempts to seduce the homeroom teacher when she was stopped by Seiji. Seiji takes Shikimi to a warehouse, asking her if she knew the whereabouts of Guri. Shikimi traps him in pink webs again, and she began to kiss him while Guri watches from a far. When confronted, Guri asks Seiji about what he thought about her; unfortunately, Seiji explains to her that she had been a thorn in his side since they first met. This causes Guri to grow dark feathers that overtake her body. Maou then arrives, and congratulates Shikimi for her work, revealing that they had been working together off screen. The feathers erupt, and reveal Guri as a demon. Because Seiji had neglected Guri, she began to doubt the meaning of love, thereby becoming a demon. Guri goes to reap the love from the city, while Maou is reminded by Shikimi about his part of the deal.

In the last epsiode of the anime, it is revealed that Shikimi was taken to Hell alongside Guri. As part of her deal with Maou, Shikimi would be made into a demon, thus gaining immortality (even though Maou himself points out that she was worse than a demon despite being a human). Shikimi soon becomes bored with her surroundings, taking no pleasure in Guri either once she sees that Guri was willing to do her work in stark contrast to her initial behavior. During their discussion, Guri realizes that Shikimi steals other peoples' belongings because she desired to be acknowledged. Shikimi denies this at first, but she does relate to how she saw how her cousins received several gifts while she watched from afar. Even though Guri warns her about leaving, Shikimi escapes and publicly reveals herself to several of the demons. When Yuzu, Korari and Seiji arrive to Hell, they come into conflict with the pink-haired girl. Shikimi steals Seiji's fake horn, thus causing them to get chased throughout Hell by the demonic police force.

When Akane tries to reason with Guri saying that if it is her duty to destroy relationships, she should've destroyed her relationship with Seiji first. Seeing this as an opportunity to destroy something of Akane's, Shikimi tries to manipulate Guri into striking Seiji down. Unfortunately for her, Guri grapples with her decision, ultimately reverting back into her angelic form when she realized that she truly loved Seiji. Disgusted by the turn of events, Shikimi began to leave, envious of the happy reunion. Guri stops her, and suggests that she should work for acknowledgement; if she were to do that, she could get included into Seiji's harem, much to his and Akane's chagrin. Shikimi takes her words into consideration, and she slowly began to change. At the end of the credits for the final episode, Shikimi watches Akane and Guri fight over Seiji, admitting that this was more interesting. At this point, it could be assumed that she finally earned her place in the Love Phone. 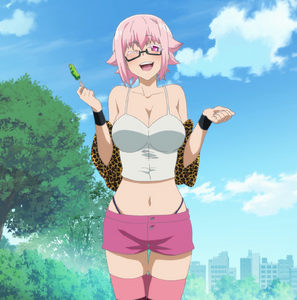