Help Kyo to defeat Rugal and all evil threats.

Be with his friends.
Win the King of Fighters tournament.

Shingo Yabuki is a recurring character from The King of Fighters series of Japanese fighting video games by SNK. He first appears in The King of Fighters '97 as the only one entry. The makers behind the fighting game series explain that Shingo is designed to be the comic foil to Kyo, the main protagonist. While Kyo was always used to be a hero, Shingo is meant to become a "simple and plain, everyday guy". To follow his persona, he was also meant to be marketed on a lesser scale of importance as part of his first appearance.

After watching the televised KOF 1996 tournament, Shingo was admired to be a huge fan of the champion Kyo Kusanagi. In one of Shingo's realized thoughts at the same school he attend, he started to pester Kyo to learn his techniques as he was fascinated with flame manipulation but he doesn't know that the flame is an inherited gift of the Kusanagi bloodline. Kyo decided to teach Shingo in exchange for food as he likes a gofer and takes pity on him. Shingo saw each of Kyo's skills only once, wrote them down, and trained them everyday. In the year 1997, he joined the participation of the KOF tournament for the single entry and passed. Although he excelled in the year of his training, he is apparently missing somewhere in the KOF tournament. As a reward for his important progress, Kyo gives him a pair of his gloves, and Shingo has worn them as his fists for performing the Kusanagi fighting style since then.

In 1999, Shingo became one of many people worried about the disappearance of Kyo Kusanagi. Benimaru Nikaido requested Shingo to join forces with him, K', and Maxima in that year's KOF tournament. Their goal was to look for Kyo's whereabouts. In 2000, he attended alongside Benimaru, Seth and Lin, but was not lucky as a result. In 2001, the Hero Team was reunited, but they required the fourth member and Shingo was called for action. He was extremely excited to fight with on the same team as Kyo. In 2002, he spent his time training with Kyo's father named Saisyu Kusanagi. Saisyu was too closed by Shingo's courage to tell him the truth about the origin of using the flame manipulation.

In 2003, Shingo teamed up with both Benimaru and Goro Daimon. When they were down, Benimaru and Daimon complimented him. However, he got cocky and started yelling that he is no longer a fan of Kyo and considered himself a rival. That is the cause when Kyo appeared behind him and began to beat him down. After Ash Crimson stole Chizuru Kagura's Yata Mirror, he visits her in the hospital and promises to unite both Kyo and Iori Yagami to investigate Ash and the weakened Orochi seal. In Hero Team's actual ending, Iori suddenly goes into the Riot of the Blood. Shingo stops him many times but is returned to be beaten with each attempt. Although saved in a sense by Ash, the wounds of Shingo are pretty severe as he is covered in a cast and bandages, making him unable to participate in the following tournament. Even he cheerfully greets Benimaru when the gets back to Japan, who gives him a "get-well-soon" gift from Chizuru. While he doesn't remember much about how Ash got there to rescue him, Benimaru fills him on his side of the story during his usual visit.

Shingo is one of the more lighthearted and silly characters in the entire KOF franchise. He describes every fighter his friend, making them consider him to be a "weird, but good" guy. Shingo idolizes Kyo Kusanagi and often dedicates his own triumphs to him. He dreams of wielding the flame element like Kyo, which is stressed to the point of comic relief throughout the KOF series. For instance, in The King of Fighters 2003, Shingo can randomly use a small flame spark when performing his move called 115 Shiki: Dokugami Mikansei (Unfinished Method 115: Poison Bite). However, this seems that only him can see this kind of flame, mainly for not being the one of the Kusanagi bloodline.

Shingo is skilled with the replicas of Kyo's fighting style without flames. He is not perfect though like taking out his handbook if he forgets a move. His moves are certainly messed up where he falls or collapses during or after using their inputs. Most of his animations are inspired with Saisyu Kusanagi, as they use the basic techniques of the Kusanagi martial arts. Also, Saisyu teaches him at some point to further hone the fighting style. 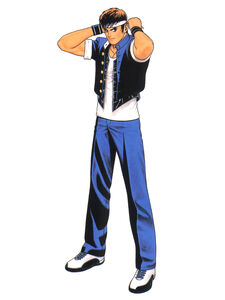 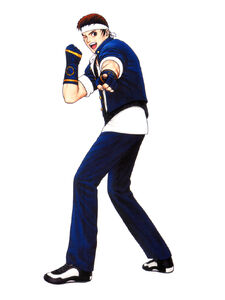 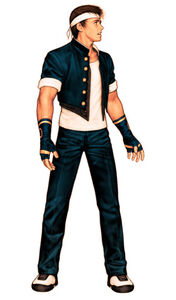 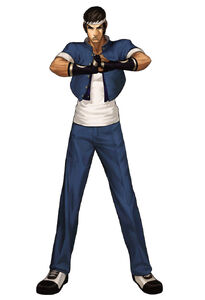 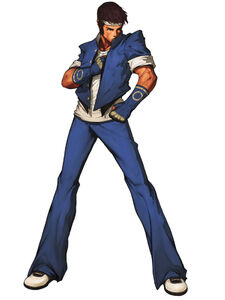 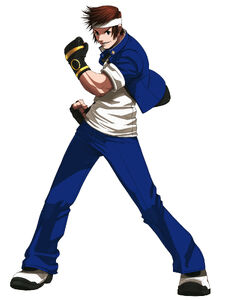 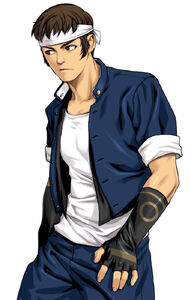 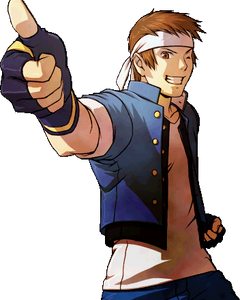 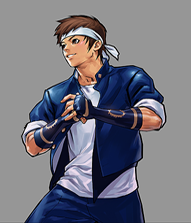 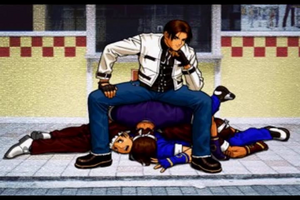 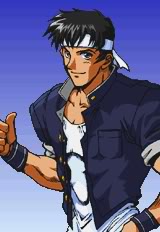 The King of Fighters: Kyo. 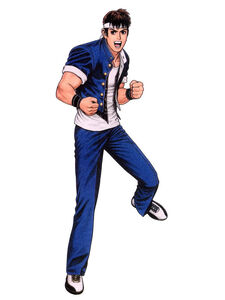 Retrieved from "https://hero.fandom.com/wiki/Shingo_Yabuki?oldid=1712211"
Community content is available under CC-BY-SA unless otherwise noted.