Superhuman strength, speed, agility, endurance and stamina, Enhanced senses, Can hit a target with a rock from 300 meters away

Hanging out with Satomi

Kill the Parasite who killed his mother, Take down Takeshi Hirokawa's group, Defeat Gotou, Save Satomi from Uragami (all succeeded)

Shinichi Izumi is the main protagonist of the anime/manga series Parasyte. He is a 17-year-old high-school student who was infected by a mysterious alien known only as a Parasite in his right hand. The Parasite later named Migi is not hostile towards Shinichi but will do whatever it takes to survive and not let Shinichi endanger him. Shinichi's independence from his parasite and retention of emotion cause other Parasites to see him as a threat. He and Migi must defend themselves from attacks by other Parasites. Fortunately, their independent thinking and ability to work as a team gives them a tactical edge over normal Parasites.

He is voiced by Nobunaga Shimazaki in the Japanese version of the anime and Adam Gibbs in the English version.

In the manga, Shinichi is of average height with a small build, short black hair and black eyes. In the anime, his hair and eyes are brown, and starts off wearing large square-rimmed glasses. He usually wears his school-uniform, consisting of a white shirt and a blue blazer, while in the manga he wears a Gakuran, an all-black, old-style japanese school uniform, with a white shirt underneath. He also tends to wear T-shirts with strangely appropriate words written on them. For example, when he first meets Migi, he has a T-shirt that says "Misery Confusion". This repeats throughout the manga.

Initially, Shinichi is a thoughtful and nice person who cares a great deal for those around him. However, he is also considered a bit of a pushover and a wimp, due to his awkwardness and paralyzing fear of bugs. All of that starts to change after being formally introduced to and acquainted with Migi, though he is understandably horrified at first. Shinichi then becomes more aware of his surroundings and excels in sports like basketball. He also overcomes his fear of bugs, due to Parasites being much scarier, much to the confusion of his mother.

When Migi proposes that they work together by "cooperating and coexisting", Shinichi initially shows great reluctance, scared of both working with an alien symbiote and the thought of killing in order to survive. He is disgusted by the Parasites killing humans senselessly, though Migi speculates that this is because it's his species that's being eaten, and points out humans eat many different lifeforms in order to survive, and that, in a way, that makes them even worse than Parasites. Nevertheless, the two are shown to be able to cooperate in a crisis, and work well together against hostile Parasites.

After his mother's death and his subsequent rebirth by Migi's cells, Shinichi gains significant resolve and resilience and is willing to risk his own life to protect his friends, family, and the public from harm. He becomes very calm and cool-headed, taking horrific events in stride without so much as flinching, a sharp contrast to his former awkward, timid self. His father even asks him outright if he's made of steel. However, he is not immune to anger, as he also shows a very vengeful side when he attempts to track down and kill the Parasite who killed his mother and took over her body, saying that the thought of such a being walking around freely makes his blood boil.

However, as a side-effect of fusing with Migi, Shinichi becomes somewhat distant and unsympathetic. His bond with Migi becomes stronger and he occasionally begins to think like a parasite, as how he described a dead dog's body as 'a lump of dog-shaped meat' (Migi even notes that that sounds exactly like something he would say). This change in his behaviour starts to worry those around him, especially Satomi, who often speculates if it's really him, or someone else entirely. This is made worse by the fact that Migi often threatens to kill anyone who finds out about him, and so he is unable to tell people the truth about what has happened to him.

Shinichi also gradually loses the ability to empathise with others and even his ability to cry. This is shown when he comes into his father's room at the hospital, speechless with grief, but unable to shed a single tear. It is also shown during the death of Kana Kimishima and her subsequent funeral, as he is still unable to cry despite feeling responsible, much to the disgust of Mitsuo, who speculates that he doesn't even care that she's dead. It is after this particular incident that Shinichi seriously starts to question exactly what he's turning into. After the death of Reiko Tamura, however, Shinichi reverts back to his former emotional state, finally accepting his mother and Kana's deaths and gaining the ability to cry again.

Shinichi's opinion of Parasites changes a lot over the course of the series. At first, he considers them to be monsters, due to them being responsible for the 'Mincemeat Murders', and vehemently dismisses Migi's claim that humans are worse, though he begins to reconsider after rescuing a dog from a group of thugs. His belief that Parasites are monsters only strengthens after the deaths of his mother and Kana, believing that they must be wiped out and being frustrated by Migi's refusal to co-operate. After being saved by Reiko and encountering the psychotic Uragami, however, he admits to Migi that he doesn't know what's what anymore, and starts to wonder who the real monster is.

Before his "death" and "rebirth", Shinichi is an ordinary human teenager who mostly relies on Migi to fight the parasites.

After being saved by Migi from dying, Shinichi developed his own powers, because of having 30% of Migi's body disperse throughout his body. Shinichi can hear, see, and sense better than normal humans. His physical abilities greatly exceed those of normal humans. 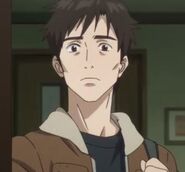 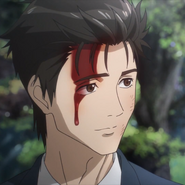 Dub version: "You don't know who the HELL I am!"

Shinichi and Satomi
Add a photo to this gallery
Retrieved from "https://hero.fandom.com/wiki/Shinichi_Izumi?oldid=1921653"
Community content is available under CC-BY-SA unless otherwise noted.