Shinigami is a mystic witch, and Karai's old friend from Japan and a new ally to the Ninja Turtles. She made her debut in the episode "City at War".

She was voiced by Gwendoline Heo.

She is first seen as a black cat and later took on the turtles and April and stole her weapon, later she went to Shredder's lair and gave her weapon not to Shredder but to Karai, later Karai explains that Shinigami is an old friend of hers from Japan, later she fights April to get her weapon back, she loses but April still gets her weapon back, later she and Karai went to an old building where Shredder stores his weapons, Tiger Claw, Fishface and Rahzar tried to ambush them, but they give the mutants the elemant of surprise, She fought Tiger Claw and tried hypnotizing him with her stone, but she was still defeated and knocked out by Tiger Claw, she and Karai were tied up and later rescued by the Turtles, she and Mikey (Who was smitten by her) fought Rahzar and later escaped, she is later seen with Karai bowing to April for forgiveness. 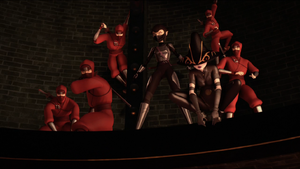