Descendant of the Dwarf

Ability to use the Lucky Mallet

Shinmyoumaru Sukuna is a Touhou Project character who debuted as the final boss of Double Dealing Character. She is an inchling living in the Shining Needle Castle.

As an inchling, she is able to use the Lucky Mallet, the inchlings' most sacred treasures capable of granting wishes and mostly used for size-changing. She wanted to give weapons and inanimate objects the ability to express themselves, so she used the power of the Lucky Mallet to do so. Her wish was granted, but it came with the unfortunate side-effect of giving unimaginable power to the youkai. This was the cause of the Youkai Rebellion. She later appeared as a playable character in Urban Legend in Limbo.

Shinmyoumaru has short purple hair and brown eyes. She wears a pink kimono with a black obi and a frilled dress (probably petticoat) underneath. She has a black bowl with golden decorations as a hat. She holds a needle on her right hand, while the Lucky Mallet is being held on her left hand. Her height is short, since she is a Dwarf.

Shinmyoumaru acts and speaks as if she was a young child. Along the same lines, she appears easily persuaded, as she readily accepted the fabricated history of the inchlings that Seija Kijin fed to her. 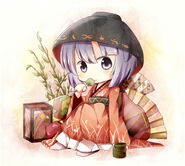 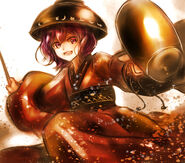 Fan artwork by Socha
Add a photo to this gallery
Retrieved from "https://hero.fandom.com/wiki/Shinmyoumaru_Sukuna?oldid=1637053"
Community content is available under CC-BY-SA unless otherwise noted.