To protect Kenichi, to destroy YAMI

Arrogant Brute
Shio Sakaki is one of the supporting characters of History's Strongest Disciple Kenichi. He is infamously known as the 100-Dan Street Brawler of Karate and is one of the masters of Ryōzanpaku dojo.

In his younger days, Sakaki was the disciple of a Sei-type master of karate. Sakaki's only known relative was an older sister who would constantly look after him. While he took his training seriously in various styles of karate, including his master's Muntenkendou-style, Sakaki's relation with his master was strained. His master was a member of Yami and was teaching Sakaki the "true styles of karate" so Sakaki could succeed him in joining Yami but Sakaki was against killing.

Also at some point in his life, he met Akira Hongō and the two became good friends and strong rivals, constantly having matches and stopping thugs together. During Sakaki's late teens, he met Suzuki Hajime, who asked to be his disciple despite only being a few years younger. Naturally owing to his dislike for taking on disciples, he refused, but was still followed by Suzuki. When finding Hongō attacked by thugs, Suzuki showed noticeable skill by saving Hongō from bullets. Sakaki and Hongō quickly grew to respect Suzuki and ultimately become friends. Suzuki would constantly referee their matches, leading Sakaki and Hongō to have a tie score of 125 wins each.

Later, Sakaki's past caught up with him as he was summoned by Yami to test him as a new member, something that Sakaki felt obligated to due as a last request from his late master. Sakaki was then surprised to find Hongō and Suzuki were also summoned. While Sakaki refused to have a death match with his friends to determine Yami's new member, Suzuki without hesitation accepted the terms in his desire to become recognized as the greatest in karate. He attacked Sakaki and Hongō, quickly pushing them on the defense. Ultimately, he was struck down mercilessly by Hongō.

While Hongō insisted he did it to honor Suzuki's greatest wish, Sakaki was enraged by Hongō's actions as Suzuki could have lived a long and fulfilling life if he had not recklessly pushed himself with his weak health. Voicing to Yami that he has chosen the path of Katsujin-ken, Sakaki attacked Hongō with the desire to make Hongō see the corrupt views of Yami. As their fight intensified, they each used their signature move and left a scar on the others face. In the end, Hongō managed to win under the belief that Sakaki died.

He has also apparently fought frequently in the Underground Martial Arts competitions in his past and was quite infamous as the mere mention of his name was enough to send everyone into a fear frenzy. For unknown reasons Sakaki was exiled from the Karate world years before the start of the series. Yet by that time he was already well known for his unparalleled combat strength and as The Brawling 100 Dan Karate Master. Sakaki also used to travel the world to fight strong opponents and work as a hired guard. He eventually joined a small group consisting of himself, a Frenchman named Christopher Eclair, and an Englishman named Mycroft. The three of them did a wide variety of jobs which included work for the FBI and guarding important people. However Sakaki's disapproval of killing eventually caused Christopher and Mycroft to turn on him but were subsequently defeated and buried alive in a desert.

Sakaki is arrogant, violent, and a drunkard, but is quite possibly the most normal of the masters at Ryozanpaku. Sakaki is a very intimidating person even when he tries not to be, something that he doesn't seem to realize and is put off by whenever someone points it out. This persona belies a kind and somewhat caring nature which he tries (and fails miserably) to hide, though he is somewhat hot-blooded and short-tempered. To this end, he could be seen as a bad liar, pointed out by Kenichi at one point when Sakaki tells him to lie about the money he received from the underground fighting tournament. Amusingly, it is shown that he suffers from stage fright and becomes extremely flustered at being the center of attention, such as when he was posing as Miu's father during a parent-teacher interview and when he was forced to train little children. He's not very good when it comes to children, as due to his intimidating nature, he caused them to cry. However, when he tried again, he at least managed to warm up to them eventually and remember all their names and they all liked him a lot.

However, out of all the masters, he is the nicest when training Kenichi. He's usually the only one who worries over Kenichi's condition in a fight or when he's left alone. Though is usually hard and indifferent towards him, it is because he cares for him and needs to be hard on him in order to push him. Sakaki also tends to be impressed whenever Kenichi impresses him and makes a remark by rubbing his finger under his nose whenever he's moved by his actions, often wondering when did he become such a man. After Kenichi nearly died trying to protect Freya and her grandfather from a master class fighter, Sakaki while praising his actions in secret along with the other masters, was seen crying tears of joy at Kenichi's progress.

At first he was strongly against taking a disciple but eventually warms up to Kenichi and shows much more concern for him than the others, being one of the few to be willing to help out Kenichi when he is in danger despite Ryozanpaku's rule that prohibits a master from involving themselves in their disciples battles. He also gambles and drinks frequently and often places bets on Kenichi. It is shown during Boris's invasion of Ryozanpaku that when Kenichi is not around, his mood becomes worse and that he hates being bothered.

He tends to get embarrassed by trivial things such as when Kenichi calls him sensei (even though it was Sakaki who told him to address him as such). His laughing is considered to be life-threatening by Kenichi, who imitated Sakaki during the second battle with Ryuto. Apachai noticed that their laughs are almost the same, to which an embarrassed Sakaki tried to deny.

He, like the other masters, can be quite childish at times and tends to get into trivial arguments with others (especially Apachai). Like the other masters, Sakaki is devoted to the Katsujinken, despite having been raised by a Satsujinken master. Most of this is due to his personal doubt of the Satsujinken, which persisted throughout his teenage life and reached a new high when he was provoked by Suzuki's death at Hongo's hand.

A running gag is that Sakaki is the closest to being 'evil' out of Kenichi's masters. During a battle, Miu once sensed his ki and immediately assumed him to be an enemy from Yami, possibly due to his angry and somewhat violent nature. Kenichi also several times during their first meetings feared Sakaki the most, thinking he was the most dangerous and violent (not yet knowing his true personality). Another instance was that during Kushinada's appearance, Sakaki began fighting against her. At the start of this, he exclaimed in joy that he would kidnap her and give her as a present to the Elder (knowing of the small history they shared). Kenichi himself mentally noted that this was exactly the kind of line a 'bad guy' would say.

Sakaki has consistently demonstrated throughout the series to be a highly powerful fighter. He is so well-versed in several styles of Karate and their respective techniques that he can easily fight in seemingly any battle situation, having shown great proficiency in various punches, jabs, chops, counters and kicks. Sakaki has used his knowledge to train Kenichi to become better adjusted the various battle situations he can face. While Dou-Type with great destructive force, Sakaki has shown repeatedly in battle to easily maintain his composure in any situation and can carefully observe his opponent's attack patterns similar to a Sei-Type. Even against other master-class opponents, he has been able to defeat his opponent without much effort. When fighting full-out, he has repeatedly been held back by his companions as he quickly overwhelms them to the point they could die. The best example of his overall prowess was shown from his brief struggles with Sehrul Rahman and Silcardo Jenazad, both members of Yami's One Shadow Nine Fists, the latter of whom was able to give Hayato Furinji a tough fight. As a result of the brief fight, Silcardo was so impressed with Sakaki's skill that he actively seeks a battle to the death with him. 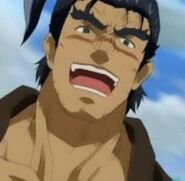