To find his long lost family

Animals
Shion is the protagonist of Shion No Kaze. He later appears in Ginga: The Last Wars.

Shion is the grandson of one of Gin's siblings, most likely the white dog.

He is a white Akita Inu mix and has blue eyes.

Shion is known to be brave when defending those he cares about and resourceful too being able to take of himself.

Like Weed and Sirius, he is calm, polite and friendly.

Shion was born a wild dog. The family changed their hiding place daily. One day, Billy disappeared in search of food for his family, and as a result, Shion's eight siblings died within months.

Kinumaru and Shion were left alone in the Tunji Forest, Billy's last hiding place, waiting for Billy to return.

He is taking bread to his mother and the car of the Sugano family accidentally crashes him.

Later, Shion and his mother make friends with the young boys, Kent and Yōsuke. Kenta regularly brings food to Shion and his weakened mother. In the end, Kinumaru is severely weakened and dies. Shion fights alone with the stray birds until Kenta and Yōsuke arrive and bury her mother.

When Kent's bullies attack an adult, Radin Shion, Shion defeats him in battle, giving the bullied Kent the confidence to challenge his bully. Seeing this, Shion was leaving his own paths and the boys couldn't see it anymore. Shion was walking alone, but he could take care of himself.

Shion is in the cabin keeping rain as Gennai, Tsuyoshi, Minoru and Kazuto arrive. Shion introduces himself to the comers.

In the morning, they talk more and eat the body of a wild boar they found in the river. Shion is told that Gennai and his staff are on their way north and the whole group of dogs decides to go to Ōu together . Close to Ōua, they rescue Rocket and Kyōshirō from the flow. The two identify Gennai and tell what happened to Ōu.

Gennai thinks that a bystander Shion might not be involved, but then Shion reveals to everyone that he is related to Gin and wants to find his roots. As the other dogs talk about Elder's message, Shion doesn't hear them roaring at the waterfall, and starts running alone and carefree toward the Futago Pass. Gennai will soon follow him. 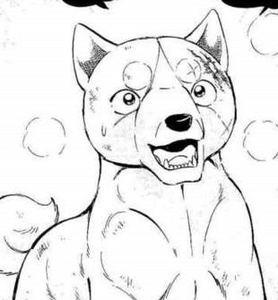 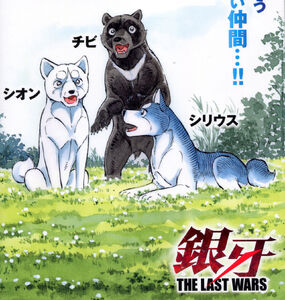 Retrieved from "https://hero.fandom.com/wiki/Shion_(Ginga:_The_Last_Wars)?oldid=1773863"
Community content is available under CC-BY-SA unless otherwise noted.