Have Kinji as her boyfriend

Shirayuki Hotogi (real name: Himiko Hotogi) is one of the main protagonists of the light novel and anime series Aria the Scarlet Ammo. She is the Student Council President at Butei High, an A-Rank Butei and the childhood friend of Kinji Tohyama. Using the Hotogi Arts, she is able to control flames and has a natural affinity for divination and fortune telling.

Shirayuki is, as Kinji quotes, a true Japanese beauty. She has extremely white skin, as appropriate to her name. (Shirayuki, meaning snow white)

She has long, flowing black hair that reaches to a little bit past her waist, with bangs that cut off at her forehead and her cheekbones. She also wears a ribbon on her hair, though it does not have much of an actual affect on it. She has very large blue eyes.

She has a breast size that is seemingly unrivalled by her fellow students, and that is mentioned numerous times by several people. Kinji claims that they are 1.5x that of Riko's, 3x that of Rekis, and 6x that of Aria's.

Raised as a Shrine maiden and acting as the current Student Council President of Butei High, Shirayuki is usually a very calm, reserved and shy girl. Often times she can be viewed as a Yamato Nadeshiko, or "the idealized Japanese woman," due to her demeanour and, her rather morbid loyalty to Kinji. Because of her extreme loyalty, she gets jealous very easily when other girls come into the picture. Upon learning Aria and Kinji were living together, she broke down Kinji's door than assaulted Aria calling her "a thieving cat." As revealed in Hidan no Aria AA, Shirayuki regularly practices with Aria dummies, typically slaying the dummies, and has a wide array of equipment to spy on Kinji.

During the battle with Jeanne, Shirayuki took off her ribbon in her hair and began to act in a manner similar to another person. It is unknown as to whether or not that ribbon holds the release key for a split personality, but it is most likely nonexistent. However, it is revealed that her ribbon was a sort of seal to temporarily unseal her massive power (referred to as Kidoujutsu), but it is still not mentioned as to whether or not it has an affect on one's personality.

Like Kinji, Shirayuki often shows signs of an inferiority complex; when Umeko Tsuzuri warns her that the fabled Durandal may be coming after her, Shirayuki initially can't understand why he would despite her being one of their best students. Even when she meets Durandal (actually Jeanne) face-to-face, she claims that she doesn't have anything to offer her, which doesn't fool Jeanne for a second. Shirayuki is something of a fatalist, once asking KInji to abandon her and save himself, saying that it is a duty of maidens of the Hotogi shrine to sacrifice themselves to save the life of another. She's even convinced that nobody will miss her if she dies, and that the people around her only praise her because of her status.

Shirayuki, birth name Himiko, was born as the eldest daughter of the Hotogi family and lived a sheltered life in her family's shrine. She would prove to be a natural at fighting and hand-to-hand combat so much so that the only way to effectively sharpen her skills was to arm her younger sisters with live weapons and ammo and constantly ambush her throughout the day. She proved more than capable at defeating her sisters and stepsister, earning the admiration of them and further cemented her status her family's prized daughter. This, however, would make her isolated life even more isolated as the Hotogi feared Shirayuki falling into the wrong hands.

Her loneliness was broken, however, when the Tohyama family visited the shrine for a regular meeting. During that meeting she met Kinji Tohyama and the two quickly became friends. He would show her the world outside of her family's shrine, despite the punishment he could face, and she fell in love with him as a result of that. The two would become very close friends, however at some point they lost contact.

Shirayuki would not run into Kinji again until their first day as new students at Tokyo Butei High where, through an accidental bump in, she would inadvertently put Kinji into Hysteria mode and cement his status as a first year Assault S-rank. Since she finally found Kinji again, she would often make meals for him and clean his dorm, something that would continue well into the series. 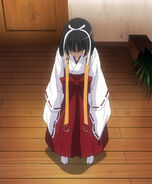 Team Baskerville
Add a photo to this gallery
Retrieved from "https://hero.fandom.com/wiki/Shirayuki_Hotogi?oldid=1860927"
Community content is available under CC-BY-SA unless otherwise noted.