Protecting Ganta and his other friends

Comedic Heroine
Shiro is one of the main characters in Deadman Wonderland and has the alter Ego called The Wretched Egg.

She is a childhood friend of Ganta Igarashi, and the adoptive daughter of Hagire Rinichirō.

Along with Sorae Igarashi, Hagire experimented on her in order to heighten a person's immune system, creating the very first Deadman by accident, along with her second personality, the Wretched Egg in order to cope with her suffering.

Shiro is an albino girl. She has snow-white hair, pale skin and red eyes; even her eyebrows and eyelashes are white. Her hair is very long and reaches down to her knees. She dresses in a peach, skintight bodysuit (white in the anime), decorated with red circles and stripes. Her toes stick out of her bodysuit, just as her heels. She also wears big brown mittens and a white neckwarmer, though has been seen wearing black mittens with a black neckwarmer and also black winter boots.

When the Wretched Egg takes over her body and Shiro becomes trapped in her own mind, she is seen wearing a white nightgown.

Shiro is a bubbly and a bit clumsy girl. She has lots of energy, most likely from the fact she eats nothing but sweets. She is shown to have loved sweets throughout her life, particularly cookies, and her sweet tooth may be her way of staying connected to her childhood. She has a very childlike outlook on life; this leads to her mind not understanding much: Shiro didn't even understand the concept of a girlfriend and had a simplified outlook on love.

Despite this, she knows she loves Ganta and only wants him to be happy, even if that means resorting to drastic measures. She is also very concerned about his safety. She does her best to protect him, regardless of the danger. Throughout the series, it is shown that all Shiro really wants is Ganta's approval, and it is surprisingly easy for Ganta to hurt her feelings. However, with the exception of him stating that he 'hated' her in the Forgery arc (which was only for Shiro's protection), Ganta has never meant to hurt Shiro and has always regretted his actions afterwards.

Shiro is incredibly strong, and she uses her immense strength to keep Ganta safe as much as possible after a childhood incident when Shiro became Ganta's "Aceman". One example of this is during the dog race show. She appeared to be oblivious of the dangers of the game and occasionally got in the way of Ganta's progression (or survival). But it is only at the end when Ganta notices her cuts and scratches that he discovers that she was discreetly keeping him away from harm, consequently taking his blows for him.

It is revealed in Chapter 36 that Ganta actually has strong feelings of love towards Shiro and that the feelings are mutual. As the series progresses, Shiro comes to understand deeper concepts of love and friendship while still retaining her pure heart. This helps her see the right course of action and also galvanizes the more jaded characters into action. She also begins acting and talking more like an adult, though her innocent nature remains intact.

Eventually, the Shiro and Wretched Egg personas fuse together to form Shiro's true self. This final, genuine persona contains characteristics of both personalities: it has Shiro's strong love for Ganta and desire for happiness, yet with Wretched Egg's bleak outlook on life and evident hatred (towards others as well as herself). Shiro's 'true self' also appears to remember everything from her life, both as 'Shiro' and 'Wretched Egg'. In the end, it is discovered that the reason she wanted Ganta to become a Deadman was for him to kill her and end her suffering. It is also revealed that Shiro's wish to die was evident 10 years ago, when she caused the Great Tokyo Earthquake in an attempt to destroy her body before it could regenerate, therefore trying to kill herself.

In Chapter 57, Ganta finally understands her and states that dying is not Shiro's 'true wish'. At the realization, Shiro begins to cry and says that she wanted to 'go to school, play with friends, ride on the ferris wheel', but she could not do any of these things. She states that she has done so many horrible things and doesn't deserve to live, but at the same time, she doesn't want to die.

In the end, all she really wanted was to be happy.

Before the birth of the Wretched Egg, Ganta and Shiro played quite often, sharing a common admiration of Ace Man. They first met when Ganta saw her sitting by a tree and commented on her white hair. Shiro became embarrassed about her hair, but Ganta told her he liked it, making her feel better and they started playing, eventually becoming good friends.

She and Ganta normally got along well, but once, when Shiro was in grave pain because of the constant injections, they once bickered so violently that Shiro broke his Ace Man action figure and Ganta took his toys and ran away from her in tears. Soon after, he came face-to-face with a rabid, vile dog, one of the other test subjects that escaped from the lab. Ganta dropped to his knees in fear and called for Ace Man to save him. Suddenly, Shiro jumped down from a window and landed on the dog, knocking it out and saving his life. After this, Shiro vowed to become Ganta's "Ace Man" whenever he was in trouble.

Because of Hagire and Sorae's experiments, her body would often deteriorate, and needed to be sewn back together. Her arm fell off once while she and Ganta were playing hide-and-seek. She has also been seen with her leg being sewn back on. She was used in excrutatingly painful nanomachine experiments, causing her to create a separate personality known as the Wretched Egg to cope with the pain. As shown her body has been ripped apart several times possibly when her limbs were removed multiple times to create the Chorus Blocks for the Mother Goose System.

Some time after that, Hagire built Deadman Wonderland and built a room for Shiro, supplying her with all the candy she ever wants. 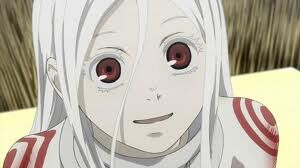 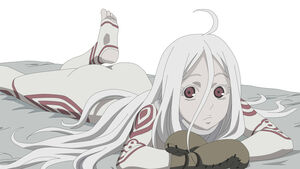 Shiro on a bed 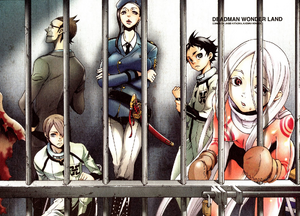 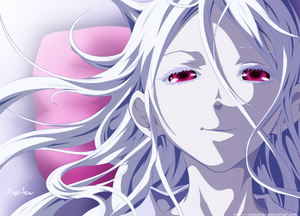 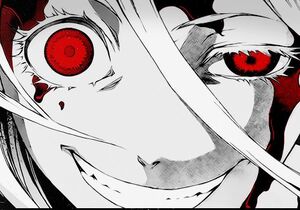 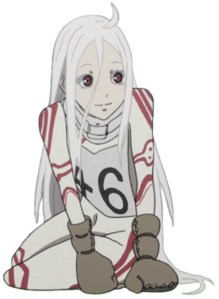 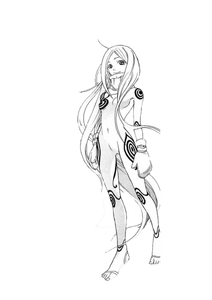 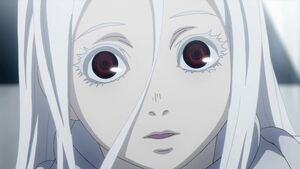 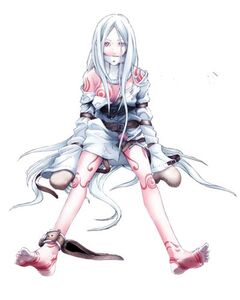 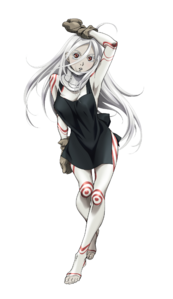 Add a photo to this gallery
Retrieved from "https://hero.fandom.com/wiki/Shiro_(Deadman_Wonderland)?oldid=2188357"
Community content is available under CC-BY-SA unless otherwise noted.