Protect the world from Destron and other evil organizations.

Originally a 22-year-old college student at Jōnan University with a major in biochemistry. But by chance, he accidentally witnessed the brutal murder of a road worker by a member of the secret terrorist society known only as Destron, which appeared after the destruction of Gel-Shocker and continues its predecessor's goal of world domination.

To rid Destron of its witness, and taking no chances, they sent Scissors Jaguar to murder the entire Kazami family. Though he was forced to watch his family die before his eyes, Shiro was saved from the same grisly fate by the interference of Kamen Riders 1 and 2. Bent on revenge for his family's deaths, Shiro pleas the Kamen Riders to make him into a cyborg just like them. The two Kamen Riders refuse at first, but after Shiro was fatally wounded while saving them, the two had no choice but to respect his wishes.

Across the series, Shiro battled Destron's cyborg monsters, eventually uncovering his newfound abilities while battling the likes of Doktor G, Baron Fang, and Archbishop Wing. When faced with Destron's strongest general, Marshal Armor, V3 was joined in his battle by ex-Destron scientist Jōji Yūki/Riderman and the Double Riders.

Eventually, V3 defeated the Destron Leader and departs on his motorcycle to parts unknown.

At V3's disposal are 26 Techinques and Weapons that were designed to aid V3 in a variation of ways from enchancing his abilities to destroying certain enemies.

Kamen Rider V3's first and foremost weapon - the Henshin belt "Double Typhoon". Kazami Shiro transforms into V3 by performing the "Henshin", a series of moves which activates the 2 revolving pistons of the Double Typhoon, and then converts the accumulated wind energy to transform Kazami into Kamen Rider V3.

The communication device between Kamen Rider V3 and the Double Riders. It can be used to communicate with the Shonen Rider Squad Headquarters and the scouts' individual Pendants.

The V3 Hopper is a surveillance advancement built into V3 by the Double Riders. Residing in a holster on the left side of V3's Henshin Belt, this mini transmission satellite is rocket-propelled vertically into the air to allow V3 an extensive view of the surrounding terrains, or to track fleeing enemies. The images captured by the V3 Hopper are directed to V3's Matrix Eye.

Spinning in mid-air, it allows the kick to generate massive centrifugal power. In the Kamen Rider Super-1 Movie, V3 uses a similar attack in combination with other Riders, called simply Revolving Kick.

By calling upon the power of Double Typhoon, Special Hardened Muscles form a powerful resistance.

A special technique that allows a devastating mid-air spinning kick to be dealt to an enemy's body.

The spring muscles can withstand up to 10 times the force put against them.

The counter-spinning attack used against opponent.

Red Lamp Power draws in an outside energy directed at V3, and doubles it in return.

Located in a circuit box on the right of V3's Henshin Belt. It allows channeling or conversion of internal or external power sources - such as the Double Rider's pendant.

A device which records and analysis enemies' attacks and weapons. The result: V3 learns from his battles and does not lose to a repeated attack/weapon.

It causes the fusing of metal blades which come into contact with V3's body; best utilized through the crossing of hands, in order to block and damage metal weapons.

It concentrates all of V3's energy into the center vertical thorax, or "Red Bone", and then expel all the energy at once.

Special Attachment to the standard V3 Hopper, which creates a sound vibration which disturbs the physical nature of mutants and legionnaires; also can create a limited personal barrier to protect humans from mutant attacks.

Kamen Rider V3's signature move. It allows a repeat kick, via springing off the monster, to the exact point of first contact. In Skyrider's movie, Eight Riders vs. Galaxy King, this attack is called V3 Double Kick.

1,000,000 volts of electricity are run throughout the surface as an effective deflector.

It expels the energy stored in the belt, causing a power concussion to the target. After performing the Reverse Double Typhoon, Kazami can only re-transform to V3 after a three-hour period.

It stores up to 3 hours of oxygen for marine battles.

It can trace the undetectable footprints of kaijin.

The X-rays can penetrate a mutant's body to locate its weak point.

The mufflers on the back assists in guiding V3 while flying, or gliding to earth.

Its special muscles allows arms to spin as a propeller, to deliver powerful blows.

It pulls full internal power to focus a sub-zero effect on an opponent or object, shot from the antennae.

It detaches from V3's body to form a rolling weapon.

Nuclear-generated power is transferred into V3's foot to allow a burning and explosive kick.

A V3 Kick preceded by a revolving movement to give it more power. Used in conjunction with similar attacks from Riderman and X.

A V3 Kick used alongside Super-1's and Black's Rider Kicks. 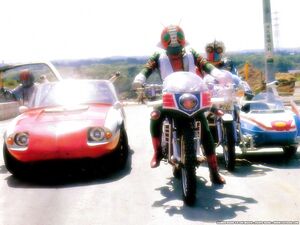 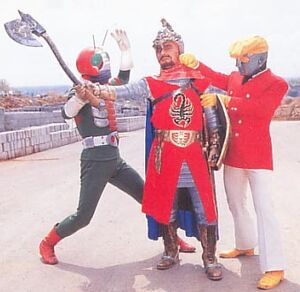 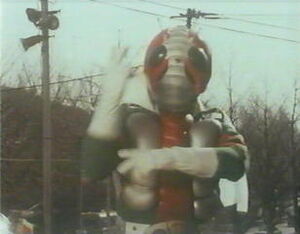 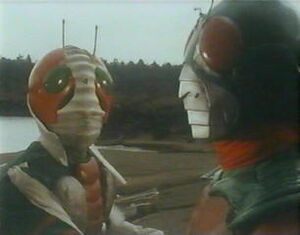 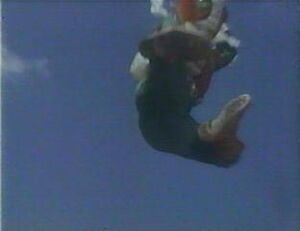 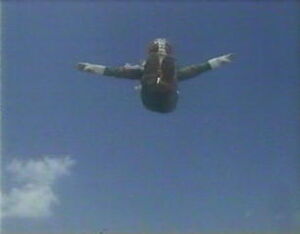 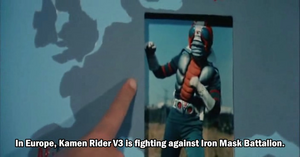 V3 as seen on a map showing the fight against CRIME in J.A.K.Q. Dengekitai vs. Gorenger. 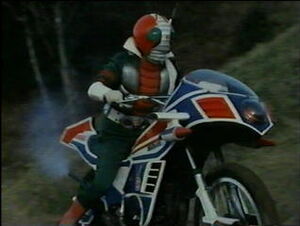 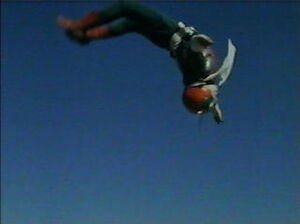 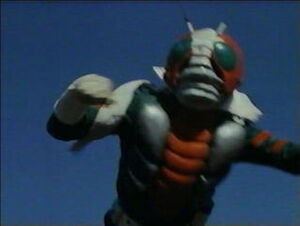 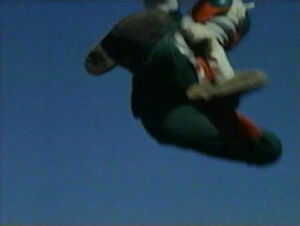 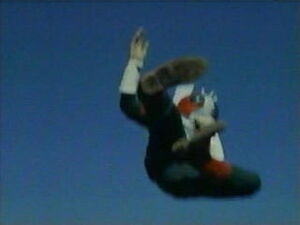 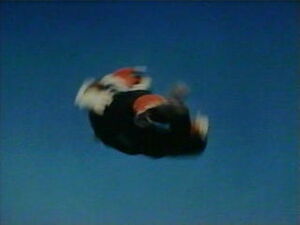 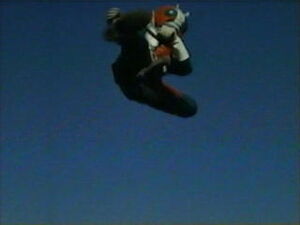 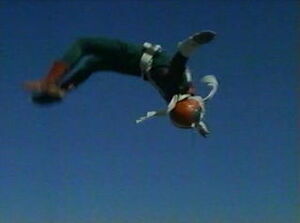 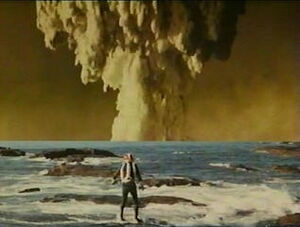 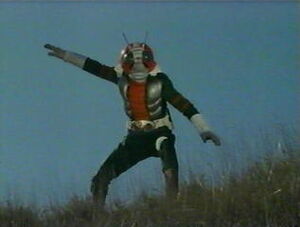 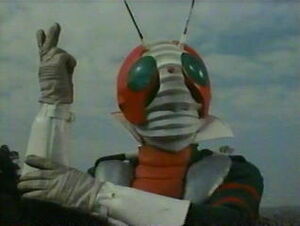 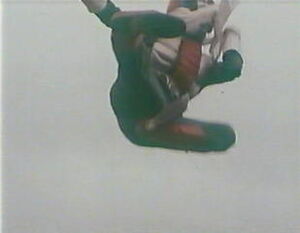 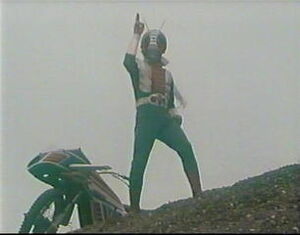 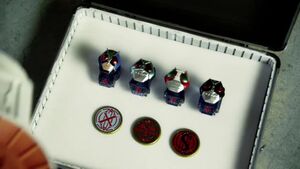 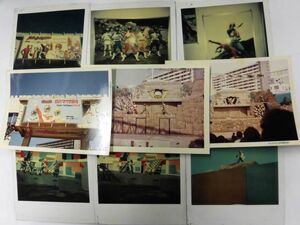 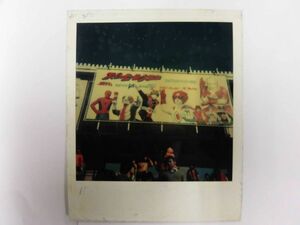 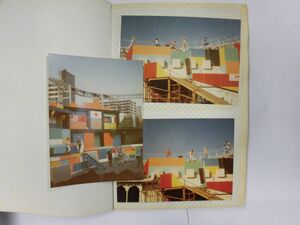 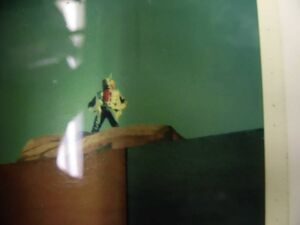 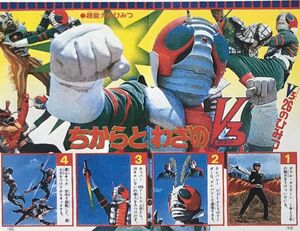 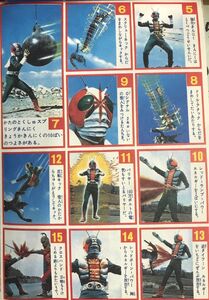 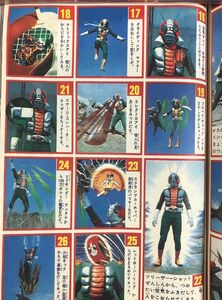 Retrieved from "https://hero.fandom.com/wiki/Shiro_Kazami?oldid=1785586"
Community content is available under CC-BY-SA unless otherwise noted.