Shiroe, Milord, The Villain behind Glasses

Rescue Serara from Susukino (succeeded), Ensure Hamelin's disbandment and free their captives (succeeded), Crush the goblin rebellion (succeeded), Acquire the Gold of the Kunie (succeeded), Prevent a war with the People of the Land

Shiroe (real name: Kei Shirogane) is the main protagonist of the light novel and anime series Log Horizon. He is a 23-year-old engineering graduate student and a veteran player of the MMORPG game Elder Tale, and one that was pulled into the game by a mysterious phenomenon referred to as the Apocalypse. With no foreseeable way of returning home, he forms a party with his friends Akatsuki and Naotsugu, and later becomes the Guild Master of the titular Log Horizon. He is a Half-Alv Enchanter-Scribe.

He is voiced by Takuma Terashima in the Japanese version of the anime and Mike Yager in the English version.

Compared to his real-life body, Shiroe is several centimetres taller in Elder Tale and his figure became slightly slimmer. When he first regains consciousness in the game, he notices that his hands are more slender but also seemingly more dexterous. Shiroe in real life has black hair and a slender build, and also wears glasses. Currently, he's one of the few characters seen outside of the game.

Shiroe wears round glasses and is described by Naotsugu as having eyes that are "sanpaku," a term that means that the iris is small and doesn't completely cover the vertical axis of the eye.  Although this is also the result of his Half-Alv race, he notes that he is insecure about it since he was called the same thing in real-life.

In Shiroe's original outfit, he wore a brown turtle-neck sweater with a harness-like thing over it. He wore green pants that go from a lighter green on the top to a darker green right above the knees. Dazaneg's Magic Bag almost always rests on his left side, held in place by a belt. His boots follow a similar colour scheme as his pants. A bracer always sits on his forearm, although whether it provides any sort of purpose is unknown. This outfit is topped off by his signature cloak, which has a collar large enough to comically serve as a basin for water.

Naturally a cautious and thoughtful introvert, Shiroe has played Elder Tales since middle school and is a veteran with a near-encyclopaedic knowledge of the game, which is known for its depth and complexity. Even as a child, he disliked playing outdoors and from middle school-on preferred to stay indoors, where he used computers to explore virtual reality. Shiroe is implied to have been quite lonely before the Apocalypse as he had few friends and lived with parents who worked long hours. He also suffered from insomnia and depression, and would frequently take walks outside late at night to clear his head. Shiroe remained somewhat of a hikikomori through college, and he notes upon regaining consciousness in Akiba that it's been awhile since he was last outside.

Although Shiroe is socially awkward and tends to be asocial, he does not actually dislike other people. Instead, he is fiercely independent and wary of others who approach him with ulterior motives. This stems from the fact that people used to approach him just for his vast knowledge of the game, which is the reason he avoided being in a guild for so long. The sole exception was the Debauchery Tea Party, who wanted him just to have fun adventuring together, which he seems to really enjoy.

He is not above helping people who are really in need, such as when he willingly gave his appearance-changing potion to Akatsuki without expecting anything in return and helped save Serara from Susukino. He also appears to have a soft spot for beginners, such as Touya and Minori, as he served as their mentor when they first started playing the game. In addition, he can be quite protective of people he cares for, a trait that Nyanta used to tease him about. While a generally serious individual, he at times displays a dry, acerbic wit, particularly when around Naotsugu.

Shiroe is a rather humble person, having trouble accepting praise and often downplaying his achievements and contributions to a situation. However, even if he knows that others might not appreciate his actions or thank him afterwords, if he sees it as the greater good, he will use any means possible to achieve his goals. An example is when he bribed three guild masters into giving him a huge pile of gold in order to buy the entire guild building so he could force people to go along with decisions made by himself or his newly-formed council, which he did so in order to force Hamelin's disbandment and free the players they were holding hostage, of which included Touya and Minori. Shiroe also has a bad habit of keeping his true intentions to himself until the last possible moment, a trait that annoys Rundelhaus as to him, it means he can't even rely on his own guildmates.

Despite this highly pragmatic nature, there are nonetheless plenty of lines Shiroe isn't willing to cross. This shown when he bluntly refuses to go with Nureha to Minami and use her and the People of the Land's resources for his own personal gain, even if it meant finding a way back home. Indeed, Shiroe is often shown to be a strong believer in freedom and looks down on guilds that take advantage of and enslave low-level players, such as Hamelin, especially since the lack of permanent death in Elder Tales means imprisonment can be a fate worse than death.

While he always has good intentions, Shiroe's approach to solving problems has understandably earned him a less than favourable reputation, with many dubbing him 'The Villain behind Glasses'. It should be noted that this is intentional on Shiroe's part, with him playing the 'bad cop' to the other guild masters' 'good cop' and getting people to spread nasty rumours about him. Eventually, he is called out on this by Minori, as she doesn't like people seeing him as a bad person due to all the good he ultimately ends up doing and asks if he's okay with that. Shiroe replies that he had never thought of it that way, and ultimately seems more focused on the bigger picture rather than his own personal reputation. However, he does later spend time contemplating this, and debates whether pushing people away is really a good thing in the long run. Overtime, Shiroe learns the error of his ways and learns to rely more on those around him.

Shiroe's main class, the Enchanter, is the least popular of the twelve main classes in Elder Tale. Lacking the firepower most would associate with a magic-user class, the Enchanter is a pure-support class that shines only when supporting the party with its buffs, de-buffs and binds. Ironically, this is precisely the reason Shiroe was drawn to it as he loves it for its potential, its complexity, and because the idea of "a class that can't do anything on its own" offered an experience totally opposite from his tendency toward independence and self-reliance.

Due to his expertise in CAD drawing as an engineering student, he chose Scribe as his subclass. After the discovery of cooking without the in-game menu allows a player to produce out-of-the-game products, he started experimenting with his Scribe subclass. After learning about Spirit Theory from ReGan, the Sage of Mirror Lake, he was confident that if the conditions are met, it could be used to create new magic and laws. 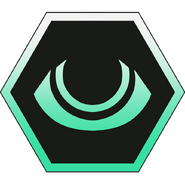 The symbol of the Enchanter, Shiroe's class
Add a photo to this gallery

Nightmare Sphere
Add a photo to this gallery
Retrieved from "https://hero.fandom.com/wiki/Shiroe?oldid=1844047"
Community content is available under CC-BY-SA unless otherwise noted.