Barbie and the Magic of Pegasus

Hanging out with Annika.

Help Annika to find the Wand of Light and stop Wenlock (succeeded).

Animal Sidekick
Shiver is a polar bear cub of Princess Annika and the tetartagonist in the 2005 animated film, Barbie and the Magic of Pegasus. She is voiced by Kathleen Barr, and Jennifer Hale in the PC game. While skating Princess Annika finds her and saw her shivering, so she named her Shiver. She accomponies Princess Annika throughout the journey.

While skating, Princess Annika notices a bear cub falling on the ice. She has would takes it in her hands and notices it shivering, so Annika calls her Shiver. However, Annika decides to take her along in the castle, but Annika's parents are against it. They have a quarrel, Annika runs to her room and then tells Shiver she'd like to visit the party. While Annika skates, Shiver, too, tries to skate. Later on, she escapes Wenlock along with Annika and Brietta.

In Cloud Palace, Shiver is having fun with the cloud princesses. Then they fly to discover the components of the Wand of Light. They get trapped in the Forbidden Forest, then Aidan sets them free and calls Shiver "Annika's cousin", mocking her relationship to Brietta the pegasus. Later on, Shiver, along with Annika, got caught by Ollie the Giant and put into his pot. Shiver enjoys the warm there, but Annika tells her it's not good, and finds a way to get out of the pot by talking with Ollie. Later, when they come to find the gem, lit by eternal hope, Shiver causes an avalanche in the treasure cave, because she took too much gems.

When Wenlock tries to attacks Annika, Shiver wakes Brietta up and shows her Annika's in trouble. Then, Shiver joins Annika and Aidan in their ice race to Wenlock's castle, riding on Aidan's leg and then shoulder. In Wenlock's castle, Shiver is told by Annika to find the Wand of Light. First, Shiver starts playing around with gems, but then she finally discovers the wand, but the gem just fell out. Then, Shiver appears in the final scene, skating in the Cloud Palace, along with Annika and Aidan. There, she is wearing a crown and a skirt.

Shiver is an adorable bear cub. She is very friendly and also mischievious. Shiver adores sparkly things, such as jewellery, and throughout the journey, she gets extremely fond of Princess Brietta and Prince Aidan. She also helped Princess Annika found the Wand of Light. 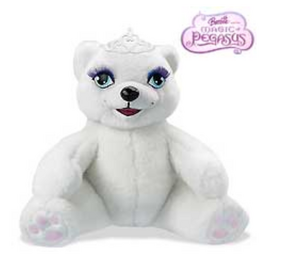 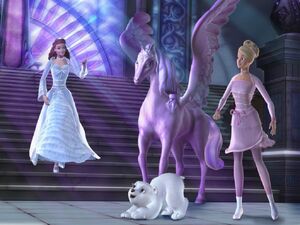 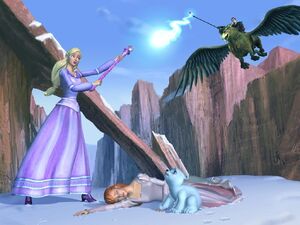 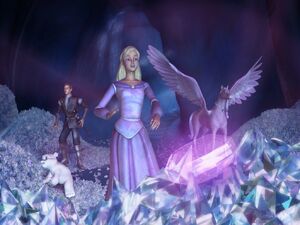 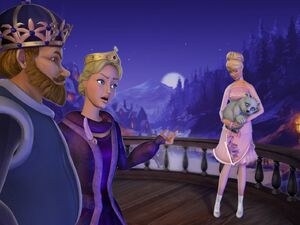 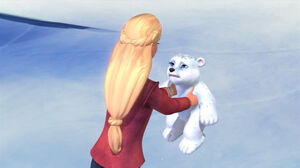 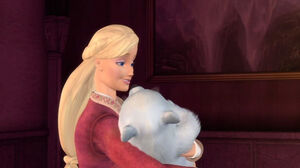 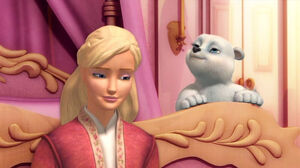 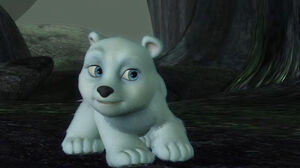 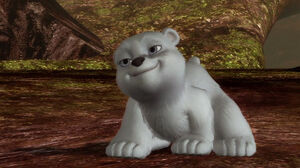 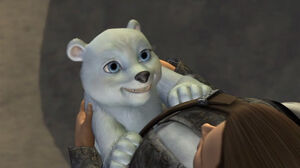 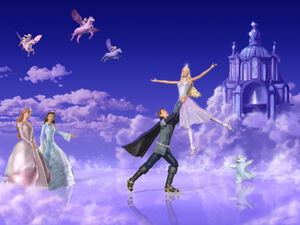 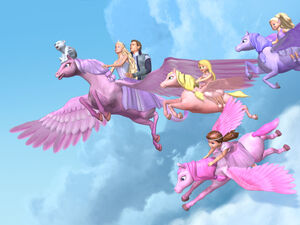 Retrieved from "https://hero.fandom.com/wiki/Shiver_(Barbie_and_the_Magic_of_Pegasus)?oldid=1923982"
Community content is available under CC-BY-SA unless otherwise noted.