Heroes Wiki
Register
Don't have an account?
Sign In
Advertisement
in: Plagiarism, Candidate for Deletion, Female,
and 12 more

Going to school, Going out on dates with Natsuru, Teasing Mishima

Take out Kaede, Protect Natsuru, Have Natsuru as her boyfriend (succeeded)

Shizuku Sangou President of the Student Council and one of the Three Beauties of Seitetsu, she is a model student with perfect attendance record. In addition, however, she is also a Red Kämpfer fighting with the Schwert ability of wielding two chained daggers at will. She wants to expose Moderator's intentions but has no problem fighting Blue Kämpfers until that goal was accomplished. After being spared following a defeat by Natsuru Senou, she enters a truce with Natsuru and Akane and has since taken an interest in Natsuru in a slightly sly and teasing manner, throwing him off balance with embarrassing remarks/actions while maintaining a poker face in the process, despite being constantly treated with suspicion as a result. After being invited by Kaede to visit her home and then spend the night there, however, Shizuku is seen getting inquisitive about what happens after Kaede snuck into Natsuru's bed and then wondering if she is indeed feeling jealous over Kaede getting the chance to do so.

Later on she continues to give off hints that she is romantically interested in him, asking him out on a date and eventually deep-kissing him in front of Sakura and the others although her constant ambiguity again seems to become her undoing (a fact she seems to have realized, calling her love an unrequited one), as Natsuru keeps thinking that she is up to something whenever she makes an advance on him.

Shizuku is a tall, eighteen-year-old, Japanese girl. She keeps a long fringe - just over her eyes - and keeps her raven-black hair long and in the style of a hime cut. She is amazingly beautiful, so much so that she is considered to be one of the Two, later Three Beauties of Seitetsu. She has been described as having the face and body of a fashion model, as well as being very athletic. In the anime, she has purplish-blue eyes, and has no specified eye colour in either light novel or manga. Her breasts are shown to be big, though her sizes are never specifed. She is regularly seen with her school uniform on with her red choker. She once appeared in a bikini that showed off her beautiful figure. Her other clothes reflect her personality, and are more formal than those of other characters.

Shizuku's transformation to a Kämpfer is among the least drastic. When transformed, her hair carries a two-toned complexion of black and white. As these hairs are seen to be closest to her body, it is possible that her hairs at the sides and back of her head are the only ones which undergo this colour change. It may be for this reason that Shizuku keeps her hair long; doing so allows her to appear normal even after having transformed, thus allowing her to communicate naturally with other students and teachers. It is unknown if this was intended, or simply a helpful coincidence.

Shizuku has a strong, but quiet character, and as an honours student and Student Council President, she is known to be disciplined, dependable, responsible, hard-working and uncompromising. She is the most reasonable of her team (except in regards to treating Natsuru) and is usually the quickest to find any problems and solutions to them. She is usually depicted as having less emotion than her allies. Whether she has trouble showing emotions, or simply wants to control showing them, is unknown. Any small change seen in Shizuku in terms of emotion usually means that there is a strong undertone under it all. She is normally treated with suspicion by her allies, as they never really know what she is thinking, or how she is feeling.

Shizuku is reluctant in being selected as a Kämpfer, though she does not show it. She is driven by a need to uncover the intentions of the Moderators, and Sakura Kaede's role in it all. She has shown to be extremely protective of Kaede, and resents any harm that comes to her. When Akane nearly shot Kaede in the school library, Shizuku flew into a rage and renewed her furious attack on her and Natsuru. She is worried that Kaede, her childhood friend, is responsible for turning her into a Kämpfer, though she intends to help Kaede if it seems that she was not in control of her actions. She has no hesitation in eliminating enemy Kämpfers in achieving her goals.

The President of the Student Council and one of the Three Beauties of Seitetsu, she is a model honor student with a perfect attendance record. She has a lot of admirers, especially from the boys' side who are obsessed with fantasies of her dominating them as Student Council President. She has a calm, confident demeanor which is sometimes interpreted as cold and calculating, especially by Natsuru. She is a Red Kämpfer, which initially puts her at odds with him, and is also a Schwert-("sword-")type Kämpfer who prefers to fight wielding two short swords/daggers linked by a chain. Her weapons have the special property of extending its chain length to necessary lengths to enable her to fight even at long range. In her Kämpfer form, the reverse side of her long black hair partially turns white, which makes the color change only visible from the front, while leaving the her hair dark when seen from behind. She easily deduces Natsuru and Akane's Kämpfer identities after encountering them in the library and interrogating them. She has a personal objective of finding the reason why Kämpfer must fight each other, and to that end she initially fought the Blue Kämpfer to learn more.

After being defeated by Natsuru and Akane in a battle, she is spared by Natsuru in exchange for Shizuku not involving Kaede in future battles. She enters an informal truce with Natsuru and Akane while she gathers more information about the Kämpfer system and has since taken an increasing romantic interest in male Natsuru, slyly teasing him with her demands and advances, even going so far as to steal his first kiss all without losing her composure and demeanor, which makes Natsuru even more suspicious of her, despite her not harboring any actual hostile intentions toward him. Shizuku continues to give off hints to Natsuru that she is romantically interested in him, in spite of his extra denseness regarding her feelings, even asking him out on a real date and even passionately kissing him in front of Kaede and the others, although her ambiguous demeanor again seems to become her undoing (a fact she seems to have realized, calling her love an unrequited one), as Natsuru keeps thinking that she is up to something whenever she makes an advance on him.

She seeks to know why Kämpfer must fight because, as she told Natsuru, she resents being used as a pawn by the Moderators, and seeks her goal in the hope of fulfilling her ultimate objective of taking revenge against the organizers of the Kämpfer system, which cost her the life of a dear friend in the past, who was also a Red Kämpfer like her. In order to fight back against the system, and indirectly its organizers, she and her new Red Kämpfer ally Mikoto later enter into a formal truce and join forces with the Blue Kämpfer Natsuru and Akane, violating the rule that all Kämpfer must fight, antagonizing the Moderators in the process, who send the White Kämpfer to eliminate them for rebelling against the system. As a Kämpfer, the messenger assigned to Shizuku by the Moderators is Electrocuted Wildcat, a plush toy that is part of the Entrails Animals series of stuffed toys. When in the end Natsuru chooses Akane, she cries for him because her love was genuine.

Shizuku is a Schwert User. She uses two chain-linked, double-edged knives. She is able to use them in a close-up melee, or as a ranged weapon. The chain between them is able to extend at will, which Shizuku uses to great advantage. She is able to cut through most objects, only being stopped by hard objects, like steel bookshelves, a large mass such as the ground, and Gewehr and Schwert weapons. It is known that Shizuku can deflect Zauber-type attacks and bullets.

Shizuku is a very aggressive fighter, and will usually be the first to initiate combat. She is not afraid of running away if the situation calls for it, and returning stronger and deadlier. She is known to manipulate potential combat areas prior to fighting, in order to swing the odds in her favour. She is potentially the most dangerous individual on her team, along with having the most experience. Red Kampfers are "Three times faster" than a normal human, as mentioned in the anime. This gives Shizuku even greater athletic prowess and agility then she would normally possess. As well she can manipulate a magical pair of swords that are connected by chain, lengthening or shortening the chain as required. 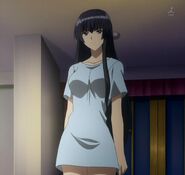 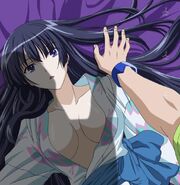 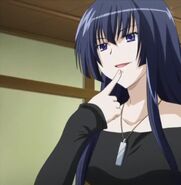