God of Destruction (in a Bartender Suit)

Basking in the sun.

Shizuo Heiwajima is one of the main protagonists of the light novel and anime series Durarara!!. A violent man born with inhuman strength, he is the archenemy of Izaya Orihara and is one of the two strongest men of Ikebukuro with the other being Simon. He is also the older brother of Kasuka Heiwajima.

Shizuo was born to two normal parents and has a younger brother named Kasuka.

One day, when he was a child, his monsterous strength first surfaced when he snapped and try to hurl a refrigerator at his little brother when he ate his last pudding, whenever Shizuo gets angry or if someone irritates him, he would break a plastic spoon or a pencil (as a child) and a cigarette (as an adult) in half and crush it under his foot and hurls a nearby object at them, but strains himself and breaks a bone in his body which ends him in the hospital everytime.

However, this physical abuse made him stronger and he became adjusted to lifting heavier objects as time goes by. Shizuo was a fellow high school classmate with Izaya Orihara, Shinra Kishitani, and Tom Tanaka. As Shizuo first entered high school, he quickly became rivals with Izaya, and everyday on the streets, the two would battle and try to kill each other all the way through graduation and clear up to adulthood. Shizuo stated that there was no good reason and because he just hates him. After graduation, Shizuo tried to get a job and was fired everytime because of his short temper. Finally he became a bartender and Kasuka even gave him new outfits. However he was fired there also because he was framed by Izaya with the police. The police soon found that Shizuo was innocent and was freed. He was quickly found by Tom and was hired to work with him. From here on out, Shizuo became Tom's personal bodyguard.

Throughout the entire series, Shizuo works as Tom's bodyguard. Whenever he has the freetime, Shizuo would try to hunt down Izaya and the two will often battle. However, Shizuo does have some major roles in the series. His first role was when he narrated about his past, how he and Izaya became enemies, and how he became Tom's bodyguard. His second role was when a blade called Saika possessed most of the citizens of Ikebukuro and that they are after him so that they can contain his strength, but with the use of Celty's powers which took in the form of gloves for Shizuo to use, Shizuo took out the Saika controlled citizens until they where back to normal. His last major role was when Izaya phoned Shizuo to tell him that Kasuka was in danger of being killed by his hardcore obsessed fangirl's ex-boyfriend and Shizuo ironically guessed the man's coming to Izaya.

Izaya then made his appearance and mockingly confessed to Shizuo on the phone that he did gave the man Kasuka's schedule so that he knows where he will be and that since Shizuo is around he would come to his aid. The two closed their phones and Shizuo ask Izaya what he is up to. Izaya told him that he is going to leave town for a while and go underground but he first wanted to settle a score between him and the city. In turn, the two rivals had one final battle.

He later sends Igor and Ruri flying after they steal from him.

Shizuo has a very short temper and can get angry very easily. Whenever someone is near him and says or does something that irritates him, he would throw something at them and knocks them out.

However, Shizuo never beat up women and whenever he is annoyed by their consent talking, he just calmly walks away. In truth, Shizuo really hates violence, and he is the source of violence itself. Shizuo wishes that he never had this strength and that his body has a mind of it's own and that it easily responds to his deep, raging anger.

Nevertheless, Shizuo loves his younger brother Kasuka and was even concerned about his well being when Izaya phoned him on his cellphone to tell him that Kasuka was in danger of being killed by his fan's ex-boyfriend. He hates Izaya with passion and that over the years he wanted to catch and possibly kill him because he is sick and tired of Izaya framing him for wrongs he hasn't done and for being the bane of his existence.

Shizuo was born with dark brown hair which he dyed blonde when he was a teenager. When he was attending Raira High School, he wore his formal uniform which includes a white dress shirt, a tie, and matching blue academy jacket and pants. When he was working as a bartender he wore a white shirt with a black vest, black pants, black dress shoes, and a black bow. When working as Tom's bodyguard, he wore the same outfit and he even wore dark blue sunglasses which he takes off when he is fighting. He is very tall and muscularly lean and he is seen smoking a cigarette most of the time.

Enhanced Strength: Shizuo after attempting to lift the fridge and crush his brother with it, it has made his mental limiters necessary to restrain muscle strength to be removed, and now he is greatly known to be the city's most strongest man. His strength first surfaced when he was a young child. His special abilities is parkour because of his years of battling Izaya who also masters parkour. He can lift objects that weighs around 25,000 lbs in average such as trucks or cars.

Improbable Weapon Proficiency: He uses objects near him such as trash cans, street lights, street signs, coke machines, etc. as defensive weapons against Izaya's blade attacks or he uses them as long ranged offensive weapons.

Pain Suppression: After years of his body being adjusted to the abuse, his body can take on any physical abuse that no mere human can survive such as being shot several times, getting hit in head by a baseball bat, getting hit by a truck which sends him flying about 20 feet in the air, and getting his hand stabbed by a pen which hardly has any affect on him whatsoever. 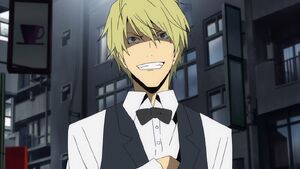 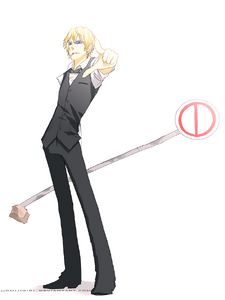 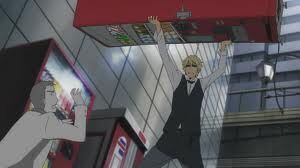 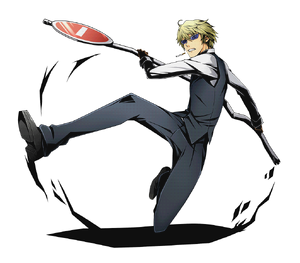 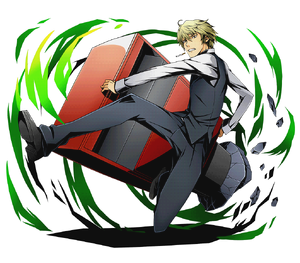 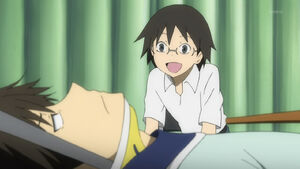 Retrieved from "https://hero.fandom.com/wiki/Shizuo_Heiwajima?oldid=2210278"
Community content is available under CC-BY-SA unless otherwise noted.