Shmi Skywalker was the mother of Anakin Skywalker, grandmother of Luke Skywalker and Leia Organa, and great-grandmother of Ben Solo. A brave and resilient woman who survived life as a slave to become a Tatooine moisture farmer. Shmi surrendered her son to the Jedi Order, putting him on a path to become one of the greatest Jedi. Her death at the hands of Tusken Raiders sent Anakin down a path that would ultimately end in his fall to the dark side.

She was portrayed by Pernilla August.

Shmi Skywalker is introduced as a slave on the Outer Rim world of Tatooine during the waning years of the Galactic Republic. She conceived a child, Anakin, without a father; it is implied that she was impregnated by the Force itself. During his early years, Shmi and her son are the property of the crime lord Gardulla the Hutt, who lost them in a bet to the junk dealer Watto. Shmi provides a good home for her son and is determined that he would have a better future. She is aware that Anakin has special powers, including the ability "see things before they happen". Anakin is also a skilled mechanic, and builds the protocol droid C-3PO out of spare parts to help Shmi.

Later Anakin brings home the Jedi Qui-Gon Jinn, the handmaiden Padmé Amidala, the astrodroid R2-D2, and the Gungan Jar-Jar Binks, all of whom are stranded after crash-landing on Tatooine while on a mission to Coruscant. Shmi opens her home to the travelers and tells them of the hardships of slavery on Tatooine. Anakin tells the stranded group of the upcoming Boonta Eve Podrace and offers to win the money they will need to fix their ship. Shmi at first disagrees, but then reluctantly allows her son to try to help.

Shmi later confides in Qui-Gon that Anakin was conceived without a father, leading the Jedi Master to believe that Anakin may be the Chosen One of Jedi prophecy, destined to bring balance to the Force. On the day of the race, Qui-Gon sponsors Anakin and makes a wager with Watto that if Anakin wins that he be granted his freedom and his mother's, but Watto is unwilling to let both slaves go, so Qui-Gon chooses Anakin. Later Shmi, Qui-Gon, and Padmé watch the race above a tower while C-3PO and R2-D2 watch on the sidelines. Against all odds Anakin wins the race and his freedom.

Qui-Gon announces that Anakin is now free to come with him to Coruscant, where he will train to become a Jedi. Anakin protests that he should stay with his mother, but Shmi selflessly tells her son that he should go in order to have the future he deserves, one that she cannot give him. Shmi embraces her son one last time and tells him to be strong and not to look back. Anakin vows to return to Tatooine one day and free her.

Ten years later, Anakin, now a Jedi Padawan. returns to Tatooine, having seen a prophetic vision of Shmi in pain. He questions Watto, who tells him he sold her to a moisture farmer named Cliegg Lars a few years after he left. Anakin learns that Lars bought her freedom and married her, but that she had been kidnapped by Tusken Raiders a few week before. Anakin finds Shmi at a Tusken camp on the brink of death, having been beaten and tortured by the Tuskens for days. She is overjoyed to see him, however, and tells him how proud of him she is before dying in his arms. Anakin flies into a murderous rage, and he slaughters the entire tribe. He returns to the Lars homestead with her body, and promises at her grave to never let anyone he loves down again. This foreshadowing his eventual fall to the dark side brought on by his fear that his wife, Padmé, will die in childbirth. 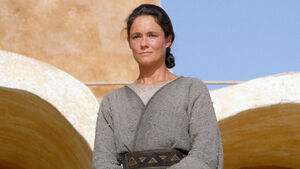 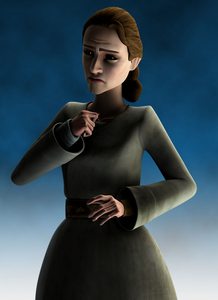