Shocksquatch has the appearance of a thick, muscular gorilla-like alien. He has white, gray, and blue fur, along with a reddish-pink face, and pointed eyebrows. He also has green eyes with black pupils. He has metallic gray circular bolts on the back of his hands and on his lower jaw. He wears the Ultimatrix symbol on his chest.

In Omniverse, Shocksquatch appears slimmer than before and he now has yellow and black fur, along with grey fingers and toes. He now has four fingers instead of five. He also now has two bolts on the side of his wrist instead of the back of his hands. He has green eyes with black pupils and yellow horns. He also has a green belt where the Omnitrix symbol is located. 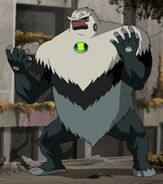