Kill all the Nazis in the Le Gamaar Cinema (succeeded)

Shosanna Dreyfus is one of the main protagonists of the 2009 Quentin Tarantino film Inglourious Basterds. She is Jewish, French, and the owner of the Le Gamaar Cinema and she plans to burn the theater with more than 300 Nazis in it.

She was portrayed by Mélanie Laurent.

Once Upon a Time...in Nazi-Occupied France

In 1941, Col. Hans Landa was going Perrier LaPadite's house for the search for Jews, in Perrier LaPadite's house, there were a family of Jews with Shosanna, her father, Jakob, her mother, Miriam, her brother, Amos, and her uncle, Bob. There were hiding under the floor boards. Once Perrier LaPadite told the location the Jews to Hans Landa, Hans brings his Nazi soldiers kill to the Jewish family. Everyone died with the exception of Shosanna, who escapes outside of the house and runs off to the distance. Hans Landa had a chance to shoot her, but decides not to, probably because she was to far away.

In 1944 of June, four years after the massacre of her family, she is now the owner of the Le Gamaar Cinema after her aunt left it to her. As she's taking off the letters on the marquee, she meets a German soldier named Fredrick Zoller. They then talk movie and cinema in general, after their conversation, Fredrick leaves while continues what she was doing.

The next day, Shosanna is sitting at a bistro smoking cigarette and reading a book. Through a window, Fredrick encounters her again and he comes in the bistro to talk to Shosanna. Fredrick tries to be friends with Shosanna, but Shosanna refuses because of the uniform that Fredrick is wearing. Fredrick tells her about his famous achievements in the war, while she uncomfortably listens. Fredrick reveals he's killed hundreds of people, and hence, he is considered a war hero. He also said that they were going to make a movie about him called "The Nation's Pride" staring himself. This causes Shosanna to ditch him angrily and leave the bistro.

She then goes back to cinema to clean the letters on the marquee. As she's doing that, a car stops and a Gestapo Major comes out. He tells Shosanna to get from the latter and tells her to get in the car, she agrees to come with them, thinking that her cover has blown. She was instead escorted to a restaurant. She was greeted by Fredrick to meet his friend, Joseph Goebbels and his translator Francesca Mondino, as well as the Gestapo Major who brought her there, Dieter Hellstrom. At the dinner table, Zoller convinces Goebbels to premier the film at Shosanna's theater as a private screening. They were then interrupted by Col. Landa, Shosanna was getting flashbacks of Landa's massacre on her family. Everyone leaves the table with the exception of Shosanna. Landa sits at the table after the others leave and orders some strudel for both as well as a glass of milk for her. He begins to ask her about her cinema and before he leaves he tells her there's another thing he wanted to ask her. Thinking her cover is about to be blown for real, she pauses for a moment, with her cigarette in her hand, but then Landa changes his mind and kisses her hand before leaving. She immediately begins to breathe heavily, and almost cries when she realizes how close she was to being discovered. After the film screening, Goebbels asks her if she liked "Lucky Kids", she says that she liked Lillian Harvey, which causes Goebbels to rant her name, and to never mention her name in his presence.

Back in the cinema, Shosanna has a plan. With the help of her lover, Marcel, they plan to burn down the whole theater with all the Nazis with it.

Revenge of the Giant Face

Shosanna is seen in her room, by her window, looking down at the street, obviously at the incoming Nazi crowd. As she prepares for the show, we see a flashback of her plan: she records herself, then she and Marcel kidnap a French movie developer and force him to develop their film into a reel film; Shosanna then has the film treated and edited into one of the movie's film reels, replacing one of Zoller's dialogue scenes with her message of vengeance.

She sends Marcel backstage of the movie as the movie is playing to be prepared to burn it down. As she is handling the projectors during the premiere, Zoller comes up to see her. She unlocks the door for him, she tells him to leave and he can't be in, but Fredrick forces his way inside, which hurts Shosanna. Fredrick threatens her and asserts his dominance by saying he, because of his status, is a person you can't say no to. Shosanna tells Fredrick to lock door, he agrees and locks the door. As he locks the door, Shosanna shoots Fredrick in the back three times with a pistol. She continues with her plan, but then then she sees that Fredrick is limbering and still alive. Feeling remorseful, she goes to check on Fredrick, but then Fredrick takes out a pistol and then shoots Shosanna in the stomach three times. As she's on the ground, bleeding out, Fredrick, still laying on the ground, shoots Shosanna in the stomach again, and then Fredrick and Shosanna both die.

Meanwhile,as the film is still playing, the film cuts to the recorded film, with Shosanna stating that the viewers will all die. Before Hitler can cut the projection, Shosanna tells Marcel to burn the cinema down, Marcel then throws a cigarette at the screen. After the flames appear, the audience panics and tries to escape, but as Shosanna's image laughs, Donny Donowitz and Omar Ulmer rush in and begin shooting at the crowd, from Hitler's opera box. They manage to gun down many Nazi high officials before the cinema gets destroyed by the explosion, killing everyone inside, including themselves. 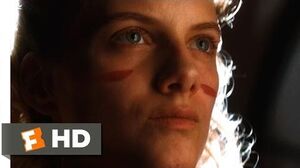 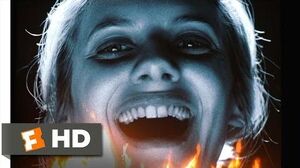