Shoukaku (Japanese: 翔鶴 "Flying Crane") was an aircraft carrier of the Imperial Japanese Navy, the lead ship of her class. Along with her sister ship Zuikaku, she took part in several key naval battles during the Pacific War, including the attack on Pearl Harbor, the Battle of the Coral Sea and the Battle of the Santa Cruz Islands before being torpedoed and sunk by an American submarine at the Battle of the Philippine Sea.

Shoukaku wears a shortened miko uniform with arm bracers and thigh boots with propellers protuding from them. Like most archer carriers, she wields a bow and wears a muneate inscribed with a kana character ("シ").

Shoukaku has long white hair with a hairband. Her flight deck is attached to her right arm. 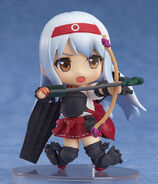 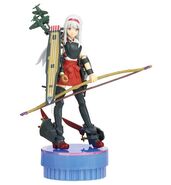 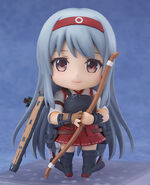 Add a photo to this gallery
Retrieved from "https://hero.fandom.com/wiki/Shoukaku?oldid=1618590"
Community content is available under CC-BY-SA unless otherwise noted.