Prevent Mana from destroying the world with the Apocalypse Virus. (both succeeded)

Brother of a Villain
Betrayed Hero
In love hero

Shu Ouma is the main male protagonist of the anime series Guilty Crown. He is a member of the military group Funeral Parlor, whose right hand holds a special power called the Power of the King, given to him by the Void Genome. However, the Genome was meant to be for Gai Tsutsugami, the leader of Funeral Parlor, who then recruits Shu to liberate Japan from GHQ. Shu is reluctant at first, but overtime he becomes the turning point in the fight against GHQ. He is also the love interest of Inori Yuzuriha.

Shu is usually seen wearing his school uniform. He has brown hair with a blond streak forming from the crown and maroon/red eyes that occasionally appear blood-red. For his time with the Undertakers, he wore their standard uniform. Since he acted as the King of his school (motivated after seeing Hare die in his arms), he wore a green coat, a scarf, a white t-shirt, black pants, and a chain. In Episode 17, he lost his right arm which was replaced with his Void in Episode 19 after injecting himself with the third Void Genome ampule. He also gained the Apocalypse Virus on the right side of his face (1st Stage of Apocalypse Virus). Shu's hair greatly resembles that his father, Kurosu. He is 17 years old and stands at 5 feet 7 inches.

In Lost Christmas, he appears as a 7 years old child with the same features are the main story, except he doesn't have his blond streak and is a cowlick instead, which may hint that his streak is dyed.

When first introduced, Shu is a rather withdrawn teenage boy who usually keeps to himself, spending most of his time surfing the net and watching Egoist videos. He is frequently rude and insensitive, largely because he never knows what to say to others. In fact, at the start of the series, he's only been able to forge "friendships" by going along with what other people say. Just about everyone calls him out for his inability to read between the lines, from Hare, his friend at school, to Kenji, a mass murderer responsible for an infamous terrorist bombing. Shu can also be rather apathetic and self-absorbed; when scolded for making a carelessly cold remark, he can only think about his own feelings that got hurt instead of feeling bad about what he said. He also has trouble making eye contact with people, saying that when he does, he gets nervous and forgets what he was going to say. There are hints that he may have some kind of disorder, as he notes that his mind might be out of step with everyone else's, though nothing concrete is ever confirmed.

Initially, Shu is rather cowardly and has a very low opinion of himself. He is initially reluctant to join Funeral Parlor, despite having the very ability that could benefit them, and even gets into some conflicting loyalty between them and GHQ. This is largely due to his resentment of Gai, whom he clashes with due to the latter's tendency to use others and "needs of the many" way of doing things. This, in turn, earns Shu contempt from people who would gladly risk their lives for Gai, particularly Argo. The two settle their differences after the Leukocyte incident, though they still disagree from time to time, particularly when it comes to anything involving Inori. Later, however, Shu is shown to actually look up to Gai, wanting to be more like him, but eventually realises he will never be him and decides to do things his own way.

After being forced to mercy kill Yahiro's younger brother, Jun, the implication of Voids sinks in for Shu i.e. he has essentially been using people, even those he calls friends, as tools. As a result, he undergoes a breakdown and becomes traumatised, which results in Gai and Ayase dismissing him, stating they never want to see him again. Only Inori retains her faith in him. After a talk with Hare, however, Shu ultimately decides to save Gai, Inori and the other members of Funeral Parlor, and begins to ask permission before using Voids. Ultimately, Shu evolves into a much more brave and sociable person, as noted by Hare, who suspects that it's thanks to the other members of Funeral Parlor.

Hare's death changes Shu dramatically. Misinformed by Yahiro over the details surrounding her death, Shu becomes a callous and emotionless person, implementing Yahiro's ranking system and taking control of the student body. Shu publicly assumes a tyrant-like persona with an iron fist, under the belief that extreme discipline will lead them to safety. He is especially harsh towards Souta, whom he blames for Hare's death, going so far as to let him fend for himself underwater. When Argo attempts to help him, Shu has him thrown into a cell for insubordination. However, in private conversations with Inori and Ayase, he realises his own actions are wrong and wonders if he'll ever be punished for them, an assumption that turns out to be true when Arisa and the other turn against him. During this time, he becomes extremely reliant on his Void powers, referring to himself as a King.

After the loss of his right arm and Void powers, Shu enters a catatonic-like, unresponsive state, dwelling on his own mistakes, as well as dealing with the betrayal of people he believed to be his friends. During this time, in a reversal of roles, Inori takes guardianship of him, protecting him from the ongoing governmental hunt for her. Inori eventually decides to let herself be captured so that Shu can remain safe, as they no longer see Shu as a threat. Afterwards, Shu comes to terms with his mistakes, assuming a calmer, more decisive persona, willing to go to any lengths to undo his wrongdoings even at great personal cost. He holds Arisa at gunpoint to lead him to Inori, injects himself with a second Void Genome, despite the great death risk and even kills Segai in cold blood, saying he will willingly soil his hands to save everyone. He also breaks from his former demeanour, manifesting his Void and shedding his closed emotional attitude. Shu was also planning on sacrificing himself to cure the Apocalypse Virus with a peace of mind, only for Inori to sacrifice herself instead, resulting in him being alive but blind.

At the start of the series Shu's only noteworthy ability were his observational skills and intelligence of which he even received a slight praise by Gai. Since joining the Funeral Parlor, he tried to learn hand-to-hand combat and weapons use by Ayase and other members, but has never shown any skill at this, relying more on his use of Voids.

Shu's main ability stems from the Void Genome, referred to by many as the "Power of the Kings". With this power Shu can draw out a person's Void: an object that is referred as a person's heart and ideas taken form. This ability is highly versatile, as each Void is unique to each person and have several different effects that can be used to deal with almost any situation. In order to use this power, Shu must look directly into the person's eyes as he draws out the Void which causes the person to lose consciousness. After Mana's first destruction, Shu's powers underwent a change, as individuals no longer collapse from having their Voids drawn out, and can even wield them like Shu.

His most powerful and used Void was Inori's, a large and powerful sword that he can wield effortlessly and can easily cut through a group of Endlaves. He can also use this to fire a thin metallic-like energy wave from the sword that can cut through most solid objects. Using this Void also appeared to enhance Shu's physical abilities greatly, allowing him to jump and move at great speeds. One characteristic of the Void Genome is that when a Void is drawn, Shu can also generate blue-energy disks that can be used as shields or as stepping stones to reach higher grounds. This ability seems available whenever he draws any Void. Later he showed the ability to combine Voids to create more powerful weapons as shown by combining Inori's and Kido's Voids. Unlike Gai, Shu has only combined Voids once which leaves it unknown if he can do this with any Void and how many he can combine.

The Genome itself is apparently bound to the user's right hand, as this is the hand where the mark of the kings is and the hand Shu uses to draw out the Voids. In episode 17, Gai severs Shu's right arm and steals the Genome, which binds itself to Gai's right arm.

In Episode 19, Shu regains his Void powers with another Void Genome ampoule - this time, it is situated in his left hand. He then draws out his own Void, which manifests into a crystallised right arm with green veins coursing through it, replacing Shu's missing right arm. With it, he can draw out and assimilate other Voids, allowing him to manifest and switch between several Voids as well as using them to their full potential. When this happens, the Void becomes black with a green lining in a similar fashion to his own Void. After defeating Gai, the original Void Genome once again bound itself to Shu, which greatly enhanced his Void's powers and allowed him to absorb the entirety of Voids, Apocalypse Virus crystals in Tokyo, effectively riding it from the disease. This Void caries an extreme drawback - while it does take Voids in, it also takes harmful effects. Most notably, it takes the Apocalypse cancer from Souta, who was previously in a terminal stage of the Apocalypse Virus. In Episode 22, his Void takes in Inori's crystallisation as he starts to reach the lethal effects of the virus. However, Inori saves him and sacrifices her life however Shu not only took in her crystallisation but also her blindness. 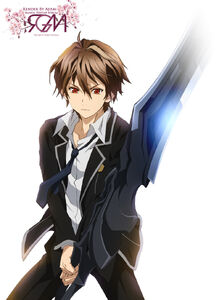 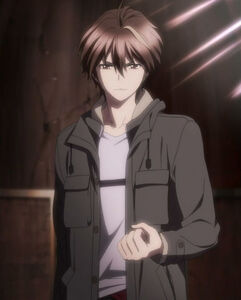 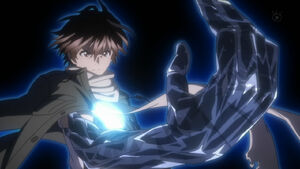 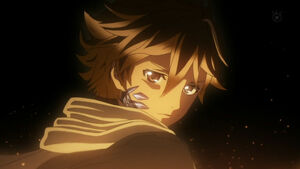 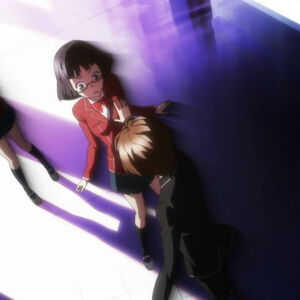 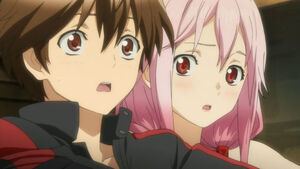 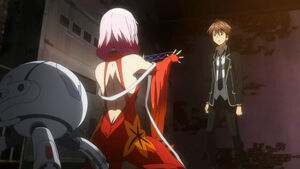 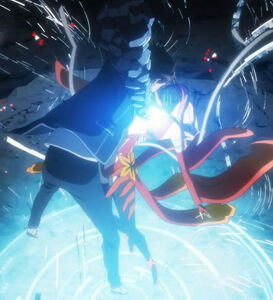 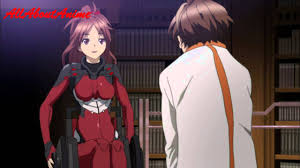 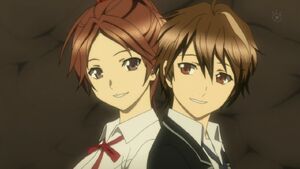 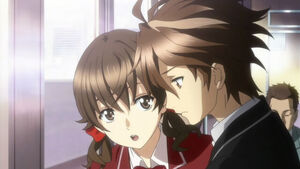 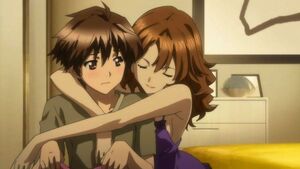 Shu with his step-mother, Haruka
Community content is available under CC-BY-SA unless otherwise noted.
Advertisement