Gain the six Kamidogu and to defeat Onaga.

Protect the Earthrealm from evil threats.

Shujinko is an Earthrealm warrior that was manipulated by Onaga into gathering the six Kamidogu. He is the main protagonist of Mortal Kombat Deception.

Quest through the Realms

Many years ago, when Shujinko was a child, he was approached by a spiritual entity that called itself Damashi. Damashi told him that it was a servant of the Elder Gods and had been sent to find a mortal with enough courage and potential to perform a quest for them. Shujinko eagerly accepted and Damashi commanded him to retrieve the Kamidogu from Earthrealm, Netherrealm, Chaosrealm, Outworld, Orderrealm, and Edenia. To help him, Damashi gave Shujinko the ability to observe and mimic the abilities of warriors he came across. His quest lasted decades and lead him throughout the realms with his talents in battle increasing greatly as he went on.

In Earthrealm, Shujinko would study briefly with the Lin Kuei and learned some of the skills of cryomancy. After going to Netherrealm, he watched the rivalry of Ashrah and Ermac develop and during his time in Chaosrelam, he helped Havik defeat a group of Seidan guardsmen, who were attempting to control the realm's water. Shujinko then went to Outworld, where he fought Baraka and his Tarkatan forces, who were about to massacre an entire city for defying Shao Kahn. Desperate to get help for the city, he went to Orderrealm and, after stopping a riot brought about by Darrius, recruited the help of Hotaru and the Seidan guardsmen. They went to Outworld and succeeded in defeating the Tarkata, bringing the city under their control.

Shujinko proceeded to go to Edenia and helped Sindel in driving off an invasion attempt by Shao Kahn. After this he found the last Kamidogu and went back to the Nexus, the place he'd been using to travel between realms, where he planned to present them to the Elder Gods. However Onaga appeared and revealed that he was Damashi, then forced Shujinko to flee and took the Kamidogu for himself. The Dragon King proceeded to head to Outworld so he could reclaim his throne and then enact his plan to use the Kamidogu to remake the realms in his own image.

Shujinko realized the threat he had unwittingly helped to unleash, swearing to stop Onaga after being decieved, and though his quest had been false, it had allowed him to become one of the strongest warriors throughout the realms. He headed to Outworld and succeeded in bringing a number of powerful warriors to one location, Shujinko defeated Onaga, then used the ability Onaga had given him so many years ago to absorb their fighting essences, granting him enormous power. With this new supplement of power, Shujinko shattered the Kamidogu and defeated Onaga, allowing Nightwolf to trap his soul within the Netherrealm.

Shujinko became known as the hero of Outworld, but still felt some guilt since he brought back Onaga in the first place and didn't think he was worthy of admiration. Soon after this, Kitana asked him to meet her at Shao Kahn's fortress, telling him her forces had flushed out the remnants of the emperor's empire. However Shujinko realized that when he and Kitana went their separate ways after Onaga's defeat, she went to Earthrealm to help Liu Kang's ghost. He decided that either she'd gone on the quest and returned early or the invitation wasn't from her at all. Shujinko refused to be deceived as he had with Onaga and decided to go uncover this possible plot, so as to become worthy of being admired by Outworld's people. As it turned out, the invitation had been from Mileena at the command of Shao Kahn, whom he fought, but allowed himself to be defeated so he could be captured.

Later Taven came across Shujinko in the emperor's dungeon and freed him. He explained he'd allowed himself to be captured in order to get close to his enemies, then take on Shang Tsung, Shao Kahn, Quan Chi, and Onaga on his own. Taven was skeptical of this, but Shujinko disappeared, leaving the demigod to regard him as a fool.

In his ending, Shujinko defeated Blaze allowing him to absorb the strength of every fighter, driving him mad with power. He destroyed all the other fighters and challenged the Elder Gods for control of the realms.

Shujinko is a talented fighter, having been trained by Bo' Rai Cho, the same master who trained Liu Kang and Kung Lao. But his greatest ability is the one given to him by Damashi, the power to copy the powers of any fighter he encounters. Shujinko has done this to Scorpion, Sub-Zero, Liu Kang, Sindel, and many others and his journeys through the realms has likely made him very powerful and his older status does not seem to hamper his fighting skills. 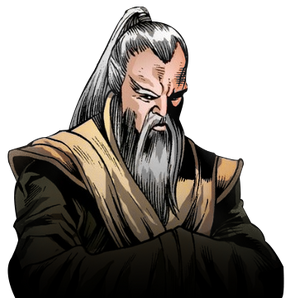 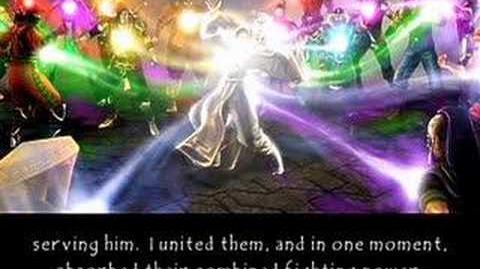