Heroes Wiki
Register
Don't have an account?
Sign In
Advertisement
in: The King of Fighters Heroes, Male, Video Game Heroes,
and 35 more

Keep his powers under control.

Shun'ei is one of the main protagonists in The King of Fighters franchise and the protagonist of the same name saga.

He is voiced by Takashi Ōhara.

Shun'ei is a manipulator of illusions. Due to his mysterious powers, he was abandoned at a young age by his parents and was raised as a disciple of Tung Fu Rue. His home is near the Sichuan region where Mian lives and works. Through his training, Shun'ei learned how to control his powers. As Tung's last disciple, he sets out to challenge other fighters from all over the world with his close friend Meitenkun.

It is revealed that Shun'ei has part of Verse's power on his left-half, one of the two creatures, along with an unknown blue creature, created from the result of Ash Crimson changing time to erase himself and Saiki; their powers are somehow implanted into Shun'ei in the new timeline.

After Verse's defeat, Shun'ei is advised by Kyo to continue his training to keep his powers under control. Shun'ei agrees and vows to train harder.

Shun'ei is a nice and reasonable person due to Tung Fu Rue's kindly teachings. He fondly calls his master "Grandpa". He admits his cursed powers may endanger anyone near him and is worried about it. Due to his benevolent nature, he intends to continue his training to use his powers for good.

Shun'ei's power has a symbiotic relationship with Verse.

Shun'ei makes use of a personal fighting style that involves telekinetic control of his energy fists, mixed in with control via Hakkyouseiken via Tung Fu Rue's teachings. Most of his attacks are somewhat reminiscent to a personal form of Chinese boxing.

Shun'ei is the only known character to have two air dashes, which act as airborne special moves. 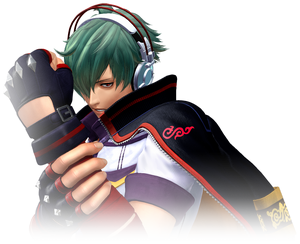