Defeat Satan, Prevent Rin from going out of control

Tragic Exorcist, Mentor, Special Agent
Shura Kirigakure is a supporting protagonist in the manga/anime series Blue Exorcist. She is an Upper-First class Exorcist and Rin Okumura's mentor. She trained under the guidance of Shiro Fujimoto to obtain the title Meister as a Knight. She officially works as an Inspector for the Vatican, but has infiltrated True Cross Academy, first as a student under the name Yamada, and later as a teacher for the Exwires.

Shura has long hot pink hair with yellow ends that resemble flames which she keeps up in a high ponytail, green eyes (pink in the anime) and full lips. She has a curvaceous figure with large breasts which Rin considers larger than Shiemi's and marking on her chest and abdomen which act as seals for various items.

She is usually seen wearing a very revealing bikini top, along with shorts and sometimes with stockings as the bottom part of her outfit or also wearing a denim jacket. After she is assigned to become a teacher at the Exorcist Cram School, Shura starts wearing an unbuttoned school jacket and a tie. She also carries a license that states her name and position, as well as a key with coat of arms on it, which symbolizes her position.

When she first appears as Yamada, Shura appears to be a very quiet and socially-withdrawn woman, preferring to spend time playing on her PSP instead of paying attention to the lesson. She does not get along with the others, refusing to help them during the Ghoul incident. In truth, this personality is just a facade- being an Exorcist already, there is no need for her to pay attention to lessons.

Shura has a rather laid-back personality and uses slang; such as using yer instead of your, you're, or you. She is also noted to be rather blunt, speaking freely about sensitive topics, as well as not being hesitant in pointing out others' flaws. Even with her superiors, she is not afraid to challenge them, which on a few occasions resulted in a physical conflict. Like Rin, she often slacks off, and would rather drink and let others do work. Nevertheless, she is a very competent Exorcist and, when needed, Shura can be serious and focused, as seen when she duels Amaimon and being able to depict the fact that Rin's flames take over him because of his fear.

Despite Shura's fierce loyalty to Shiro Fujimoto, she isn't above insulting him at times; this is shown when she casually calls him a coward for sacrificing his life to save Rin, something that immediately makes Rin angry as he takes any insult against his adopted father very seriously. She even contemplates killing Rin just for being connected to Satan, despite the promise she made to Shiro to mentor him, though she ultimately reconsiders after seeing Rin's resolve.

Shura seems to be rather self-conscious about her true age, as she states to everyone that she is 18 years old, when Yukio has alluded to the fact that she is 26 years old.

After the incident in Aomori, she becomes more open about her feelings, such as threatening Mephisto should Rin and Yukio get hurt because of him, which surprises even her. 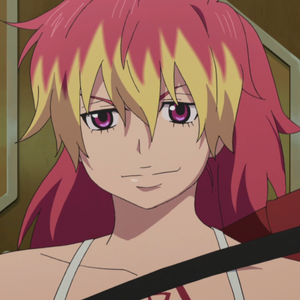 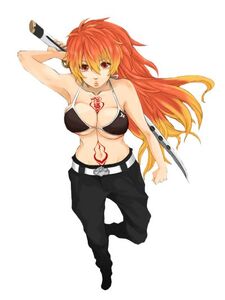 Retrieved from "https://hero.fandom.com/wiki/Shura_Kirigakure?oldid=2192245"
Community content is available under CC-BY-SA unless otherwise noted.