Shuri, also known as the Black Panther, is a fictional character in the Marvel Comics Universe. Originally appearing in a supporting capacity as the younger sister of T'Challa, the character went on to adopt the Black Panther identity and star in the series of the same name.

Along with her role in the comics, Shuri has made appearances in related television series and video games. Letitia Wright portrays the character in the Marvel Cinematic Universe.

The Princess of Wakanda, Shuri is the sister of Black Panther, and an heiress to the throne of Wakanda. She is the youngest child of T'Chaka, his only daughter and only biological child with Queen Ramonda, his third wife. From a very young age, Shuri has wanted to become the first woman to become the Black Panther. Against her mother's wishes, she broke into the arena to challenge her uncle S'yan for the title of Black Panther, but was unable to reach the ring before another fighter defeated S'yan and claimed the title. When the victor was unmasked, it was none other than Shuri's older brother T'Challa.

Shuri had difficulty coping after her first kill, until T'Challa promised he would personally train her in hand-to-hand combat so that she could take his place as Black Panther should a day come when she needed to lead Wakanda. Despite being particularly headstrong, the will to become the Black Panther drove Shuri to become a gifted fighter.

Shuri, as queen of Wakanda, was involved in treaty negotiations with Namor, who offered to end the bloodshed between their two nations in exchange for refuge in Wakanda whenever he desired. This same treaty was first presented to T'Challa, who originally rejected it. Like her brother, Shuri also declined Namor's offer stating that the conflict between the two nations was no ordinary war, and that the fate of both Wakanda or Atlantis hung in the balance; in the end, one of them would face total destruction.

With the incursions threatening the existence of the universe and the Earth, Namor formed a Cabal to do what the Illuminati were unable to bring themselves to do, destroy incoming colliding alternate Earths. The Cabal took over Wakanda and turned it into their base of operations, razing the Golden City and slaughtering its citizens. In an attempt to disrupt the Cabal's stolen arsenal of Antimatter Injection Systems, Shuri and T'Challa found themselves cornered by Proxima Midnight of the Cabal. Shuri remained behind to confront their enemies while T'Challa teleported away, at his sister's request.

Shuri was defeated by the Cabal's forces and trapped within a construct of amber similar to Thane's, a construct which left her in a state of stasis known as "living death." As Black Panther strugged to find a way to bring his sister's body back to life, Shuri's sould made its way to the Djalia, a transcendent plane that represented Wakanda's collective memory.

During her time in the Djalia, Shuri trained with and learned from a griot spirit that had taken the form of Ramonda. T'Challa eventually resurrected Shuri by retrieving her soul with the help of Manifold. Now imbued with wisdom and new powers, Shuri confronted Aneka, an ex-Dora Milaje and one of the leaders of a rebellious Dora Milaje group. Shuri seemingly convinced Aneka and Ayo to stand with the Black Panther in the wake of the invasion of another rebellion led by Tetu, which marched towards the Golden City.

Djalia Enhancements: Shuri returned from her stay at the Djalia changed, having been imbued with supernatural powers from the teachings of a griot. 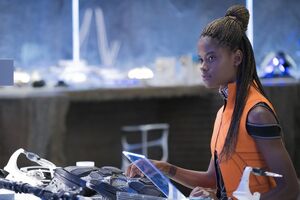 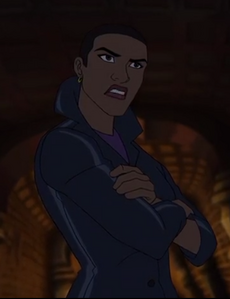 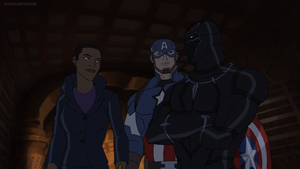