Shyvana, also known as The Half-Dragon, is a heroic playable champion in the multiplayer online battle arena game, League of Legends.

A dragon altered by the magic of her mage stepfather, Shyvana had the ability to transform between her humanoid and draconic forms at will. When her birth mother Yvva killed him, Shyvana ran away from her and eventually saved the life of the prince of Demacia, Jarvan IV. Shyvana united with the Demacian army to defeat Yvva and secured a place in the city, but she feared that her dragon heritage would make her an outcast.

The 86th champion added to the game, Shyvana was released on November 1st, 2011. She is often played as a jungler.

She is voiced by Karen Strassman, who also voiced Fiora in the same game, as well as Anna and Miyuki Takara.

Long ago, a dragon known as Yvva guarded her clutch of eggs from thieves and other dragons. One of the eggs was taken by a mage, whose magic caused it to hatch into a blue-skinned infant. The mage refused to abandon her and named her Shyvana. As she grew up, she found it hard to fit in with the other children as she was the only one could transform into a dragon. However, Yvva had a connection with Shyvana, and eventually flew off to find her.

Shyvana watched as Yvva arrived, terrorizing the humans below her and killing Shyvana's adopted father by burning him. She then relentlessly chased after Shyvana, but she ran as far as she could from her mother until she smelled blood. She eventually found a comatose warrior, none other than Prince Jarvan IV, so she rushed him back to his hometown of Demacia to save him. While the Demacians were suspicious of her violet skin, they still let her live alongside them.

But Yvva was still on the search for her daughter, and eventually found Demacia. By the time Yvva arrived, Jarvan IV had recovered enough. Shyvana wanted to run away as she didn't want innocents to die because of her, but Jarvan told her since she saved his life, she should fight alongside him. She accepted, and both of them combined their forces to fend Yvva off. Shyvana transformed into her draconic form, wrestling Yvva out of the sky and breaking her neck on the flagstones. With Yvva killed, Jarvan offered her a place in his ranks and invited her to defend Demacia.

Shyvana eventually joined the Dragonguard, where she would defend Demacia from hostile dragons. Their general Lieutenant Jerik hated her at first, but began to warm up to her after seeing her fight Yvva, and considered her a dear friend. But with Demacia facing civil wars due to the growing hatred towards magic, Shyvana became anxious about what would happen to her if her full capabilities were more known.

Tragically, Shyvana's worst fears came true as she was apprehended by the Mageseekers and locked in a Mageseeker vault. She was eventually found by the Sentinels of Light. Shauna Vayne, with her natural hatred towards magic users, told the sentinels that Shyvana was more monstrous than she looked. Shyvana ranted about how she now hated Demacia after facing betrayal from the kingdom she swore loyalty to, since they imprison magic users with no tolerance nor mercy. She was then possessed by the Ruined King (represented by the Ruined Shyvana skin), who gave her a new ambition to destroy Demacia for their ignorance. She turned into her ruined dragon form to fight Vayne, Senna, Lucian and Gwen, but Shyvana was eventually defeated and turned back into her human form. Vayne attempted to kill her but Senna stopped her. Vayne told her that Shyvana was a monster but Senna replied that Viego was their real enemy.

Shyvana is known for her loyalty and selflessness, taking Jarvan IV back to his kingdom despite only just meeting him and wishing to run away after blaming herself for putting lives in danger. From a young age, she always feared that she would not fit in but she eventually found solace with Demacians who accepted her as not only a citizen, but a friend and valuable ally. She swore loyalty to Demacia and was proud to do so, even defending her faith in Demacia if Aurelion Sol mocks her for it.

Sadly, her faith in Demacia would become shattered when she was imprisoned by the Mageseekers, recognizing Demacia's xenophobia and expressing her hatred towards the kingdom that she swore loyalty to only to betray her. While possessed by Viego, part of her still has agency as her goal to destroy Demacia was not only from possession, but also exacerbated by her own feelings of hurt when they gossiped about her, so she became a monster because that was what they thought about her.

Shyvana as she appears in Legends of Runeterra.

Shyvana under the possession of the Ruined King. 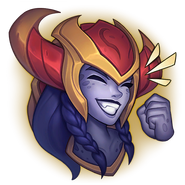 An emote of Shyvana.