Scooby-Doo and the Ghoul School

Immunity to Sunlight (however she is a vampire)

Sibella is a vampire and the main heroine from Scooby Doo and the Ghoul School. She is Dracula's daughter, and implied to be the most powerful of the five Grimwood girls - meaning unlike many so-called 'monsters' of Scooby-Doo series who are revealed to be humans in disguise, Sibella is a genuine one.

She was voiced by famous voice actress Susan Blu.

Sibella is roughly twelve-years-old and is the only vampire at Miss Grimwood's Finishing School for Girls, however she enjoys rough sports as much as the other girls. She is very down-to-earth, making her the easiest of the ghouls Shaggy and Scooby warmed up to. She often makes puns on words related to vampires, such as "fang-tastic", however unlike her father or many other typical vampires, she does not speak with a Romanian accent.

She is often the one who runs errands, and is always happy to help. Sibella is close to both Phantasma and Tanis and has a friendly rivalry with Winnie Werewolf. Out of all five girls, she seems to be the ghoul who is most fond of Shaggy, Scooby, and Scrappy.

She has long purple hair, light purple skin, red lips, and green eyes, and her outfit consists of a purple dress with a slit, red high-heeled shoes, and a red belt. In terms of height, she is the second tallest of the Grimwood girls tied with Phantasma, leaving only Elsa Frankensteen being taller than her.

Despite her seductive tone and figure, she is not a femme fatale.

Upon her introduction, it becomes obvious that Sibella has the ability to transform into a bat, a common trait of many vampires.

It has been shown that sunlight has no effect on her in contrast to most vampires, including her father, as he still has to wait until the sun goes down before he can visit her, as it still proves to be lethal to him. She seems to be very creative with sewing as evidenced by the robes she makes for her father and Matches.

Out of all five of the girls, Sibella is possibly the most powerful, as Revolta, the main antagonist claims that she is strong-willed while in the process of hypnotizing her, as she is the only to resist her spell.

Like typical vampires, garlic is a weakness to her.

Sibella is the first of the five girls Shaggy, Scooby, and Scrappy meet when they arrive at Grimwood's Finishing School for Girls when they arrive as the new gym teachers. At first, Shaggy and Scooby are frightened to learn that she is a vampire and that all the students are the daughters of legendary monsters. Eventually though, Shaggy and Scooby begin to warm up to Sibella and the rest of the girls, seeing that while they are indeed monsters, they are actually very friendly.

During one of the routines Shaggy takes the girls on, the gang becomes hungry, so Sibella goes out using a Transylvanian dollar to buy Shaggy, Scooby, and the rest of the girls a pizza, which she bought with "everything on it" ("except garlic, of course").

Eventually, Miss Grimwood and Colonel Calloway of the adjacent Calloway Military School for Boys agree to hold a volleyball game between the two schools, to which the Calloway Cadets always win each year. Shaggy, Scooby, and Scrappy quickly train the girls for the match after learning that they have only one hour before the game is set to begin.

The girls have the upper hand at first, as Sibella is able to transform into a bat and hit high balls. However around the middle of the game, the cadets go on to use a remote controlled ball to cheat, tangle Sibella in her own hair, and nearly win the game, however it later backfires when Scooby accidentally shoots the two cadets controlling the ball with ketchup and unintentionally swallows the remote, which fortuitously helps the girls to win the game.

Soon afterwards, the girls begin decorating the school for the upcoming Halloween open house party, to which all the girls' fathers, including Siberia's own father, Count Dracula, will be visiting. Her gift to her father was a "bat robe" (a pun on a bathrobe) which she made herself, as well as another fire-proof one for Matches. When the party ends however, her father, as well as the other girls' fathers warn Shaggy to take good care of the girls or else they will face severe consequences.

Later, Shaggy is hypnotized by one of Revolta's spider bats and is told to take the girls to Barren Bog, where the Grime Creeper, Revolta's assistant has set up a trap in the form of a shack to capture the girls. Upon arrival, Winnie challenges Sibella to a race in the bog, but is easily captured when she runs into the shack after getting lost. Eventually, all the other girls are captured and hypnotized except for Sibella, who learns about the trap and tries to flee and warn Shaggy, Scooby, and Scrappy about the plan. Sibella attempts to fight back, being the only girl who shows resistance to Revolta's hypnotism spell, but is soon overpowered by her spider bats and captured. Although she was too late to escape, she was able to warn Shaggy, Scooby, Scrappy, Matches, and Calloway Cadets in time before the girls were sent to Revoltas hideout. Shaggy, Scooby, Scrappy, and Matches decide to head out to rescue the girls, but the Calloway Cadets refuse and retreat back to their school.

Meanwhile, Revolta manipulated Sibella and the girls into doing her bidding before she would "revoltize" them at midnight, a process that would turn the girls, including Sibella, evil forever. When the girls were placed under the potion, Sibella was the first to react to the potion, and was also the second-to-last girl saved from becoming evil when Tanis pulled the headpiece off her, although she initially showed minor signs of being revoltized. After the girls and the rescuers interrupt Revolta and her spell process, they ultimately overpower her and ruined her spell, causing a chain reaction of explosions. As the castle began to explode, Shaggy, Sibella, and the rest of the gang were rescued just in time by the Calloway Cadets. Revolta and the Grime Creeper attempt to pursue them and recapture the girls, but fail to after a spark from the explosion destroyed their brooms.

After the rescue is a success, Shaggy, Scooby, Scrappy, Miss Grimwood, Sibella, Colonel Calloway, and all the girls and Calloway cadets celebrate their victory by throwing a party. Sibella is seen dancing with her father, whom is grateful that Shaggy and Scooby kept their promise by keeping his daughter and the other girls safe out of harm's way. Shaggy and Scooby, whom are now officially use to being around monsters attempt to stay for the rest of the semester and/or year, but soon change their mind and beat a hasty retreat after Miss Grimwood introduces them to three more monster girls belonging to an alien, the Creature of the Black Lagoon, and Godzilla.

Sibella and the other girls are last seen waving good-bye to Shaggy, Scooby, and Scrappy when they left the school. 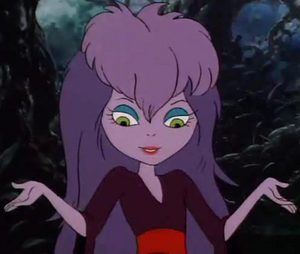 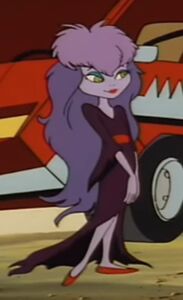 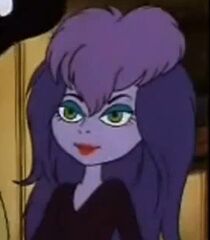 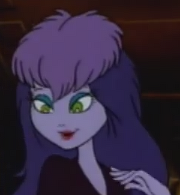 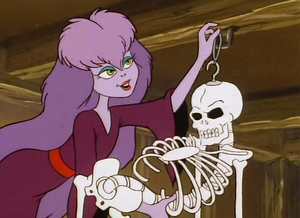 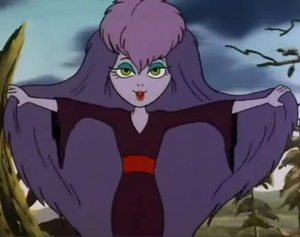 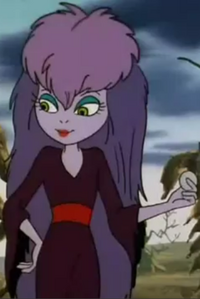 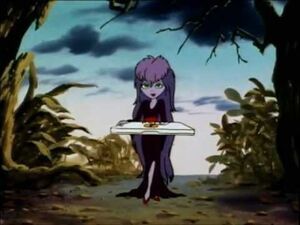 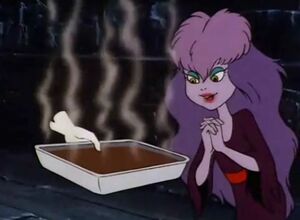 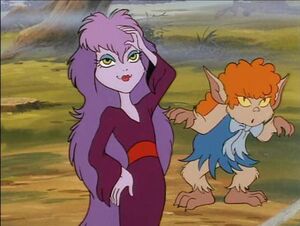