No information
Side Swipe is a major character in Transformers Armada. A member of Cybertron Division 10, he is a young, instinctive Autobot, that gets easily attached to commanders. He was voiced by Sam Vincent, who would go onto voice Coby Hansen in sequel series Cybertron.

On Cybertron, Side Swipe had once been saved from a rope trap by Blurr, and in Past, transferred himself to Earth out of admiration. Blurr put him with Hot Shot, and the two headed off to do some training. However, Wheeljack, Hot Shot's former protege, arrived soon after, intent on revenge, and Side Swipe tried and failed to defend his new friend. In Past II, he later tried again, only to be captured and chained up in an abandoned oil refinery. The battle between Hot Shot and Wheeljack set the place ablaze, and the terrified Side Swipe blubbered a lot,was rescued by Hot Shot.  Back at the base, Side Swipe tried to give his commander a hug for saving his life. From then on, he called Hot Shot "Bro".

In Sacrifice, Side Swipe was among the Autobots that battled Starscream and Tidal Wave when they attacked a rain forest. However, they learned too late that Megatron had shifted strategies halfway through the battle, and had infiltrated their base. The Autobots warped back, finding the place completely trashed and the children tucked away in an air vent. Side Swipe was tasked with guarding the kids while the rest of the group rushed to Smokescreen, who had been left to guard the Mini-Cons. After Smokescreen was seemingly killed while Megatron retreated with the Requiem Blaster. Side Swipe was amongst those who saluted their fallen friend after he collapsed in Prime's arms.

When they found Smokescreen was barely alive in Regeneration, Red Alert looked after him in the repair bay. To keep Hot Shot's mind off his friend's plight, Side Swipe sparred with him. When a proximity alarm sounded, Hot Shot had Side Swipe come along with him to deal with the Decepticons, on their own. They came across Starscream, who had just defected, being chased down by Tidal Wave. Eager to avenge Smokescreen, Hot Shot took on the bigger of the two Decepticons while Side Swipe battled Starscream. The young 'bots were in over their heads until Jet Optimus joined in and received the Star Saber, handed over willingly by Starscream. Starscream was taken back to Autobot headquarters, and the Autobots agreed to take him into their ranks. Smokescreen then returned to active duty, having been rebuilt into a new body. Side Swipe decoded data provided by Starscream, to open a warp gate to the Moon.

In Rescue, on the Moon, the Autobots stormed the Decepticon camp. During the battle in Megatron's throne room, Side Swipe, eager to prove his mettle, rushed Tidal Wave. When his attacks proved completely ineffective against the titan, Scavenger suggested Side Swipe pick on someone more his size. The battle then spread throughout the Decepticons' base, until the Decepticon-held Mini-Cons were located. Side Swipe was tasked with overlooking the Mini-Cons' evacuation back to the Autobots' headquarters, so they would warp there in an orderly fashion. He and the rest of the Autobots followed them shortly afterwards. To be added 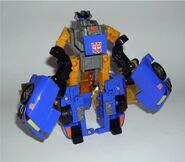