Combat Instructor of the Autobots
Second in command after Ironhide's death

Make Optimus Prime become alive with The Matrix of Leadership. (Second Film)
Destroy the Pillars and kill Sentinel Prime for his betrayal. (Third Film) (All Succeeded)

Speedster
Scout
Warrior
Freedom Fighter
Protector of Innocence
Sideswipe is a major protagonist in the Transformers Cinematic Universe. He is the one of the two secondary tritagonists (alongside Robert Epps) in Transformers: Revenge of the Fallen and the one of the two tritagonists (alongside William Lennox) in it's sequel Transformers: Dark of the Moon. He transforms into a Chevrolet Corvette Stingray Concept, and is armed with two retractable Cybertanium arm blades on each of his wrists in robot mode, along with a pair of guns and a machine gun on his back.

His Hasbro battle bio states that he is 15 ft. tall and that he is a master in almost every form of martial arts on Cybertron.

Sideswipe was built to fight. He is sleek, fast, and accomplished in battle. Focusing on his enemies with absolute attention, his blades are a shining blur as he leaps through the air, twisting to avoid enemy fire. Converting to his vehicle to drive at blazing speed, he uses every trick in the book to get close to his opponent, and put his powerful swords to work.

Sideswipe is relatively serious, and always keen to prove his skill in combat on the battlefield.

After joining the Autobots, Sideswipe was trained by Ironhide in the art of war. After his training was complete, he became the protector of a settlement of displaced Autobots. This settlement was found by Demolishor, who slaughtered them. Sideswipe was ashamed, not only over having failed to protect his charges, but also because he had lived to tell the tale.

Sideswipe was summoned to Earth by Optimus Prime's message, arriving with the Wreckers on their ship, the Xantium. Sideswipe proved a loose cannon as he continued his vendetta against Demolishor when the Decepticon turned up in Montevideo, Uruguay. Showing no regard for humans in pursuing his quarry, Sideswipe reached Ezeiza International Airport, where his recklessness caught up with him as Ironhide arrived on the scene to rein him in. The younger Autobot was openly insubordinate towards Ironhide, warning him not to get in the way. The old veteran had  to serve as damage control during Sideswipe's singleminded pursuit into the city of Buenos Aires. Ultimately more reinforcements from NEST arrived, and Demolishor fled the scene. In the aftermath, Sideswipe saw the fear and mistrust the humans regarded him with because of his violent actions. Understanding this, he was forced to admit that Ironhide was correct.

Soon after, Demolisher had been sighted in Shanghai, China, and Sideswipe headed there with the others, although, perhaps taking Ironhide's advise to heart, he would let Ironhide and Optimus defeat the Decepticon.

Note: this comic strip functions also funtions as a prequel to Revenge of the Fallen, which does not follow the continuity of the IDW comics.

Sideswipe first appears in the chase in Shanghai, pursuing the Decepticon Sideways. Using his wheeled feet to menuvere, Sideswipe somersaulted over him while shooting at him, then threw one of his arm blades into the front of Sideways' vehicle mode. As he landed, Sideswipe reattached the blade (which was still embedded in Sideways) and forced it lengthwise down Sideways' body, cutting him in half. He was also seen in the fight against the Decepticons after Optimus Prime was killed by Megatron as Bumblebee and the Twins escaped with Sam. Sideswipe was surrounded by the human military and forced to go back to the Autobot base alongside Ironhide, Ratchet, Arcee and Jolt. They arrived in Egypt and fought against many Decepticons and watched as Optimus Prime was resurrected. Sideswipe was brushed aside by the Fallen when he teleported in front of them.

Sideswipe returns in Dark of the Moon as one of the main Autobots. He accompanied Bumblebee, Que and Dino when they investigated a nuclear facility in the Middle East. Later he joined Dino and Bumblebee in accompanying the humans to find out more about the Space Race. Sideswipe helped Bumblebee and Dino fight the three Dreads on the highway, who are after Sentinel Prime, using his vehicle weapons mode to shoot at Hatchet. He then helped Ironhide finish off Crowbar and Crankcase in a Mexican Standoff as Sideswipe called it. Sideswipe was expelled from Earth along with the other Autobots and was thought to have perished when Starscream destroyed the Xanthium. He participated in the final battle in Chicago. He was captured by the Decepticons and witnessed the death of Que. He almost shared Que's fate but escapes after Wheelie and Brains crash the Decepticon ship. He helps Bumblebee and Ratchet fire at incoming Decepticons, and briefly fights Sentinel Prime alongside them. He is among the surviving Autobots at the end of the film.

Lockdown appears and enters into battle with Optimus. As Optimus traps him using a factory chain, Lockdown tosses a grenade and pulls Cade, Tessa and Shane to safety. Optimus scans a white truck, changing his vehicle form, and leads them to Monument Valley. Here the remaining Autobots gather, including recruits, Drift, Hound & Crosshairs. Bumblebee has been leading the group is Optimus absense. Optimus learns of, and mourns, the deaths of Ratchet, Flash & Sideswipe. 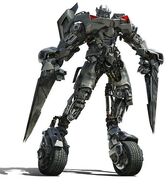 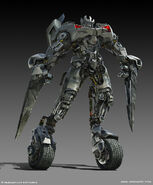 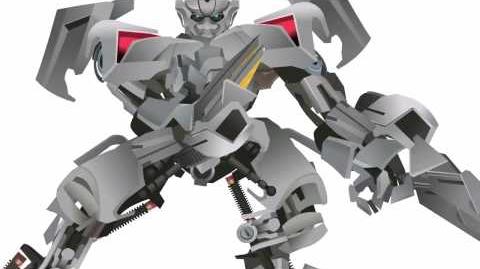