Help his master Chin and friends.

Protect Athena and Bao.
Protect the world from evil threats.

Sie Kensou is a character who first appeared in the SNK video game Psycho Soldier. He appears in The King of Fighters series as an active member of the Psycho Soldiers Team. Ever since his first appearance, he has always served as a comic relief character. At one point, developers described his psychic powers being similar to Koichi's powers in Babel II. His official nickname is The Young Rising Dragon.

He is one of the young disciples of Chin Gentsai who wields psychic powers - dubbed by SNK as Psycho Powers. Both he and Athena are trained by Chin to prepare for "the worst case scenario of oncoming evil" and use the tournaments as a method of training for such an event. Plans go awry when Kensou loses his powers in The King of Fighters '99 yet saves Athena with a previously unknown latent energy.

It is later revealed to be the Dragon Spirit (龍の気, Ryū no ki), a power he somehow shares with younger teammate, Bao. He regains his powers and masters this newer power in The King of Fighters XI, much to the satisfaction of former NESTS member, Ron. The deeper meaning of the Dragon Spirit's importance has yet to be revealed. It's probable that the Dragon Spirit is a reference to Kensou's ability to morph into a dragon from Psycho Soldier.

Athena: Awakening from the Ordinary Life

Kensou remains relatively the same as his other incarnations. The main difference from this Kensou is that he doesn't exhibit psychic powers during the majority of the story. He declares himself to be "Athena's knight" and often rushes to her aid when she is in danger. He recklessly runs into one of her teleportations and joins her search in Tantauls' headquarters. While she is battling the Tantauls system, he temporarily shields her by using his previously latent psychic powers. During the ending, he comforts her brooding by trying to not over think things and repeats some of his kenpo teacher's advice. He also tries to confess his feelings for her but is interrupted when Athena spots a healthy Rika.

Goofy, outgoing and jovial, Kensou wants to live his young years to their fullest. He has a crush on Athena, but she chooses to ignore it and when every time he gathers the courage to confess his feelings to her, he is often cut off or interrupted. He sometimes gets too excited over trivial events, such as mistaking Chin for cheating on his wife (his master was really talking to Kula Diamond over the phone). He is sometimes known to be lazy as he shows his dislike for training. 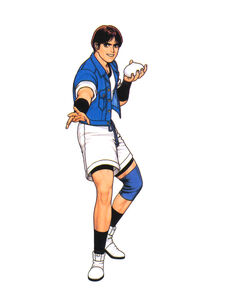 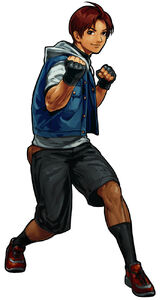 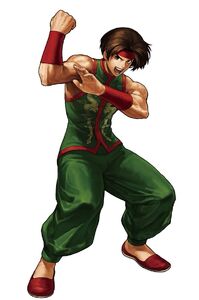 Kensou in The King of Fighters XIII

Retrieved from "https://hero.fandom.com/wiki/Sie_Kensou?oldid=2130635"
Community content is available under CC-BY-SA unless otherwise noted.