Save someone of his own volition (succeeded).
Have a second duel with Lancer of Red (succeeded posthumously).

Siegfried, also known as Saber of Black, was a major supporting character in the light novel, manga and anime series Fate/Apocrypha. Despite his demise early in the story, Siegfried still played a major role posthumously. Since his introduction in the aforementioned series, Siegfried has made other appearances in the Fate franchise. He is a playable servant of Ritsuka Fujimaru in the turn-based tactical RPG Fate/Grand Order. In the story of Grand Order, Siegfried plays a supporting role in Fate/Grand Order: Observer on Timeless Temple, appearing as a major character in the first chapter Orleans: The Wicked Dragon Hundred Years' War and a minor character in the final chapter Salomon: The Grand Time Temple. He also appears in the tower-defense game Capsule Servant as a playable servant.

In life, Siegfried was a legendary hero of the Netherlands responsible for slaying the evil dragon Fafnir with the Holy Word Balmung. After his defeat of the dragon, he married Princess Kriemhild of Burgundy and performed many deeds of valor for the kingdom. Siegfried's generous nature eventually led to his downfall when his brother-in-law the King of Burgundy sought his assistance in earning the affection of Brünnhilde, the Queen of Iceland.

Naturally, Siegfried obliged the King and helped him seduce the Queen of Iceland. After the trickery, the King of Burgundy married Brünnhilde. Knowledge of the trickery soon reached Brünnhilde, whose honor and pride was greatly wounded by the deceit, and inescapable conflict arose between Brünnhilde and Siegfried's wife Kriemhild. Siegfried, believing he was the root cause of the problem, arranged for his own death in an attempt to sooth the inevitable chaos.

Siegfried, the undefeated hero, was stabbed in the back by his closest confidante Hagen. The hero became a martyr who had lost his life at the hand of trickery and treachery. Siegfried's deeds in life were enough to earn him the right to reincarnate as a Heroic Spirit.

In the anime adaption of Fate/Apocrypha, Siegfried was voiced by Junichi Suwabe in Japanese and Ben Pronsky in English. In the Fate franchise, Suwabe also voices EMIYA. Outside of the Fate franchise, Suwabe has also voiced Eraser Head in My Hero Academia, Leone Abbacchio in JoJo's Bizarre Adventure: Golden Wind, and Greed in the 2003 Fullmetal Alchemist series. Pronsky has also voiced Rodimus Prime in Transformers: Combiner Wars.

Siegfried was a very large man, standing at 6'2" tall and weighing 80kg. His body was slender and very well toned, and his exposed skin was dyed brown with the blood of a dragon. His eyes had a greenish grey color to them, and his silver-grey hair was exceptionally long and unkempt.

Most of his body was covered in a black bodysuit of some kind which had red markings across it. Over the top of this bodysuit, Siegfried wore several pieces of armor plating. This armor included gauntlets, boots, and pauldrons. Saber of Black carried the phantasmal sword Balmung's scabbard on his back, which is where he would sheathe the sword when not in combat.

During the Great Holy Grail War, Siegfried seemed perfectly willing to obey his cowardly master Gordes Musik Yggdmillennia. He obliged his master's command to not reveal his name to his allies. Siegfried seems to enjoy the thrill of battle and the idea of a worthy opponent. He thoroughly enjoyed his duel with Lancer of Red and seemed eager to meet him in battle once again.

Siegfried is completely selfless. In life, he aided those in need without hesitation and with no ulterior motive. When he believed he could protect his loved ones form anguish, Siegfried threw away his own life without hesitation. During the Great Holy Grail War Siegfried realized that his true wish was to save someone on his own volition instead of being asked to. To this end, he gave up his own life to save the homunculus Sieg despite only just meeting the boy.

Character concept sheet of Siegfried for the anime adaption of Fate/Apocrypha. 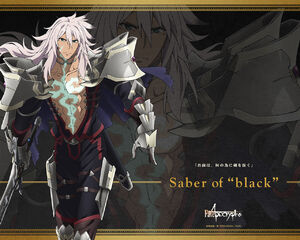 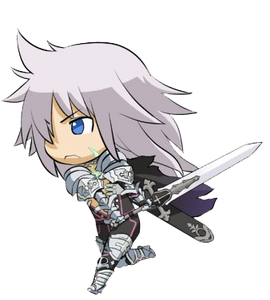 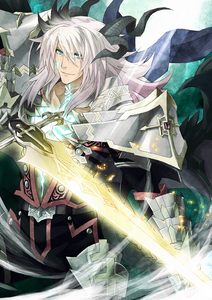