Sierra (Father of the Pride)

Sierra is the tritagonist of Father of the Pride. She is Larry and Kate's daughter, Hunter's older sister, and Sarmoti's granddaughter.

She is voiced by Danielle Harris, who also voiced Debbie Thornberry.

Sierra is Larry and Kate's daughter who is short-tempered, irritable, and going through the toughest teenage years and is usually taking her frustration out on her family.

Sierra is a stereotypical rebellious, sassy, feisty, sharp-tongued, sarcastic teenage girl and is often teasing Hunter and arguing with him and complains a lot. She enjoys going out and loves shopping, fashion, and the latest stuff, but hates doing chores, contrive things, and going by the rules. Sierra also likes rock music.

Despite her somewhat argumentative nature towards her parents, she deeply loves them. Sometimes, she teases and has disagreements with Hunter. She never really seems to interact much with Hunter other than being irritated by him and reprimanding him. However, she is seen playing a video game with him in "The Siegfried and Roy Fantasy Experience Movie." She is also sometimes asked to babysit Hunter, which she is often reluctant. She is seldom playful or in a good mood, especially with her brother.

She can sometimes be a bit odd, such as when she stated in "And the Revolution Continues" she no longer commits "rodent hate crimes", even though catching a mouse was simply following her predatory hunting instincts. Overall, Sierra is truly a good, loyal, kind-hearted girl.

Sierra has enemies, which consist of Emerson and the Tiger Twins. She used to be friends with Emerson until she realized his true colors in "And the Revolution Continues."

Sierra is a slender, yet curvy, white lioness. She has green eyes. 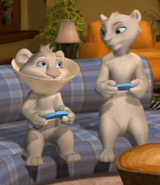 Sierra with her brother Hunter