Silena Beaurgard is the daughter of Aphrodite, and the former counselor of Cabin Ten. In the books she made several small appearances until the Last Olympian where she was shown to be dating Charles Beckendorf. She was a spy for Luke, and ultimately it was her downfall, but she left on the good side. She also appeared in the latest Sea of Monsters movie on Luke's rebellion side.

In The Sea of Monsters film adaptation, she was portrayed by Zoe Aggeliki, as Carrie Compere played the character off-Broadway.

She is noted to be kind and caring to the other campers. Percy once described her as one of the nicest girls in the Aphrodite cabin (far less shallow and conceited than most of her cabin mates), also saying that Silena was a neat freak. She loved Beckendorf, and began to date him after The Demigod Files, but before Beckendorf, she liked Luke and became his spy.

Later on, she stopped liking Luke, leading him to blackmail her into giving him information by saying he would not harm Beckendorf as an agreement. Being a daughter of Aphrodite, she cares strongly for the people she loves. After the death of Beckendorf in The Last Olympian, she becomes filled with guilt, but it doesn't stop her from helping her fellow campers and coming clean before she dies.

In The Titan's Curse, she tells people not to look at her, and Zoe Nightshade replies saying, "A daughter of Aphrodite who doesn't wish to be looked at?" Silena tries to slap Zoe, but is restrained by Connor and Travis. This shows that she can speak out and stick up for herself, and does not stand by just looking pretty, unlike many of her other cabin mates.

It is unknown what Silena definitely looks like, as her appearance tends to change between books. In The Demigod Files, it said that her hair was black and her eyes chocolate brown. In The Last Olympian, she had brown hair and blue eyes and in The Ultimate Guide, her eyes were blue and her hair was blonde. In all descriptions, she is described slim.

It is always stated that she is a very beautiful girl who everyone stares at. Since she is a daughter of Aphrodite, she may have the ability to alter her physical appearances or she simply gets bored of her appearance (likely due to her ADHD) and changes them. However, according to Rick Riordan in an interview, she officially has black hair and blue eyes. 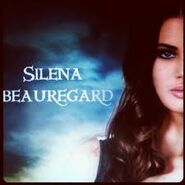 Retrieved from "https://hero.fandom.com/wiki/Silena_Beaurgard?oldid=1731743"
Community content is available under CC-BY-SA unless otherwise noted.