Hanging out with a few of his friends and creating items/tools to help his team win challenges.

Mute Genius
Beverly "B", labeled The Strong Silent Genius, was a camper on Total Drama: Revenge of the Island, as a member of the Toxic Rats.

Due to the fact that he has never spoken, lack of background information, and relatively short time on the show, very little is actually known about B. One thing that can be drawn for sure is that his intelligence level is through the roof, and this has led to the production of many impressive creations throughout his short time on the show. He is able to make the best of any situation and overall is a very useful asset to one's team. He comes across as very relaxed in demeanor and proud of his smarts. The exact reason that B never speaks is currently unknown. On some occasions he has opened his mouth but gets cut off. This suggests that B has no real problem with speech; he just prefers to stay quiet.

B makes his first appearance in Bigger! Badder! Brutal-er! on a yacht bringing the thirteen new contestants in for a new season of Total Drama. He is placed on the Toxic Rats according to when he completes the forest race. B's impressive intellect is presented during the challenge, in which B stacks his teammates on top of each other to reach their totem and cut it down. He later maneuvers his team on the totem as they race down the hill. Although he remains silent during the episode, B manages to communicate with his team by signaling what he needs them to do, with some extra assistance from Dawn. Though his team is the first to arrive at the bottom of the hill, their cabin ends up exploding thanks to the Mutant Maggots, causing them to lose the challenge.

In Truth or Laser Shark, during the "getting to know you trivia game", it is revealed that "B" is actually just an abbreviation for his real name, Beverly, which he is embarrassed about. During the "Mad Skills Obstacle Course" relay race, B takes on the third obstacle. Before doing so, Scott procrastinates giving him their team's mascot, a toxic rat, in order for him to continue. Aggravated, B takes the rat from him and goes through his course, only to fall into the mud pit below filled with two mutated beavers. He manages to outsmart them by quickly building a female beaver out of the mud in the area, and afterwards, B manages to pass his team's rat to Sam. After his team loses the challenge, B is put in the bottom two along with Dakota, but they elect to let him stay another week.

In Ice Ice Baby, B contemplates the pile of random junk provided to help all the contestants climb up the cliff. Using a chair, a compressed canister, rope, baking soda, and a bit of wiring, B launches himself and his team up to the top, winning the first half of the challenge and making him a primary target for Scott. During the second half, he finds a large slab of ice and carves out a reflective surface to melt the other team's fort. Scott, fearing that they will win the challenge, knocks down the sheet, melting his own team's fort and allowing the revelation of Mike having their flag. Before the vote, Scott convinces the other teammates to vote B off by spreading lies about him and convincing them he is bad news. His plan works and B is eliminated. As he prepares to be catapulted off the island, he appears ready to finally break his silence, but Chris doesn't give him the chance to speak.

Along with the previous contestants, B returns to the island for the season's finale, Brain vs. Brawn: The Ultimate Showdown, in which he roots for Cameron to win, along with the majority of contestants. When the mutated animals are attacking the cast, B is repeatedly punched by a mutant tree squid while Dawn asks why her tea leaves didn't see this coming. B and the other competitors are last seen in a speedboat leaving the island. He laughs alongside everyone else when Chris gets arrested. 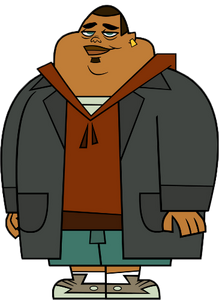 B without his hat.

B in front view. 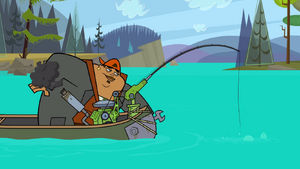 B in the Total Drama: Revenge of the Island intro. 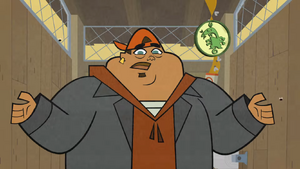 B shrugs in confusion. 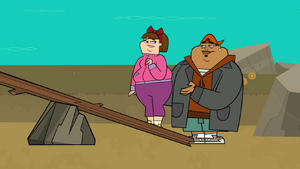 B shows Staci where to stand. 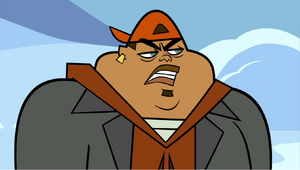 B becomes angry at Scott for framing him. 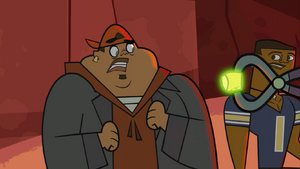 B is the first male to receive the Marshmallow of Toxic Loserdom. 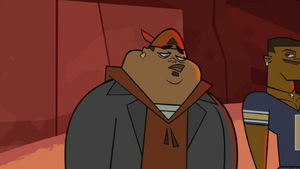