Silk (real name Cindy Moon) is a fictional character and superheroine appearing in American comic books published by Marvel Comics, appearing as a supporting character in the Spider-Man comics, and the main protagonist in her titular comics.

A genius with an eidetic memory, Cindy was bitten by the same spider that bit Peter Parker, and was trained by Ezekiel Sims. She was trapped in a bunker by Sims when Morlun came, and was later released by Peter thirteen years later after he became the superhero Spider-Man. Cindy then became a vigilante, wanting to stop threats and find her missing family. She is also a member of the Champions, Order of the Web, and Agents of Atlas.

She was created by Dan Slott and Humberto Ramos, and first appeared in Amazing Spider-Man Vol 3 #1 in June of 2014.

Thirteen years ago during a demonstration on the use of radioactive rays at a science exhibit, a spider was accidentally exposed to the radiation and absorbed large amounts of it. In its dying moments, the arachnid bit the nearest living thing to it, Peter Parker. As a result, the young teenager would gain amazing powers and become Spider-Man.

However, this was not the end. As mere moments after biting Parker, the spider bites another young student by the name of Cindy Moon. Soon after, Cindy’s abilities manifested but she was unable to control them. Some time later, Ezekiel would approach the Moon family to offer his help and guide Cindy in controlling her newfound abilities. After six years since getting bit and training to use her powers, Cindy is locked up inside a facility by Ezekiel to protect her and the other “spiders” from Morlun and his family called the Inheritors.

Cindy Moon was born in Washington Heights, Manhattan to Albert and Nari Moon, and is the sister to Albert Moon Jr. In her youth, her parents realized that Cindy had an eidetic memory, with her mother wanting her to focus on her studies while she wanted to play hockey with friends.

When she was attending a exhibition demonstrating the safe handling of nuclear laboratory waste materials, a radioactive spider bit Cindy on the ankle after biting Peter Parker on the hand. Cindy's powers manifested when her uncontrollable organic webbing accidently caused her to web her pants, and Ezekiel Sims took her away to train her. When Morlun came, Sims hid Cindy in a room that blocked Morlun's detection to protect her from him. Cindy stayed in the bunker for years, and though she knew the code to leave, she decided to stay in fear of the consequences.

Cindy's story was revealed to Peter thirteen years later, and he decided to free her due to being overwhelmed by the revelation. Cindy tried to warn Peter about Morlun, and attacked him for causing them to be hunted by Morlun. Peter reveals to her that Morlun is dead, and realizing she is free, Cindy made an improvised costume of webs and told Spider-Man to call her Silk. After becoming Silk, Cindy helped Spider-Man battle Black Cat and Electro, with her stopping Felicia from unmasking Peter on live television. When dealing with Electro, Cindy helped Peter depower Electro, and saved innocents from Dillion's explosion. Shen then became an intern at Fact Channel News to find her missing family.

During the Spider-Verse storyline, Cindy was told to stay behind since her presence would attract the Inheritors if she got close to Peter's clone, Kaine. This was due to Cindy being the avatar of the totem of the Bride, and this caused the Inheritors to return and kill most of Superior Spider-Man's team. She then attracted Brix and Bora, and jumped through a portal alongside Spider-Woman and Noir Spider-Man. Drew then switched teleporters with Cindy to help an injured Noir Spider-Man, and Silk was taken to Earth-3145 where she found a safe haven. Eventually, Silk would work with the Spider-Army from different universes, and helped them battle the Inheritors.

After battling the Inheritors, Silk became a vigilante and continued her search for her missing family, but found that their records had been erased. Unfettered by the information, Silk continued her search and battled villains in New York, most notably Dragonclaw and Black Cat. She was then captured by the Repairman after being defeated by Felicia, and learned from him that he had worked with the people who had her family. She would find her brother hospitalized, and the two briefly reunited before Earth-616 and Earth-1610 collided. The two were killed along with everyone else from both universes, but would return but with no memory of her death.

Though she had her brother, Albert had no recollection of where their parents were, and Cindy joined S.H.I.E.L.D. to find them. The agency would have her work undercover for Black Cat's gang, and managed to gain Felicia's trust after dealing with her Earth-65 counterpart. Upon learning that her parents were in the Negative Zone, she rescued them, and they informed her that they went to the zone to cure her powers. Afterward, Cindy went to San Francisco to investigate New U, and created a new identity named "Silkworm". She would drop the title when she returned to New York, and later joined the S.H.I.E.L.D. Academy after quitting Fact Channel News. 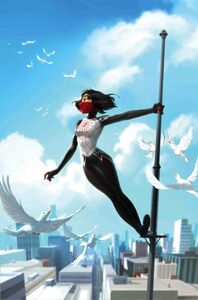 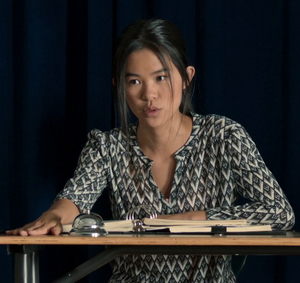 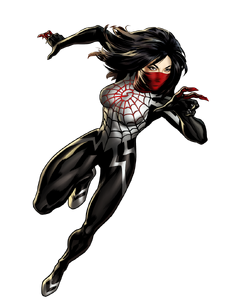 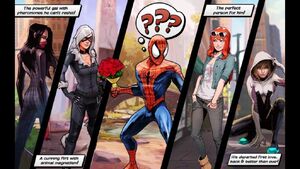 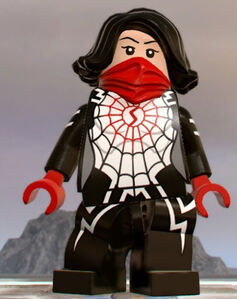