Searching for new students to his dojo

To make Saitama and Genos his disciples and teach them martial arts. (failed)

To find new students to his dojo.
Defend people from evil monsters and criminals. (both ongoing)
Stop and rectify his rogue disciple Garou.

Bang, also known by his hero alias Silver Fang, is the major supporting character of One-Punch Man. He is a martial artist, and Master of the Flowing Water Fist Fighting Style. A kind old man but a stern dojo master, Bang is the first S-Class Hero to witness Saitama's power and has become an acquaintance of his.

Bang appears to be elderly, as he walks with a slight hunch in his back. He has light blue eyes and spiky white hair. He also possesses thick white eyebrows and a thick white mustache and has slightly tan skin. He dons a long-sleeved black martial arts jumpsuit, light-colored pants, and T'ai Chi slippers. In spite of his age and appearance, he has a well-built body that is covered with many scars.

Bang has a stoic personality and often remains tranquil even in dangerous situations (ex: he was able to keep calm even when it seemed a meteorite was about to hit Z-City and nobody could stop it before Saitama arrived). However, he has his moments of surprise, after witnessing Saitama's true power, Bang was left shocked and when he asked Saitama how he got his power he was mute in surprise after the baldy told him he was just "lifting weights", Bang also has his moments of comedy; the most recurrent is trying to convince in any way people to join to his dojo, be it Saitama or Genos or even members of the Blizzard group.

Bang is very wise and does occasionally give advice to both Genos and Saitama (though neither of them takes his words very seriously) as well trying to get Garou on the side of good, but fails in this goal.

After Garou's rampage and the left of most of his students (along with the incompetence of his last student Charanko) has left Bang wishing for new students and the happy life that once existed in his dojo, which is the reason he keeps looking towards more students in the hope the dojo can be like before.

Of all the superheroes, Bang is one of the very few true heroes, who never takes too much pride in himself and cares more about helping others than being famous. He severely criticized the Tanktops brothers for blaming Saitama for the destruction of the city and bringing people against him, as well hating or disrespecting most S-class heroes because of their cocky personality and brutal methods, and is one of the few individuals to like and respect Saitama not just for his power but also for his heroism.

As an S-class hero and the third-ranked one, Bang is a very powerful and skilled hero despite his elderly age, with years of training in his martial artist fighting style water stream rock smashing fist making one of the (if not the most) proficient fighter in the One Punch Man series. While his martial arts prowess makes him a dangerous opponent to beat, he does not slouch in terms of physical power and can defeat many dragon-level with ease and was even able to overwhelm Garou in hand-to-hand combat and martial arts even after the later power boost and own experience and skill in martial arts. 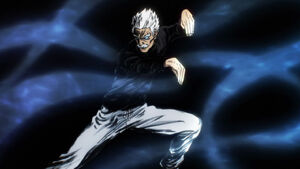 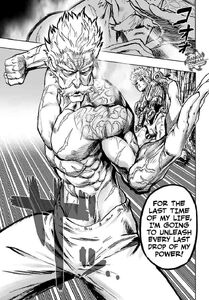 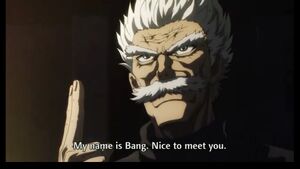 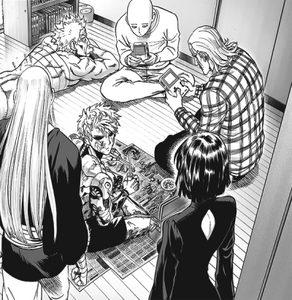 Bang with Saitama, Genos, King and his brother Bomb in Saitama's apartment. 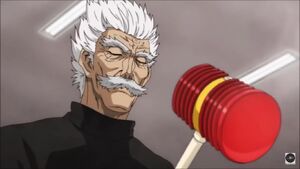