Help Galactus to devour entire planets in order to save his home planet (formerly).

Save Earth from Galactus (succeeded).
Protect the universe from threats.

Silver Surfer (real name Norrin Radd) is a superhero from the Marvel Comics universe who was the former Herald of Galactus but rebelled against his master in order to protect Earth - as punishment he was stripped of his title as Herald but kept his cosmic powers, which he now uses to fight against powerful villains from across the universe.

He was created by the late Jack Kirby, and first appeared in Fantastic Four # 48 in March of 1966.

Norrin is the son of Jartran and Elmar Radd, and was born on the planet Zenn-La, which held people who were advanced humanoid that had advanced technology. Norrin was named after a revered scientist named Norrin Konn, who was responsible for raising Zenn-La from his barbarism, to its advanced utopia.

Elmar killed herself due to being ill-suited to the stifling environment, but Jartran continued to raise Norrin as a intellectual youth, and encouraged him to seek knowledge and to advance. Despite this, Jartran would later commit suicide after being accused of idea theft, but he had another lover and fathered a son named Fennan. Norrin would grow up into a relentless person, who longed for challenge and struggle, and studied for the ancient past.

His life changed forever when Galactus invaded Zenn-La, and intended to consume the planet until Norrin offered to become his herald. Galactus agreed, transforming Norrin into the Silver Surfer, and became his servant to seek out new worlds for him to sate his hunger.

Radd served Galactus for decades (most likely 100 years), and enjoyed exploring the universe despite aiding a cosmic being to destroy planets. The destruction of the first inhabited planet nearly drove the Surfer mad, but Galactus altered his mind, submerging his emotions, and suppressing his past memories. As a result, Radd became more willing to lead Galactus to worlds, coming across Massikron, Elynore-143, Draven-Barr, and eventually Earth.

During his service of Galactus, Silver Surfer encountered the planet Klyntar, and was attacked by the planets inhabitants - symbiotes. The symbiotes attempted to imprison the herald, but he managed to break free and escape, and later sacrificed the world Joot, which was conquered by the symbiote Imperium. As a result of leading Galactus to the conquered world, the symbiotes garnered hatred for the Silver Surfer.

The Silver Surfer located Earth for Galactus despite Uatu the Watcher attempting to ward him off, and caused widespread panic and fought the Fantastic Four. During his time on Earth, the Surfer met Alicia Masters, who pleaded with him to spare humanity from his master. The Surfer eventually turned on Galactus due to his emotions stirring up due to Alicia, and fought him long enough for the Fantastic Four and Uatu to secure the Ultimate Nullifier. After losing the nullifier, Galactus was forced to withdraw; however, he punished the Surfer by trapping him on Earth.

Unable to leave the planet due to a cosmic barrier created by Galactus, the Surfer became a wanderer. After having a skirmish with the Thing over Alicia, the Surfer befriended Doctor Doom. However, he was betrayed by the villain, who imprisoned the Surfer and stole his cosmic power for himself. The Surfer eventually got his powers back after Doctor Doom collided with Galactus' barrier, and continued his journey to understand humanity. He became increasingly pessimistic about humanity, and tried to befriend the Hulk, but was driven away by the monster's anger. Next, the Surfer gave the Mad Thinker's computer, Quadimodo, a humanoid form out of a pity. However, he was forced to petrify his creation after it proved to be criminally insane, much to his sadness.

Convinced that humanity was a savage race, the Surfer decided to attack them until he was stopped by the United States Military. The military struck him down with a draining "Sonic Shark" missile based on technology developed by Reed Richards, and the Surfer humbled himself and continued to wander. The Surfer was shown the errors of his ways by the Fantastic Four, and they helped him resist attempts by Galactus to regain his services.

The Silver Surfer also battled Badoon, Loki, Mephisto, Doomsday Man, Yarro Gort, Warlock Prime, the Abomination, and the Flying Dutchman. In addition, the Surfer would reunite with Shalla-Bal, who was used as an unwilling pawn by Mephisto and Yarro Gort, and the two would always be separated. During this time, Psycho-Man influenced the Surfer's aggression, causing him to battle Spider-Man, Human Torch, S.H.I.E.L.D. and the Inhumans. However, when Doctor Doom temporarily usurped Galactus' powers, the Surfer helped the heroes defeat him.

The Power Cosmic: The Silver Surfer possesses the Power Cosmic, which is the core from which his other abilities manifest from. This power was granted to him by Galactus, and amplified during Annihilation. 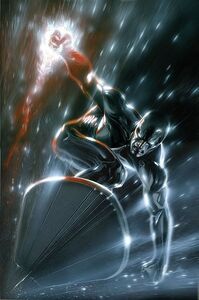 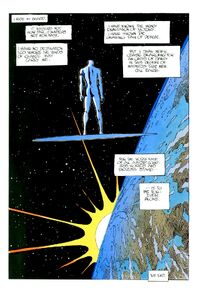 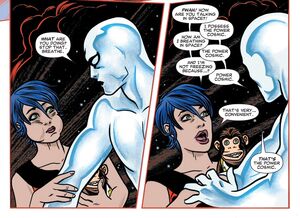 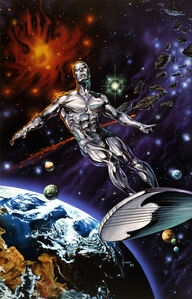 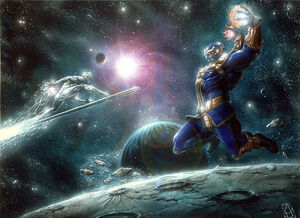 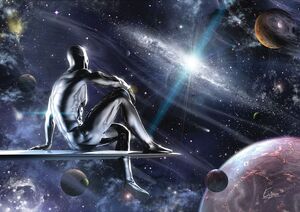 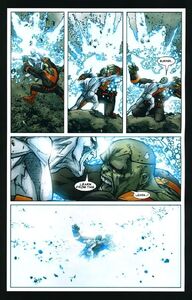 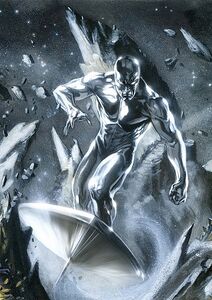 He surfs and he's silvery. 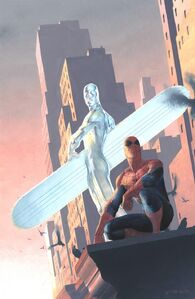 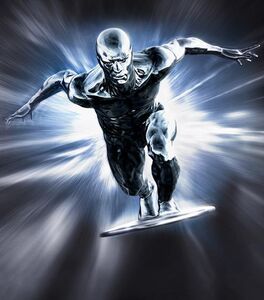 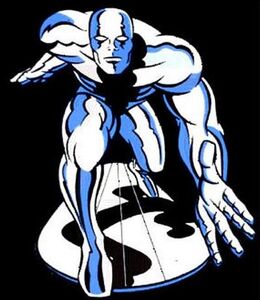 Silver Surfer in the animated series of same name. 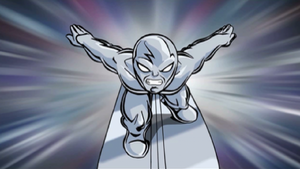 Silver Surfer in Hulk and the Agents of S.M.A.S.H.
Add a photo to this gallery 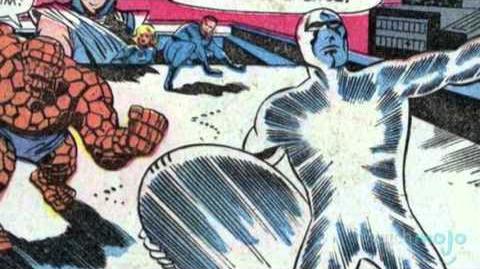 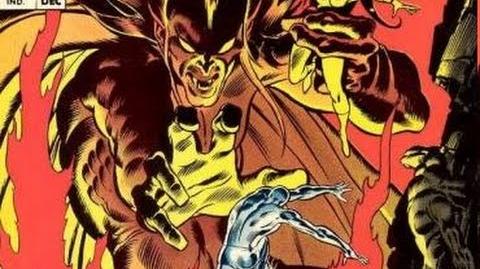 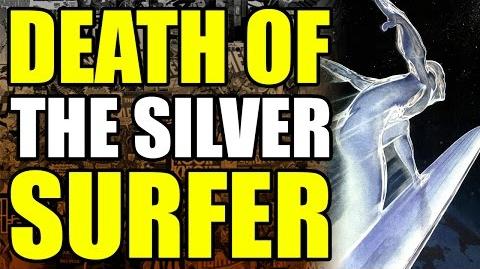 Retrieved from "https://hero.fandom.com/wiki/Silver_Surfer?oldid=1927837"
Community content is available under CC-BY-SA unless otherwise noted.