Being in his office.

Make sure the tourists are safe (succeeded).

He was portrayed by the late Irrfan Khan.

Simon Masrani was born to Sanjay Masrani, founder of Masrani Global Corporation and its first subsidiary, Mascom, and an unknown mother in Bombay (now Mumbai), India, in 1967.

When his father died in 1992, the possession was passed down to Simon. He expanded Mascom's services beyond just satellite television, and into weather and telecommunications. Though what put Masrani Global Corporation into recognition was the foundation of Masrani Oil (now Masrani Energy) in Abu Dhabi in 1996, which despite being the youngest oil company in the world, it generated the third largest income for any company from 1997 to 2004.

Simon Masrani began talks to acquire InGen in 1997 after hearing the creation of a hybrid plant named Karacosis wutansis made by Henry Wu and his team of geneticists. InGen was in a poor financial state from the failed attempts of creating a park with living dinosaurs, one on Isla Nublar that spiraled out of control after their computer programmer Dennis Nedry disabled their park's security system by using a virus known as Whte rbt.obj and when they tried to create one on San Diego, Californa which resulted in a male Tyrannosaurus rex causing havoc throughout the city after he broke out of his confinement. However, the final blow to the bioengineering company was when their founder and CEO John Hammond passed away.

Masrani Global successfully acquired InGen in 1998. Simon Masrani decided to use the company he had acquired to fulfill John Hammond's dream of a functioning dinosaur park open to the public. After discussing his idea with high-ranking members of his company and with Dr. Henry Wu from InGen he put his plan into motion. The next year, his company gained limited access to Isla Sorna and Isla Nublar, which allowed for the construction of his park to begin. In 2002 he founded Timack Construction to help subsidiary Axis Boulder Engineering in planning, preparing, and activating construction of the park that was to be called Jurassic World. Construction lasted till 2004 with a total of $1.2 billion spent on concrete and building materials.

During Jurassic World's construction, Simon appointed Vic Hoskins to reinvent the InGen Security Division. Vic was chosen because of how professionally he and his team handled an operation in 2001 involving three Pteranodons from Isla Sorna roaming Canada after they were accidentally freed near the end of an incident that occurred the previous year.

InGen Security also defended the construction workers on Isla Nublar from its wildlife and they currently protect Jurassic World ever since its opening.

In 2005 Jurassic World officially opened and had 98,120 in its first month of operation, proving itself to have been a highly successful venture.

In the 2010s, his dinosaur park's success began to dwindle in 2011, raising concern in investors. In April 2012, after going to a board meeting in April 2012, Simon gave Dr. Wu authorization to create a new species to satisfy investors. The project was kept secret for over four years with the development of the hybrid starting in 2012 after he had sent the message to Dr. Wu. The January 2015 post of Masrani CEO's Blog mentioned that Indominus rex was developed over the course of three years. While spending the 2015 new year in Shangai, China, he revealed Indominus rex on his personal blog five months before her enclosure was open to the public. Simon boosted funding for InGen Security in January 2015, six months before she was open to the public.

After Chinese New Year had passed, he traveled to London for IventiCon 2015 to be among the Masrani employees showcasing his company's latest technologies.

Weeks before the opening of the Indominus rex Paddock Simon visited his dinosaur theme park Jurassic World. While there he told Senior Assets Manager Claire Dearing to offer Velociraptor trainer Owen Grady a job to check for any security flaws in the I. rex's paddock.

When the Indominus rex escaped, he, Lowery, and Vivian were among the InGen personnel watching from inside the park's control room and ordered Lowery to close the door to the Indominus rex enclosure and wound up operating the door controls himself when Lowery refused, due to Owen still being in the pen. But the door failed to close in time and the Indominus rex managed to free itself.

Masrani later prevented Vivian from putting out a park-wide alert regarding the Indominus rex's escape, believing the Asset Containment Unit could recapture the dinosaur without causing a panic. He would soon be proven wrong when the Indominus rex killed the teams led by Katashi Hamada and Austin after first clawing out its tracker to throw them off. Masrani angrily confronted Dr. Henry Wu over the traits the animal had and, upon learning of the many modifications that were added without his consent, informed him that his work had committed crimes against nature and that it would be seized by the company's board of directors.

In an attempt to finally stop the dinosaur, Masrani boarded JW001 with an ACU trooper and gunner and pursued it through the park. But the Indominus rex escaped into the Jurassic World Aviary and caused Pteranodons to leave the enclosure. The Pteranodons promptly attacked the helicopter, killing the co-pilot and gunner and severely damaging the helicopter. Masrani attempted to regain control, but the helicopter was too badly damaged and crashed through the Aviary before smashing into the ground. Masrani was killed in the ensuing explosion.

Although Masrani himself never makes an appearance in the series, he is mentioned several times. The Camp Cretaceous campers Darius Bowman, Kenji Kon, Brooklynn, Yasmina Fadoula, Sammy Gutierrez, and Ben Pincus see Masrani's helicopter pursue the Indominus rex as she heads towards the Aviary, though the kids also witness the helicopter attacked by the pterosaurs and crashing into the Aviary before it explodes, confirming his death.

Masrani proved to be a shrewd and intelligent businessman, but he was actually a kind, caring, and scrupulous-hearted man. Like John Hammond before him, Masrani was less concerned over Jurassic World's profits, and more towards ensuring its guests were enjoying themselves. He enjoyed life and encouraged others to do so as well, as seen when he suggested Claire Dearing take some time off to relieve herself of stress. He also appeared to enjoy cheering others up in hard situations, like when he asked the troopers on his helicopter whether their military generals flew into battle with them like he was doing.

Despite his position, he had a tendency to indulge in childish flights of fantasy, such as pursuing a helicopter pilot's license and volunteering to pilot a helicopter-based assault on the escaped Indominus rex despite having no military training. This overly-innocent view of the world was what ultimately allowed the development of the Indominus rex in the first place, unaware of the danger its creation would pose to the park guests, as well as his own demise in trying to atone for the mess his ignorance had caused. Yet he was quick to assume responsibility as he decided to take on the hybrid by piloting a chopper armed with the mini-gun from the armory Owen mentioned earlier.

Masrani was very well-liked by his employees, as shown by their distraught reactions when he was killed. 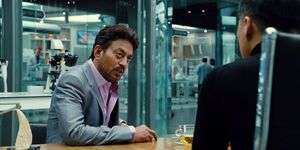 Masrani confronts Dr. Henry Wu about the genetic makeup of the Indominus rex.